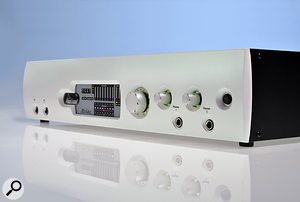 Prism Sound have only just announced their new Titan audio interface, and already they're readying their next. The Atlas is the newest in the line of Orpheus-derived interfaces and is set for a launch at the NAMM show in Anaheim later today.

Designed with Prism Sound's latest and award-winning CleverClox clocking technology and incorporating eight of the company's popular mic pre's as standard, this latest addition to the USB interface family is aimed squarely at multitrack recording applications. Atlas offers recording professionals ultimate quality analogue and digital I/O for Mac or Windows PC at sample rates up to 192kHz via a simple USB interface. In addition to the USB host interface, Atlas also features Prism Sound's new MDIO interface expansion slot, which was first incorporated into Titan and announced at AES New York in October 2013. Using this miniature expansion slot users can, for example, directly connect to Pro Tools|HDX systems. A range of other MDIO interfaces is planned for later introduction. Atlas will also run with Apple and Windows native applications over USB.

Graham Boswell, Sales Director of Prism Sound, says: "The biggest news for Prism Sound customers is that now Atlas, Titan and Lyra all will be capable of aggregated operation in both MAC and Windows PC environments. This makes it possible to link up a number of different units for multichannel applications – for example 24 track, 32 track – or even bigger set-ups – while retaining a USB connection for each unit. In the Windows environment, Prism Sound provide a new driver that aggregates the units and presents a single multitrack interface to your DAW application for I/O routing. This gives our customers enormous choice and flexibility and we are confident that countless more hit records and blockbuster film scores will benefit from Prism Sound's acclaimed converter performance thanks to the ongoing development of our interface range."

As with all Prism Sound audio interface products, Atlas has been specifically designed to meet customer demand. The unit draws on Prism Sound's conversion and clocking expertise developed over many years in products ranging from the AD-2 and DA-2 and the popular ADA-8XR modular converter to Orpheus and the latest releases, Lyra and Titan. It offers eight analogue inputs, eight analogue outputs plus S/PDIF and TOSLINK optical digital I/O ports. The optical ports can also be used for ADAT, giving a single Atlas unit a maximum capability of 18 concurrent input and output channels plus dual stereo headphones.

Atlas also features high quality digitally-controlled preamplifiers – eight for microphones and two for instruments, which are automatically selected when the respective sources are plugged in. An assignable rotary control is provided for monitoring or output level control, which can be applied to any desired set of output channels. In addition, dual stereo headphone outputs are provided, each with its own volume control.

Building on the versatile DSP features of the Prism Sound Orpheus and Titan interfaces, Atlas has a powerful built-in DSP engine which provides high precision input and output conditioning functions, as well as a fully-featured mixer for every Atlas output channel, including ADAT channels.  Each output can be driven with its own zero-latency mix of input channels and DAW feeds, allowing flexible performers’ foldback feeds to be created, as well as stereo or 5.1/7.1 surround monitoring feeds, controlled by the front-panel rotary control if desired. Titan’s high quality analogue outputs are ideally suited for use with analogue summing boxes.

All of Atlas' functions, aside from the front panel monitor and headphone level controls, are controlled from a dedicated Control Panel app, which opens on-screen as a separate panel alongside the user’s existing editing software.

"Launching three new products in less than a year is a record for Prism Sound and indicates our determination to offer recording professionals a wide choice of the high quality, richly featured and competitive tools that they want and need," Graham Boswell adds. "We are on a roll now, so watch this space because we have even more exciting new products scheduled for 2014."
Atlas will be officially unveiled at NAMM 2014, which runs from January 23rd – 26th in Los Angeles, USA. For more information please visit