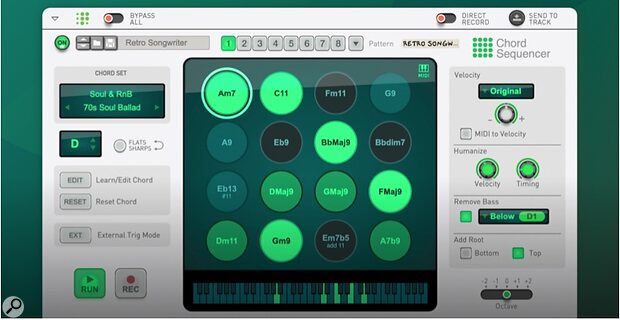 Reason Studios have announced the release of their latest Player device, Chord Sequencer. Featuring more than 50 chord sets offering a total of over 900 chords, this new device is aimed at helping those still mastering their keyboard playing as well as offering new inspiration to seasoned players.

Reason Studios say that each chord set is made up of 16 interesting and perfectly curated chords organised by genre or mood. When a chord is played, a unique suggestion feature lights up other chords with different shades of green to indicate how ‘appropriate’ they are as a next step in a progression.

Whist Chord Sequencer has been designed to help players along the way, music makers are still left in full creative control, with the device allowing users to edit and add new chords as well as building their own progressions using the built-in sequencer.

“We built Chord Sequencer to make it quick and easy to explore chords you might not think about playing. A way to avoid your muscle memory and play something new. Put together by seasoned musicians, the Chord Sets are flavourful with both expected and surprising harmonies.“ says Reason Product Manager Mattias Häggström Gerdt.

Chord Sequencer is exclusive to the Reason platform, although it is available to users of other DAWs via the Reason Rack plug-in (VST3, AU, AAX).

Reason+ subscribers will already have access to Chord Sequencer but it is also available as a separate device through the Reason Studios Add-On Shop for those without subscriptions. It will retail at $6974 Euros, with an introductory offer price of $4954 Euros until 13 July 2022.