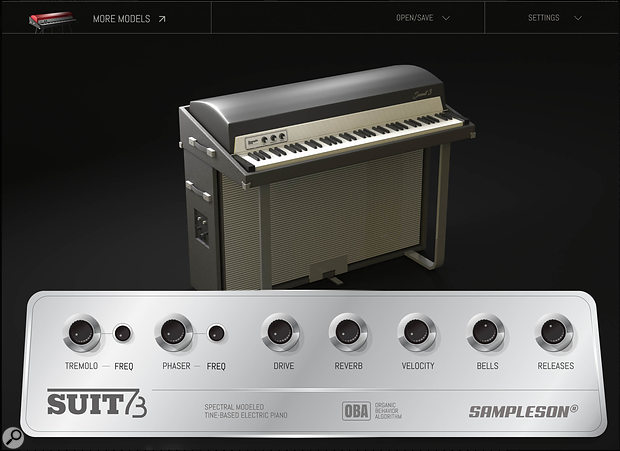 Software instrument makers Sampleson call themselves “virtual luthiers”, and for good reason: rather than rely on lots of individual recordings of notes to reproduce the sounds of various instruments, they focus on physical modelling — that is, the process of producing the sounds of instruments mathematically, in a sort-of reverse Fourier analysis.

The jury is still out on which sounds better, although many proponents of the latter say that physically modelled instruments sound and feel more ‘real’ to play, possibly because no two notes will ever be repeated identically, as can happen with samples. But one very tangible benefit is that, while a modern sampled instrument will typically take up dozens of gigabytes of hard-drive space, and place some pretty severe demands on your system’s RAM, physical modelling instruments can be as compact as a few dozen megabytes, and will be hardly more taxing on a powerful computer than running a game of Minesweeper.

And so it is with Sampleson’s newest instrument, the SUIT73. Based on the classic Fender Rhodes electric piano, SUIT73 includes all the expected effects (drive, phaser, tremolo, reverb), has adjustable timbre components (named ‘bell’, ‘release’, ‘key noise’, ‘resonance’ and so on), and — being devoid of samples altogether — no velocity switching. It also takes up just 35MB of disk space and is said to be extremely CPU-light.

Even better, it’s also extremely cheap, at just $59, and with an introductory price of only $39. As for the sound? Why not judge for yourself by watching the video below.