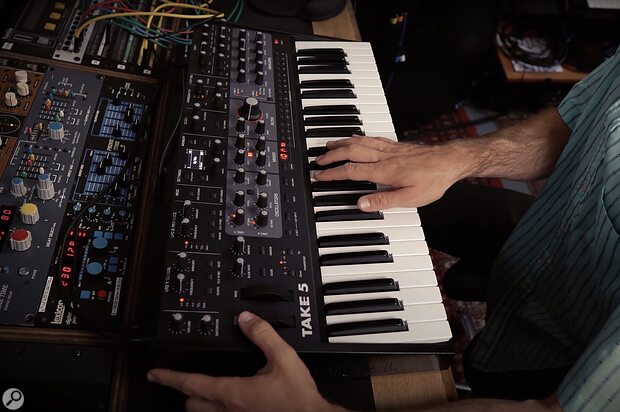 Sequential have just released a compact, affordable, five-voice polysynth, called the Take 5. Each voice is powered by two analogue VCOs, each with variable wave shapes (sine, saw, and variable pulse), sync'ing of osc 1 to 2, optional keyboard tracking for both oscillators, and frequency modulation. Oscillator 1 further features its own square-wave sub-oscillator.

In terms of its architecture, the Take 5 is pretty traditional, with the twin oscillators passing through a mixer (which lets you set the relative levels of osc 1 and 2, the sub-oscillator, plus a white-noise generator), and thence to a resonant, four-pole, low-pass filter, based on that of the Prophet 5 Rev 4.

There are two envelopes available, each with five stages (ADSR plus delay), and each being routable to the amplifier, gate or filter (or any combination). Velocity can be used to control envelope modulation amount, and filter envelope modulation is bi-polar.

Naturally, there's an LFO available for cyclic modulations, and this has a choice of five wave shapes: triangle, saw, reverse saw, square, and S&H. It can be sync'ed to either an internal or MIDI clock, and like the envelopes it can be directed to multiple destinations.

A top-panel knob marked Vintage progressively introduces fluctuations in the frequencies of the filter, oscillators and envelopes, to recreate the sound of vintage (and less stable) instruments.

On the performance side, the Take 5 sports a 3.5-octave semi-weighted Fatar keybed, which outputs both velocity and monophonic aftertouch, the latter of which is again freely assignable to multiple destinations. Also present are a spring-loaded pitch wheel (with selectable ranges per program, and configurable upward and downward pitch-bend ranges), a Portamento switch (for polyphonic glides), a Unison mode (for turning the Take 5 into a five-oscillator monosynth), a Hold switch, and a switch marked Factory, that sets the top panel to 'live' mode so that all the internal parameters are exactly what's shown on the panel.

The Take 5 further features a built-in arpeggiator, plus a 64-step polyphonic sequencer, both of which can be sync'ed to MIDI clock.

On the I/O side, the Take 5's rear panel houses a main stereo output, a headphone jack, sustain and expression pedal jacks, the classic MIDI in/out/thru trio, and a USB port, which facilitates bi-directional MIDI communication. Oh, and it's also got a built-in power supply, and requires a simple IEC mains connection to operate.

The Take 5 is available to buy now, and carries a US price of $1299. Check out the video below to hear it in action!