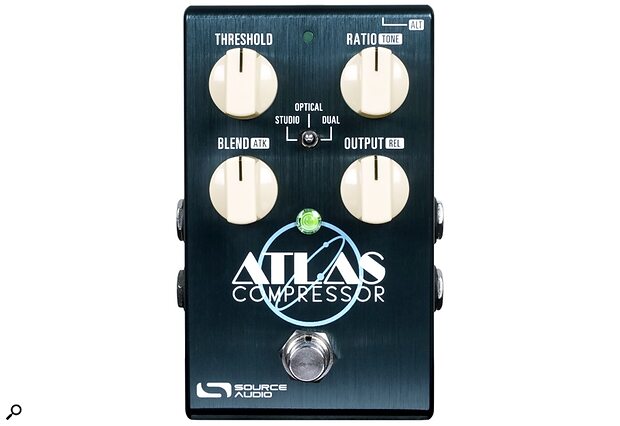 Guitar pedal manufacturer Source Audio have released the Atlas Compressor, the latest device to join their extensive range of pedals. Six different styles of compression are on offer, modelled on a range of devices from classic stompboxes to high-end studio units such as the 1176 and LA2A. A dual-band mode provides independent controls for high and low frequencies, and a blend control provides parallel compression functionality. The pedal supports mono and stereo operation, and according to Source Audio will also accept line level signals.

The top of the pedal features four control knobs, a three-position toggle switch for changing between presets, and of course, an on/off footswitch. Each control knob has an alternative function which can be accessed by holding an ALT button on the back of the pedal, giving a total of eight adjustable parameters (Threshold, Ratio, Attack, Release, Makeup Gain, Tone, Blend and Output). The ALT button also makes a second bank of presets available on the toggle switch, giving a total of six storable sounds with a red/green status LED providing a visual indication of the current active bank. Atlas also features an Optimised For Bass mode, where all of the presets are adapted specifically to respond appropriately to a signal from a bass guitar.

Expression pedal and MIDI connectivity allow the Atlas to be controlled by external devices and yet more additional functionality is provided by Source Audio’s Neuro Editor application. Available as a desktop or mobile application, this editor software provides in-depth control over all of the pedals parameters and routing options, as well as providing a whole host of additional controls and features such as lookahead compression, soft knee control, graphic equalisation and many more.