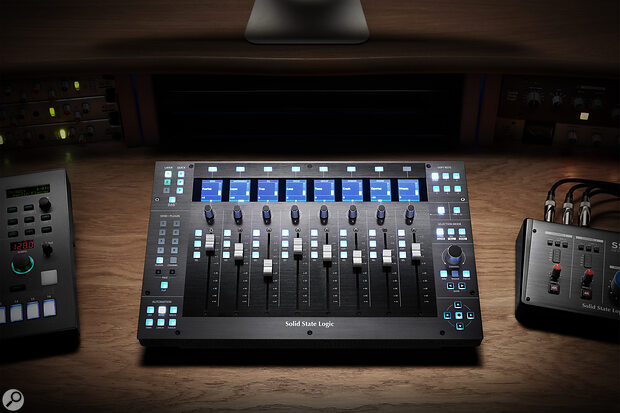 SSL are no strangers to the world of DAW control — their AWS, Duality, Matrix and Nucleus consoles have all offered some form of hands-on interaction with recording software — but until now they've never made a truly standalone hardware controller.

The newly announced UF8, priced at £999/$1299, is exactly that: an eight-fader surface, with motorised and touch-sensitive faders, assignable encoders, illuminated buttons throughout, and a hi-res OLED screen above each channel strip.

The UF8 offers switchable control over multiple DAWs thanks to its implementation of control layers, and DAW support is extensive, because it uses the established Mackie Control and HUI MIDI-based protocols (albeit heavily built upon to work around those protocols' limitations). Connection to a computer is via USB, and you can use up to four UF8s simultaneously to build a 32-fader surface. Cleverly, SSL have made it possible to assign different functions to the many controls in a multi-surface setup, so that you won't simply end up with three identical and redundant sets of transport controls, for example. 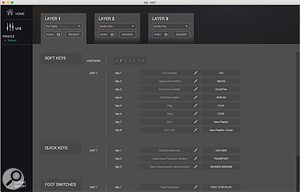 The SSL 360 app allows you to customise the UF8's control functionality.Control assignment is carried out in an accompanying app called SSL 360. Here you'll find preset layers for controlling Pro Tools, Logic, Ableton Live, Cubase and Studio One, though you should be able to configure it to work with any DAW that supports Mackie/HUI control, of course. SSL 360 lets you assign common modifier keys like Shift, Control, Alt and so on to the UF8's soft keys, and it also lets you create your own macro key combinations, so you can use macros even in DAWs that don't otherwise support them.

SOS has been using a UF8 for a number of weeks now (under strict NDA, of course), and we're happy to report that the look, feel and build quality is everything you'd expect from SSL. We've also been particularly impressed by SSL's additions to the Mackie/HUI protocols, which greatly extend its functionality compared with older DAW controllers.

Read the SOS in-depth, hands-on test of the UF8 today (from the coming March 2021 issue of Sound On Sound).