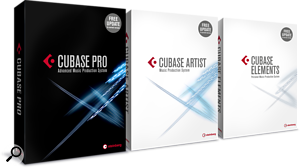 Steinberg have today announced Cubase 9, a substantial update to their DAW. The three new versions of Cubase — Cubase Pro, Cubase Artist and Cubase Elements — all feature a new layout with an Ableton/Logic Pro-esque 'Lower Zone’. This is a dedicated and context-sensitive area at the bottom of the screen that can show either your mixer, MIDI note data or another one of the new features: Sampler Track. The Sampler Track really does look rather useful, allowing users to drag and drop samples from the library or from the arranger onto a sampler instrument and have them automatically mapped across the keyboard.

Third up is a Cubase Pro only feature: Frequency is the new EQ processor with eight bands, each with the new Linear Phase mode to preserve the band’s signal phase. There is also M/S support, Auto Listen to monitor adjustments, Spectrum Display and reference keyboard. Cubase Pro 9 also comes with up to ten marker tracks, providing users with even more freedom to specify ranges within music projects and to use these to export individual stems and group mixes.

Cubase has always had an Undo feature, but until now, this hasn’t extended to the mixer. In Cubase 9 Mix Console History is introduced — a Photoshop-style undo history which logs every change to your mix, including any third-party plug-in tweaks. This way, if you accidentally nudge a fader or just plain hate what you’ve done to the mix in the last 10 minutes, you can roll back.

The Cubase Pro (€579), Cubase Artist 9 (€329) and Cubase Elements 9 (€99.99) full retail versions are available from resellers and through the Steinberg Online Shop from today.