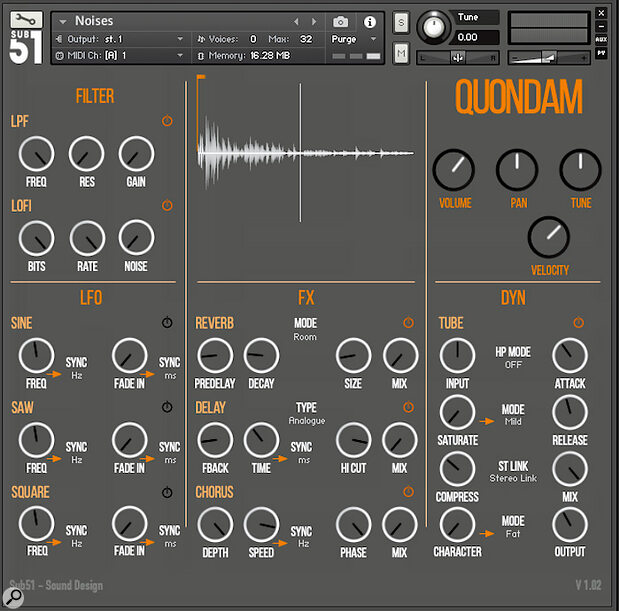 UK sound designers Sub51 say they are always open to a challenge, so when it was suggested they create a varied sample library of pads, rhythms, drones, loops, effects, lead sounds and basses using only sounds sampled from a bass guitar being played, hit or scraped, they were only too happy to oblige.

Requiring the full version of Native Instruments' Kontakt (6.6.0), QUONDAM's contents are divided into Bass Instruments, 'Clicks, Pops and Scrapes', Dark Arp Loops and Slices, and Rhythmic Loops and Slices. MIDI files also complement loop-based samples. In all there are over 300 patches which may be further modified by Pan, Tune, Envelope and Velocity controls as well as resonant filtering, lo-fi transformations, saturation and host sync'd multi-wave LFO variable fade-in time. 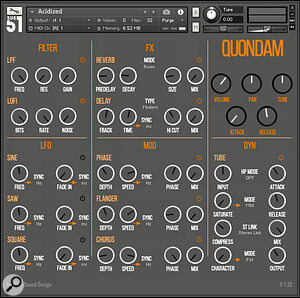 Komplete Kontrol users will also be able to get deep and fully hands-on with QUONDAM's parameters via its intuitive layout and snapshots.

Sub51 founder Paul Joyner says: "QUONDAM will appeal to genres such as Ambient, Electro, Ethera, Experimental, EM and more but in reality the only limitation is your imagination."

QUONDAM can be purchased from Sub51's website where you might find some early-bird deals, but it represents good value at the usual £19.95 price and can be run on multiple computers by the purchaser.