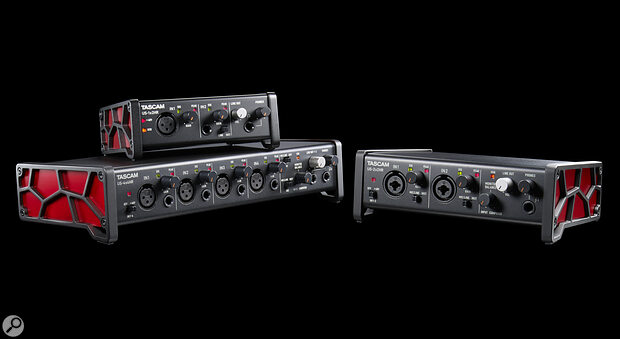 Tascam have just announced a new range of USB audio interfaces, which they're touting as being ideal for mobile musicians, podcasters, streamers and home studio owners. Building on the established US series, the newcomers add 'HR' (for 'High Resolution) to the name, and are said to offer significantly better conversion quality, preamps and latency performance than their predecessors.

The smallest is the US-1x2HR, which can record two channels simultaneously. These can come either from the mic XLR and a line/instrument jack on the front, or be switched to a stereo line pair of RCA phono sockets on the rear. On the output side is another pair of unbalanced phonos (intended for a pair of monitors, and with a front-panel volume control), and these are mirrored on a quarter-inch stereo headphone socket (also with its own independent level knob). Two switches on the back provide for direct monitoring (by feeding the analogue inputs directly to the outputs, negating latency), and phantom power, for active DI boxes and capacitor microphones.

In the middle of the range sits the US-2x2HR, which sports a pair of mic preamps, each with a 'combi' XLR/jack socket capable of accommodating mic, line or instrument signals. The line outputs have also been upgraded to balanced TRS jacks, and the direct monitoring feature has been expanded to include a user-adjustable input/return balance knob.

Common to all the new US-HR interfaces is a pair of 5-pin DIN MIDI sockets, signal and peak LED indicators on the inputs, and the ability to run on USB power (though you can hook up a PSU if your USB port doesn't provide enough power, or you're using the interface with a phone or tablet). All can run at up to 24-bit/96kHz, and will operate with buffer sizes as small as 4 samples, for ultra-low latency. They're priced keenly too, with the US-1x2HR costing £113, the US-2x2HR selling for £144, and the US-4x4HR shipping for £231. The new Tascam US-HR range is set to go on sale in December.