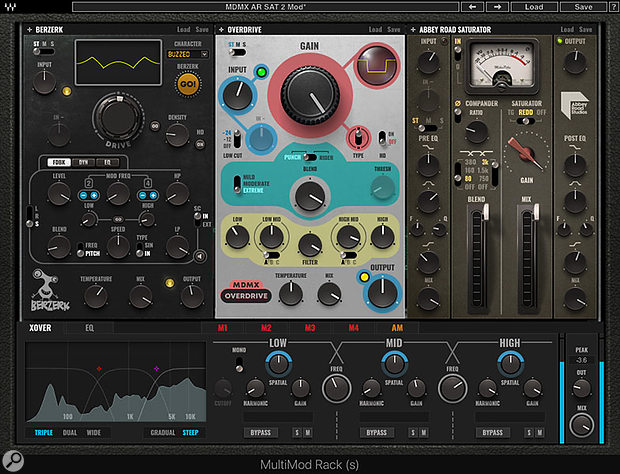 Plug-in giants Waves have released MultiMod, a multi-band processor that can host three of Waves' own distortion plug-ins and apply them to three user-defined frequency bands. The three processors, in order of how much distortion they supply, are the vintage-modelled Abbey Road Saturator, the fuzz/overdrive MDMX effect, and the appropriately named Berzerk wave-shaping plug-in. Any of those processors can be used on any of the bands, so you can have a smooth high end and a fuzzy low band, or a gritty mid-range, or any combination you like.

But perhaps what gives MultiMod its greatest creative potential is the modulation options. There are five modulators, including an LFO, a sequencer and an amplitude-modulator, which can be assigned to any of the parameters in any of the three distortion plug-ins. And after you've sufficiently mangled and modulated your audio, you can apply MultiMod's global post-processing EQ (which can also be modulated!), as well as built-in reverb, delay and chorus effects.

To help you make sense of MultiMod's enormous potential, Waves are providing hundreds of categorised presets, including some conjured up by big-name engineers including Joe Barresi, Jacquire King, Michael Brauer and Juno Reactor.

Waves MultiMod retails for $99, but is currently on sale for just $49. You can see a video of it in action below.