The Boss Waza Craft Tube Amp Expander almost seems designed to a brief of addressing some of the perceived limitations of competing products, specifically: overcoming the concerns of those who feel that a single impedance curve is not sufficient in a reactive load; offering an open system that can accommodate third-party impulse responses; facilitating continuous, 'un-stepped' volume control when used as a 'virtual attenuator'; remote switchable, and with extensive MIDI implementation for live use; and offering bi-directional digital audio paths that allow it to operate as a DAW interface.

It does indeed do all of those things, many of them very well. In its 'virtual attenuator' mode (it actually fully loads and then re-amps) you can get a tube amp into its 'happy place' and listen to it at any volume you like. There's even the option to switch in a compensating Fletcher-Munson correction to boost low and high frequencies when the 're-amping' volume is set very low. The reactive load preserves the dynamic behaviour of the output stage — the 'feel' experienced by the player — and that is translated via the neutral, solid-state power amp through to whatever real speaker(s) you have it hooked up to. The key issue is, how well does the dynamic behaviour of the amp survive the trip? Two things are crucial here in properly assessing and understanding the outcome, I find: one is that you use 'normal' amp settings — if you don't normally listen to your amp on 10, now is not a good time to start — and the second is that you do your initial listening test at something close to performance volume from the speaker. There is no process that compensates for "the magic of loud", as I've heard it described. Experience it loud first, and then you should be able to know if any adjustments you are making when you turn it down are just to compensate for 'lack of loud'.

Does it sound exactly the same as the amp straight into the speaker? I don't quite think it does, any more than the OX does. But does it sound and feel good in its own way? Yes, very much so. It allowed me to greatly enjoy some of the amps I have that are now considered anti-social — and equally joyful, at the other extreme was hearing a diminutive H&K Tubemeister 5 at stage-viable volume! The integral power amp claims 100W into 8Ω, and can get very loud even into a single, 8Ω 12-inch driver! 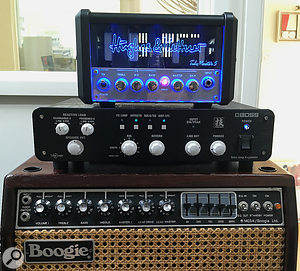 “It allowed me to greatly enjoy some of the amps I have that are now considered anti-social — and equally joyful, at the other extreme was hearing a diminutive H&K Tubemeister 5 at stage-viable volume!”To keep things as clean and neutral as possible, I performed all my initial testing of the load and power-amp combination with all internal processors disabled. This is still not an all-analogue path — you are passing through the 32-bit/96kHz converters — but I can't say I perceived any tonal artifacts or latency attributable to a very well-spec'ed A–D stage. Starting to work with the effects and processors, the compressor proves useful for putting back some 'bounce' when playing more quietly than is ideal, and reverb and delay are all the better for being post-amp, but the absence of a dedicated modulation block feels like an omission. I know there is an effects loop and integrated MIDI switching available to work with an additional effects unit, but that is another thing to carry and rig for a gigging player. When you've already incorporated a sophisticated, multi-capability unit into your system, you surely want it to at least cover all the basics?

The 10 on-board stored Rigs accessible from the front-panel knob are footswitchable as two banks of five, and change fast enough to be used in live performance. A short step on the Rig footswitch allows you to select 1 to 5, with a longer press accessing 6 to 10. Stepping on the Rig switch again allows you to see the status of the effects loop, delay, tap tempo and solo/EQ, but no longer a Rig indication. Bearing in mind that the front-panel knob may be displaying something not current (it will update the footswitch, but not the other way round), and that either a quick or a long press of the Rig footswitch may display nothing if you happen to be set to one of the Rigs in the other bank, I think this is slightly sub-optimal. You might be using the Amp Control feature to select amp channel with your Rig selection, too, making certainty about which Rig you are in even more important. Another row of LEDs on the footswitch wouldn't have gone amiss.

A likely TAE-based live-performance scenario is an on-stage speaker for the player fed from the power amp, while front-of-house gets a speaker–sim feed from the mono line out. Although you have separate level settings for Line and Speaker outputs in the reverb, there are no such independent mixes for the delay — what you dial up for your speaker is also what FOH will get. This means you can't really use the TAE to make a wet-dry-wet stereo rig by setting a completely dry effects mix to the speaker out and connecting a pair of FRFR speakers to the line outs for the 'wet' signal. Well, you can, with just the reverb, but that's not quite the full deal.

The software also doesn't allow you to deploy the IR stage with the power-amp outputs. I guess the assumption is that you will only want to use the power stage with conventional guitar speakers, but with products like Celestion's excellent F12-X200 'Full Range, Live Response' speaker now on the market [see SOS August 2019 review], and the fact that you can get an analogue signal into the TAE pre cab-sim via the effects return, I think that's missing an open goal.

The Sum Of Its Parts

The Boss Waza Craft Tube Amp Expander is capable of some stellar direct recording tones. It shines particularly brightly with 4x12 emulations where, in the real thing, the thump and messy bottom-end resonance works so well to balance out the brittleness of the upper mids. With the right amp, the TAE can do a great version of 'big-cab feel' — the sort that lets you use less distortion and yet somehow sound more powerful. Smaller speaker emulations too are supported by some nice low-end resonance, which you can move up the spectrum with the Resonance Z control, or push away below audibility. Comparing directly to the OX, to my ears, there's always a slightly more lively and resonant bottom end in the TAE that I think lends a degree of playing comfort for people used to the interaction of amps and real speakers. That said, I found I usually had to get rid of a lot of that resonant bottom end from TAE recordings, just as I would with the mic signal from real cabs. If, like me, you tend to filter that stuff at source, seeking to record as 'finished' a sound as you can, its absence from the OX is of no consequence.

Playing live, or 'amp in the room' solo practice is a different matter: there is clearly greater volume-setting flexibility in the TAE's re-amping configuration, and the 'feel' seems to survive the process better at low volume. I find the OX is fine for a couple of notches down on the attenuator, but then I use a Deluxe Reverb most of the time, so there's not too much to attenuate. For bigger amps and any need for much quieter volumes, the TAE offers more control. Compared to the OX's instant gratification provided by the easy GUI, I find the TAE takes a bit more dialling-in. I don't think that is just me finding the software an inefficient and unnecessarily restrictive interface: there really are more ways to make something sound a bit wrong. But when you get everything dead right, it can be really good.

There are plenty of other players in the tube-amp attenuator/speaker-sim market now, but in each of the products, the balance of emphasis seems to lie in a slightly different place, just as it does between the OX and the TAE. Anyone entering the market now should perhaps make a choice based on the balance of their intended live/studio usage. I don't see existing OX users, myself included, deserting a product that they love for all the things it does well, but if you are frustrated by what it doesn't do, the chances are that the TAE has it covered. You might also look at a TAE if you need a unit that can multi-task as the 'controller of everything' in your rig. That said, the more you ask the TAE to do, the more likely you are to come up against one of the things it doesn't do quite so well. It is conceivable that a future software update may be able to address some of the things that I presently perceive as limitations, but right now you'll have to work with what it does.

Adjustable reactance is not a 'magic bullet' that automatically makes everything better. There are combinations of perfectly respectable real amps and speakers that still manage to feel stiff and unresponsive, so perhaps this is not yet an exact science, but being able to tweak the impedance curve certainly does seem to increase your chances of getting a dummy load to 'feel right'. And when the amp is happy, a good IR will take care of the rest. This really is a great time to be a tech-savvy guitar player with an undimmed passion for tube amps. I have no doubt that the Boss Waza Craft Tube Amp Expander stands ready to join Universal Audio's OX as one of the biggest players in this new and expanding market. I don't think it is quite yet the sum of its parts, but some of its parts are very good indeed.

I've referenced the UA OX in this review as the nearest equivalent, and there are a number of things that do bits of the same job, but none that do it all. A Fryette Power Station 2 will get you a real tube amp for re-amping after attenuation, but I think the load is resistive rather than reactive, whilst the new Suhr Reactive Load IR is purported to be the most accurate of all speaker-like loads. And of course, one should never ignore Two Notes, who were pioneers in this field.

The author has created a few audio examples to accompany this review. You can find them on the SOS website at: https://sosm.ag/boss-tae-audio

You can download a ZIP file of hi–res WAV audio examples in the righthand Media sidebar or use the link below.

The Boss Waza Craft Tube Amp Expander is a potential powerhouse of a product — speaker sim, power amp, user-IR host, on-board effects, footswitch and MIDI controllable, and above all a dummy load with variable impedance curve. It can work very well when you get everything set just right, but you will want to use the editor software, and that feels a little undercooked to me. Of course, software is upgradable...