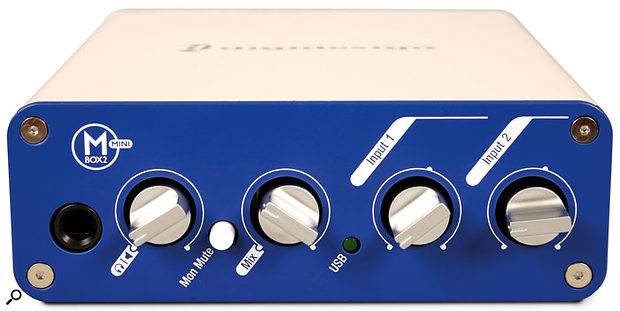 Digidesign have shrunk the M Box to give us the most compact and affordable Pro Tools interface ever.

Pro Tools in your pocket? Well, not quite, but the latest addition to Digidesign's M Box range is by far the smallest yet. If portability, or indeed affordability, is important to you in a Pro Tools system, the M Box 2 Mini could well be perfect for you. In essence a smaller, cut-down version of the standard M Box 2, the Mini has much in common with the larger model. Let's take a look at what has gone and see what has survived Digidesign's shrinking process.

With the smaller unit comes a smaller shipping box, and there isn't room for the usual printed Quickstart guide; instead, there are just two pieces of A4 paper that have been folded into four to fit in the box (this gives you an idea of just how small the M Box 2 Mini is). The first has a few notes on registration, installation and so on, and the second is headed 'Quick Start', but is just labelled 'page one' and refers to pages from what I can only assume is the Quick Start PDF guide on the installation disc, although this isn't made clear.

When I took the M Box 2 Mini out of the box I noticed that it rattled, which is never a good sign. On closer examination I discovered that this was because the printed circuit board at the front of the unit is not anchored to the case, so the knobs and headphone socket are able to move within their holes. This is a bit of a weak point in the design, and it concerns me that at some point in the future it could become a source of unreliability.

Digidesign haven't cut down the software bundle included with the M Box 2 Mini, so you get the full Pro Tools LE software package together with Reason Adapted, Live Lite Digidesign Edition, BFD Lite, Sampletank 2 SE, Amplitude LE, T-Racks EQ, Melodyne Uno Essential, seven Bomb Factory plug-ins and the 39 Digirack plug-ins, as well as the Method One Pro Tools training DVD (you can read my review of this DVD in the Pro Tools column in the October 2006 edition of SOS).

However, with the unit being much smaller (measuring 12.7 x 4.4 x 15.2cm WxHxD) there are inevitably features that haven't survived the cuts to make the M Box 2 into the M Box 2 Mini. These include fixed line-level outputs, and digital and MIDI I/O. There's also only one mic preamp, and there are no input level or overload indicators on the interface.

The front panel of the M Box 2 Mini features:

On the back panel we have:

Having got the M Box 2 Mini out of the box and given it the once-over, I connected it up to my Powerbook G4 to see how it worked and how it sounded. Although the M Box 2 Pro connected via Firewire, Digidesign have reverted to using USB to link the M Box 2 Mini to the host computer. I plugged it in to my Powerbook G4, the USB light lit up on the M Box 2 Mini, I opened a Pro Tools Session and it all played fine straight away. I then tried playing audio in from a portable Minidisc player to check the line and DI inputs. I found that even without the pads the inputs could handle quite high input levels, so there would appear to be plenty of input headroom. 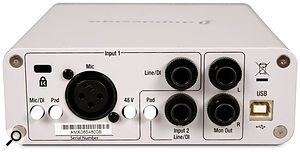 Similar power management problems have been reported with M Box 2 interfaces, and Digidesign released a firmware upgrade (to v1.38) for those models which was designed to correct things. The M Box 2 Mini used for this review reported firmware version 1.40; at the time of writing I couldn't find any reference to v1.40 firmware for the M Box 2 Mini on the Digidesign web site, but it would appear that the power management still needs looking at. It's possible that another firmware upgrade is called for — my personal preference would be to abandon USB 1.1 interfacing altogether in favour of Firewire, but I suspect this would have made the M Box Mini more expensive.

The M Box 2 Mini has the same latency-free monitoring feature as the M Box and M Box 2, in the shape of a 'Mix' control that allows you to blend the input signal and the playback signals in the analogue domain. Alternatively, you can achieve fairly low latency by reducing the H/W buffer size down to 128 samples from the Playback Engine option in the Setup menu. For more details on latency workarounds see the Pro Tools workshop article in the June 2006 issue of SOS.

One issue that Digidesign cover in their single page of printed notes is that some graphical and routing options in the Pro Tools LE software refer to features that the M Box 2 Mini doesn't have. For example, the hardware options in the Setup menu still give you the option to select S/PDIF as a clock source, even though the Mini doesn't have an S/PDIF input. Likewise, the I/O Setup will allow you to select S/PDIF as a signal input. However, Digidesign do say that selecting these features will not have an adverse effect on the system functionality, and I can confirm that my system ran fine whilst the clock source was set to S/PDIF!

The M Box 2 Mini is a very compact, no-frills Pro Tools interface that does enough to enable you to work on the road, in your hotel room, or wherever, though Digidesign appear to have rushed it out a little too quickly, leaving a few details not properly completed. People may complain that it hasn't got this or that feature, but that's the price you pay for a smaller, more affordable interface. I would have valued an SPDIF I/O and a Firewire connection, but other than that, I think Digidesign have got the balance of features versus compactness right.

The M Box 2 Mini offers a sensible reduction of M Box features in a compact and affordable package, without skimping on Pro Tools functionality. However, it does feel in some ways as though the Mini has been slightly rushed in its release, and hopefully some of these problems will be addressed in a future software update.

The M Box 2 Mini offers a sensible reduction of M Box features in a compact and affordable package, without skimping on Pro Tools functionality. However, it does feel in some ways as though the Mini has been slightly rushed in its release, and hopefully some of these problems will be addressed in a future software update.