These affordable active monitors from Fostex provide a tight and punchy sound, despite their compact dimensions.

It's a little-known fact that Fostex are one of the world's largest manufacturers of loudspeaker drive units, most destined for consumer products such as in-car systems. This manufacturing expertise has been applied to their new PM1 active studio monitor, a two-way system featuring a one-inch soft-dome tweeter and a 6.5-inch bass/mid-range driver, powered respectively by 45W and 75W discrete bipolar transistor amplifiers. 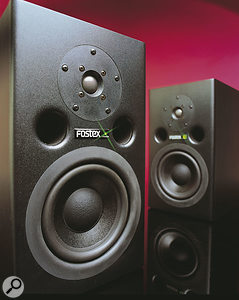 Photo: Mark EwingThe cabinets measure a compact 215 x 380 x 283mm, including the rear-panel heat sink, and two bass reflex ports are fitted through the front baffle. A discrete green LED set into the Fostex badge shows when the power is on.

At 11kg each, these are not excessively heavy for active monitors, but they feel substantial and well built. Unusually, there's very little technical information available on the finer points of the driver design, though outwardly they appear to be fairly conventional and, despite their rather compact size, they have a frequency response stated as 50Hz-20kHz ±2dB, with the LF and HF -10dB points at 38Hz and 23.5kHz respectively.

The crossover type and frequency is not disclosed in the documentation, and there's no frequency-response graph, though we are told that the maximum short-term SPL is 105dB. This is a peak-handling figure, however, and is applicable only to the 80Hz-3kHz range, so I'd imagine a comfortable nominal maximum SPL would be between 85dB and 90dB in practice. While not making these speakers excessively loud, this figure should be more than adequate for sensible nearfield monitoring situations.

Physically, the cosmetics of the cabinet design are very plain, with a slight radius to the baffle sides and no grilles. The drivers are mounted centrally and are recessed flush into the baffle, with a rubber-like trim ring around the bass/mid-range unit. The rear panel houses the IEC mains inlet and power switch, as well as a combi jack/XLR input socket and its associated level control. There are no controls for tweaking the frequency response, if you wanted to adjust for speaker positionings relative to walls, for example.

I set up the PM1s in my studio and tried them with both pre-recorded material and some of the mixes I'd been working on. As predicted, the PM1s went adequately loud and stayed clean and focused all the way up. Their sound can best be described as very tight and punchy, with a nice smooth high end.

I found the mid-range to sound a bit hard next to my (much costlier) Mackie HR824s, and there's not as much bass extension, but you still get a good impression of tonal balance and depth. Crucially, it's easy to separate sounds within a mix, which is something any good studio monitor should be able to do.

There's enough low end for use in most project studio rooms, and the soft-dome tweeters manage to deliver a transparent high end without the aggression that's so often associated with metal-domed tweeters. Stereo imaging is also good, so there should be no problem getting good mixes on these speakers once you've auditioned your favourite record collection and got used to them.

At this UK price, the PM1s are amongst the least expensive active studio monitors on the market, but it would still pay to audition several competing models before making your mind up, as different users look for different characteristics in a monitor speaker. I found the Fostex PM1s to be eminently usable in a mix situation and, though every monitor has a characteristic sound, there's nothing about the PM1s that takes much getting used to. Overall, you'll be rewarded by a tight, detailed sound that makes it easy to evaluate what's going on in your mixes.

As mentioned earlier, the mid-range does have a somewhat unyielding character which wouldn't be my preference for a music listening speaker, but in the context of studio monitoring, it seems to help keep the individual sounds separate, so perhaps it's no bad thing. Whichever way you look at it, if you're in the market for active monitors, but don't want to spend a lot of money, there are few serious contenders, and the PM1 is definitely one of them.

On balance, the PM1 has what it takes to deliver good mixes, while remaining in the entry-level price range for active monitors.