Gefell's reissue of a historic Neumann mic, made in the same factory as the original, exudes class — and has a price to match... 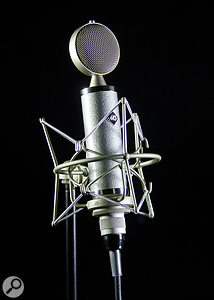 Nostalgia for audio equipment from the 1960s and 1970s has never been stronger, whether it's tape recorders, preamps and compressors, mixing consoles or microphones. The American politician George Ball once said, "Nostalgia is a seductive liar,” and perhaps he had a point! Certainly, the audio engineers of the day were usually very pleased to see the back of their 'old technology' and to welcome the new — which, from their perspectives, offered many important advantages and improvements. However, where there's demand, someone is always going to try to meet it, and nothing stimulates pro-audio nostalgia like vintage Neumann microphones. Indeed, countless boutique manufacturers around the world earn a good living from it!

The Neumann (Gefell) CMV563 modular valve microphone is certainly a 'classic design' that inspires much nostalgia and has formed the basis of several homages over the years. The letters 'CMV' stand for 'Condensator Mikrofon Verstärker', which translates, logically enough, to 'condenser microphone amplifier'. The CMV563 was, essentially, a miniaturised successor to Neumann's famous pre-war, mass-produced capacitor microphone, the CMV3A 'Bottle'. In comparison, the CMV 563 is much smaller than its forebear – it was the original 'baby bottle', measuring 216 x 42mm and weighing just 540g, as opposed to the massive 330 x 90mm bulk of the CMV3A, which weighed over 2kg!

However, the CMV563 is distinguished from its more famous relation by the fact that it was manufactured exclusively at Neumann's Gefell factory long after the war — between 1956 and 1972, in fact. The technology was very similar, though, and it used exactly the same range of original side-fire M7 cardioid, M8 figure-of-eight, and M9 omnidirectional capsules, all separated from the microphone amplifier body by a short pillar 'stalk'. There was also an M55K end-fire omnidirectional capsule design made, which screwed flush onto the top of the amplifier body.

Since the CMV3A's RE084K triode valve had become obsolete, the CMV563 used an EC92 (6AB4) triode, but the overall electronic design was otherwise quite similar. Unfortunately, though, the quality of the output transformer varied quite dramatically between production batches, because the materials were in short supply in the GDR era.

Thing Of The Past

Microtech Gefell's new CMV563 M7S microphone is a faithful reissue of the original design in most respects, although it uses an EF86 pentode valve (wired as a triode) instead of the original EC92, to improve noise performance and dynamic range. The 'S' suffix on the capsule name denotes the use of the shortened, screw-threaded base-attachment format, as opposed to the original M7's taller bayonet fixing arrangement. However, the new microphone is supplied with a bayonet adaptor plate specifically to enable its use with original, vintage, bayonet-mounting M-series capsules (as well as compatible modern capsules from the likes of Blue, Violet and Flea). The new mic can also be used with original threaded M55K capsules.

Appropriately, given the revered nature of this microphone, it ships in a large (470 x 390 x 160mm) and beautiful mahogany-coloured hardwood case. Its hard foam lining has a royal blue velvet surface, with a gold MG logo across the lid, and it cushions an N61 power unit, an EA92 cat's-cradle elastic suspension mount, and a seven-pin Tuchel connection cable (as well as the G/B mounting adaptor plate already mentioned), in three separate compartments. As shipped, a white plastic cap protects the capsule connection contacts at the top of the microphone amplifier, and a warning note advises that this is a screw fit and should not be prised off!

Both the microphone body and the power-supply case have a hammered grey paint finish, while the capsule itself has a satin nickel finish. The power supply is a very simple design with an on-off toggle switch and warning lamp on the front panel, and three connectors on the rear: an IEC mains inlet (with integral 115/230V mains selector and fuse holder), a seven-pin Tuchel connector for the mic, and a three-pin XLR output.

We all know that specifications don't tell the whole story when it comes to perceived sound quality, but for the record, the CMV563's sensitivity is given as 17mV/Pa, the self-noise is 16dBA, and the maximum SPL (for 0.5 percent distortion) is 115dB. Those figures provide a total dynamic range of around 99dB, which is quite low by modern standards. The impedance converter valve operates with an anode voltage of 120V and 1mA of quiescent anode current.

The CMV563 was often described — perhaps unfairly — as a 'poor-man's U47'. Certainly, both microphones used the same M7 capsule design, although the very much larger grille enclosure of the U47 played a significant role in shaping its legendary tonality. It is true that the quality of the output transformer varied, but the underlying characteristics of the microphone shared much with other classic microphones of that era. The current MG reissue, thankfully, features an output transformer built to the original design specifications and made with good-quality laminations and windings.

In terms of sound quality, the CMV563 sounds much as its looks would suggest! It has the characteristically full-bodied, rich tonality associated with a good, large-diaphragm, M7-style capsule partnered with high-voltage valve electronics, but it also has a lovely presence and sheen at the high end. The frequency response has a bit of a 'smile curve' about it, while the extreme high end tails off quite quickly above about 15kHz. There is a gentle 3dB HF peak between about 5 and 8 kHz, and the bottom end is bolstered by the proximity effect — depending on distance, of course. The polar pattern is more of a sub-cardioid shape than a true cardioid, as it completely lacks the expected deep rear null. In practice, it achieves a maximum rear rejection of 10-15 dB across the entire frequency range, and above about 8kHz it becomes quite narrow and figure-of-eight-ish too.

The CMV563 might not, therefore, be the ideal choice of vocal mic if recording the whole band simultaneously in the studio, but the polar response isn't an issue in a booth, or for recording overdubs in a well-controlled acoustic space. Just make sure the talent stays reasonably on axis and behind a decent pop-screen, because when they do the combination of the CMV563 and the M7S capsule is quite sublime and wholly addictive! It lends the recording a very flattering, creamy, smooth and yet still detailed and intimate character, and it worked nicely on two different female vocalists, which I took as a very encouraging sign of its relative neutrality.

This lovely, historic microphone, offering genuine design pedigree combined with modern, high-quality construction comes, unfortunately, at a fairly eye-watering price. It's one of those situations where if you have to ask, you probably can't afford it! To be fair, though, the price reflects the continuing value of genuine good-condition vintage models, as well as competing fairly with modern competitors of similar quality. The re-issued MG CMV563 M7S is undoubtedly a thing of both aural and visual beauty.

At the current UK price, the CMV563 M7S capsule sits amongst the likes of Blue's Bottle mic (a relative of sorts), as well as impressive microphones such as Bock Audio's 507 and Brauner's VMX.

A reissued classic, made to the same design (and in the same factory!) as the historic original. It may seem expensive, but the price is comparable with that of vintage 'clones'.