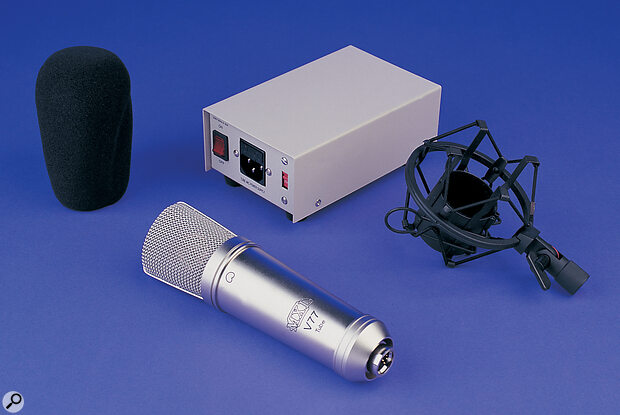 Marshall Electronics have been in business for over 20 years, specialising in the development and manufacture of equipment mainly for professional audio and video applications — their custom engineering department has developed bespoke products for the big American broadcasters, such as CBS and NBC. An increasingly important element of the company's current business, however, is their MXL range of affordable condenser microphones, which have already attracted quite a following. By manufacturing the internals of these microphones in the Far East, to Western specifications, production costs have been reduced, allowing the range to be keenly priced.

The latest addition to the ranks is the new MXL V77S — a valve condenser microphone based around the designs of other microphones in the Marshall range. The single 25mm diaphragm is three microns thick and the pressure‑gradient capsule provides a fixed cardioid polar response. The transformerless output incorporates the familiar 6072 triode valve as the impedance converter and preamplifier.

The microphone measures 55mm in diameter and 195mm in length, with a body which tapers towards the bottom. It weighs 525g and has an anodised silver finish on which the MXL badge and a cardioid symbol are the only identifiers of its frontal axis. A seven‑pin male XLR fitted in the base connects with the power supply unit.

The microphone is supplied in a plastic carrying case which is divided internally to accommodate the power unit, a decent shockmount, 15 feet of connecting cable with seven‑pin XLR connectors, and a foam wind shield. The elastic suspension shockmount is a welcome bonus which elevates significantly the performance of the microphone. A simple spring‑loaded friction grip clasps the microphone's tapered body very securely and the elasticated bands provide a high degree of isolation from mechanical vibrations.

The low mass of the V77S's gold‑sputtered diaphragm allows the microphone to respond well to high‑frequency signals and it is no surprise to see a quoted frequency response stretching between 20Hz and 20kHz. In practice, however, I would estimate that the ‑3dB points are closer to 35Hz and 16kHz. However, this is still a creditable performance for a large‑diaphragm capsule and the response is remarkably flat across the full range. The only audibly obvious exception is a mild 3dB 'bulge' centred around 8kHz, enhancing the clarity and breathiness of voices.

Sticking with the specifications for a moment, the sensitivity of the MXL V77S is given as a healthy 20mV/Pa with an impedance of 250Ω, the Aweighted signal‑to‑noise ratio is specified at 77dB (relative to 1Pa) and the equivalent noise figure is 17dB, again A‑weighted. While there are plenty of much quieter, solid‑state microphones around, the figure achieved by the MXL is not bad for a valve microphone — for the sake of comparison, the far more expensive Neumann M147 large‑diaphragm valve mic is just 3dB quieter at 14dBA. The maximum SPL sustained by the V77S for one percent third harmonic distortion is 122dB, a figure which should be sufficient for most applications.

Like most valve microphones, the V77S must be used with a dedicated remote power supply. In this case, the unit is a compact metal box with an IEC mains inlet and voltage selector switch at one end, and a pair of XLRs at the other. A three‑pin male XLR provides the microphone's output signal while a seven‑pin female XLR connects with the microphone itself via the multicore cable.

It was obvious from the first auditioning that the thin diaphragm employed in this model bestows the V77S with a fast transient response and a wide, open bandwidth. It also has a good bottom end which is full and warm‑sounding without being overly coloured. Being a pressure‑gradient design, the V77S exhibits the expected proximity effect, but it is predictable and progressive, responding well to corrective equalisation, and is capable of being used for creative enhancement of the source.

The polar response has a reasonably well‑defined cardioid shape in the mid‑range, but opens out at the bottom and narrows considerably at the top end — exactly as would be expected of a large‑diaphragm mic. I would suggest that this is a design which gives its best performance when used directly on‑axis and in close proximity to a single acoustic source. The microphone is not unduly noisy when compared with other popular valve mics, and the noise floor is, moreover, pretty benign in character and will not cause problems in normal usage, especially if close miking. I only became aware of its noise floor when attempting to use the mic in a distant setting with a lot of mixer gain wound in.

According to the manufacturer, the V77S was designed to reproduce the character of some of the famous classic mics of the '50s and '60s, and I think it is fair to say it has achieved that goal very well. The combination of the large diaphragm and the 6072 valve afford much of this character.

The sonic qualities of the V77S make it ideally suited to recording vocals — male and female vocals are both portrayed very favourably. There is a distinctly warm, typically thermionic characteristic, as you might expect, but it presents a clear and crisp quality on vocals, conveying a detailed and articulate sound without over‑emphasising any sibilance. However, it also turned‑in very credible performances on a number of other acoustic sources, particularly those which benefited from a little extra warmth and richness. For example, I achieved very good results using the V77S as a spot mic on a solo clarinet, and its warmth and clarity worked especially well with a full‑bodied Lowden six‑string acoustic guitar. As a generalisation, its weak point is with harmonically complex and naturally bright sources, since the resulting sound has a tendency towards brashness. That is not to say good results can't be obtained with a little experimentation, but it wouldn't be my first choice for 12‑string guitars or grand pianos.

Hotting Up The Competition

This is a no‑frills microphone, but one that certainly delivers sonically. When most valve condenser mics are priced well in excess of a thousand pounds, the V77S makes a very attractive alternative, competing strongly in the sector of the market previously dominated by designs such as the AKG SolidTube or the Rode NTV. My only reservations about the V77S are the same as those for any of the current crop of Far East‑sourced microphones. With only one model to audition for this review, I cannot comment on how consistent the sound quality is between supposedly identical models and experience has shown that this can be a problem area. Equally, it is hard to predict the life expectancy of these capsules and it may not be cost effective (or even possible) to have them serviced in five or ten years time. In comparison, if you were investing in a Neumann valve mic (admittedly at rather greater cost) you would expect pairs of mics to sound identical, and that longevity of life and servicing wouldn't be a problem. Perhaps these are not issues of concern for anyone buying the MXL V77S and only time will tell if the level of quality control and serviceability compares with the V77S's more costly competitors. Nevertheless, the MXL V77S has to be taken very seriously, given its price/performance ratio, and it should do very well indeed.

The MXL V77S extends Marshall's impressively‑priced microphone line into the valve condenser territory. A no‑frills, but highly competent design which delivers the sonic goods and performs admirably. Well‑specified and equipped with a good‑quality shockmount and wind shield as standard.