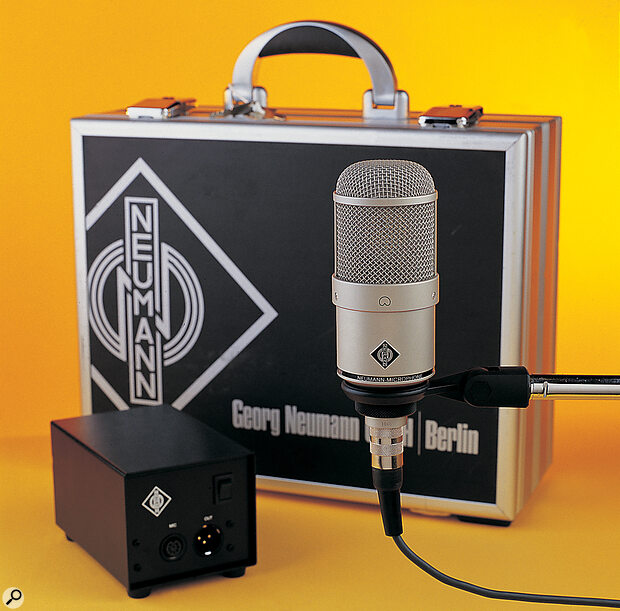 Neumann have rejuvenated one of their most celebrated capsule designs, allowing Hugh Robjohns to bask in that unique glow...

The M147 Tube is a fixed‑cardioid valve microphone which uses the same large dual‑diaphragm capsule design as found in the legendary U47 and M49 microphones — the classic M7. Yet, unlike these traditional valve microphones, the M147's head amplifier uses a hybrid of valve and solid‑state circuitry, in a similar fashion to the company's own TLM103.

The matt‑nickel microphone body measures 57mm in diameter and 142mm in length, with a weight of 460g. The Neumann badge and a cardioid symbol just below the wire‑mesh grille mark the front of the mic. The connecting collar at the base of microphone contains an eight‑way screw‑locking male DIN connector with gold‑plated pins. The collar is also threaded to mate with a supplied stand adapter.

The technical specs of the M147 are every bit as good as we have come to expect from Neumann's high‑end microphones. The output level is pretty standard at 20mV/Pa, but with a rather lower noise floor than might be anticipated for a valve microphone (around 5dB lower, in fact) producing an equivalent SPL of just 14dBA. The valve stage provides the bulk of the signal gain, boosting the capsule output by around 10dB, but is capable of carrying a peak output‑level of +8dBu! The maximum level tolerated by the microphone is 114dBA for 0.5 percent distortion, or 134dBA at 5 percent. The dynamic range is in excess of 100dB — impressive for a valve mic.

The frequency response is substantially linear between 20Hz and 20kHz, although the supplied plot showed a gentle LF droop from +2dB at 4kHz to ‑2dB at 50Hz. There is also a small dip at 7kHz before a 2dB peak at 10kHz. The top end drops off quite quickly above 15kHz, which is typical of large‑diaphragm capsules like this. The response suits voices well, with the right degree of presence for clarity of diction, but without emphasising sibilance.

Behind Every Great Mic...

Like the majority of valve microphones, the M147 is accompanied by a separate power‑supply unit, the N149A. This is a switched‑mode device capable of accepting mains supply voltages between 90 and 250V at either 50 or 60Hz, and generates ±70V for the valve and capsule biasing as well as +32V and +5V supplies. These are all filtered to prevent supply‑rail interference reaching the mic, and are conveyed over a supplied 10‑metre cable with screw‑locking eight‑pin DIN connectors.

A sensor line is incorporated, which prevents the power supply from energising when the microphone is disconnected. This sensor loop also ensures that correct operating voltages are maintained even over long cable runs — the manual suggests that up to 100m of cable can separate the PSU and the mic.

The balanced microphone output is on a conventional three‑pin male XLR at the front of the PSU, and incoming phantom power is tolerated without problems. An illuminated rocker switch enables the power unit output, the internal green LED remaining only dimly lit until the system detects a connected microphone.

Fitting the M147 to its swivel adapter is simple enough, although the mic remains free to rotate and I would have preferred some means to lock the mic in position. The hinged joint to the standmount can be tightened should it ever work loose. Although the microphone seems relatively insensitive to vibration through the stand, better results can be achieved by using the optional EA1 suspension mount. Again, the mic screws into a threaded ring at the base of the inner cradle, which is secured to the outer frame by a network of elastic cords.

The polar pattern is claimed to be a cardioid, but I found that it performed much more like a hypercardioid, particularly in the mid‑ and high‑frequency regions. The frontal pickup area is relatively narrow for a cardioid, with sensitivity falling 3dB at little more than 45 degrees off axis for most frequencies. The bass end was somewhat broader in pattern, as might be expected, tending more towards a dumpy cardioid. Above about 1kHz there was a pronounced rear tail with sensitivity dips at 130 and 230 degrees off axis.

When presented with a 12‑string acoustic guitar, unsurprisingly the M147 did not deliver the most accurate rendition ever heard of this harmonically complex source. It did, however, generate a pleasing, rounded, fulsome sound, which could be very usable in circumstances where clinical accuracy is not the prime concern. That is not meant as a strong criticism — the whole purpose of this microphone is to impose its charming character on all sources, and it does precisely that, very well and attractively, given appropriate circumstances.

The gentle LF roll‑off worked well in combination with the inherent proximity effect when used at a typical working distance. For example, recording spoken and singing voices (both male and female) with the mic distanced by around 18 inches produced a clean, articulate sound. Working closer (at around six inches away) it gave a richer, warmer and more 'ballsy' sound, which worked particularly well with a male narrator. However, although the grille is lined with a finer inner mesh this seems to offer little protection against plosives or wind blasting. Consequently, a decent pop‑screen is a necessity when using the mic for close recording.

This is a really nice microphone. It looks great, sounds fantastic in that typical large‑diaphragm, tube‑amp kind of way, and is just the job for dedicated vocal booths and voice‑over artists. It wouldn't be my first choice for general instrument recording, although it would suit any applications where valve warmth is needed.

The down side is that it is expensive, as most valve mics are, though there are only a handful of practical lower‑cost alternatives. The AKG SolidTube and the Rode NTV are much cheaper, but are not really in the same sonic league, whereas the Rode Classic II and the Audio Technica AT4060 provide a more similar performance but at almost as high a price. However, to my ears the M147 retains an edge over its competitors, and it certainly sounds fully as expensive as it is. In use, there is no doubting its pedigree, and it should certainly come under consideration for any appropriate application.

Three screws around the circumference of the grille section allow its removal, after which the entire capsule and horizontal circuit card assembly can be lifted out. These are mounted on either side of a compliant rubber disk providing a reasonable degree of isolation for the capsule and valve from structure‑borne vibrations reaching the microphone body.

The tiny triode valve appears to be manufactured by Philips, but I was unable to locate any reference to this particular model in my ageing valve data books. It is only about 25mm long and less than 10mm in diameter, and is soldered directly into the double‑sided circuit board. A number of active and passive surface‑mount components litter the upper surface whilst a pair of miniature slide switches cohabit with the valve on the lower surface. These switches are marked to suggest that the sensitivity of the microphone can be reduced by 10dB and a 40Hz high‑pass filter may be introduced. Strangely, neither of these facilities are mentioned in the operating instructions, but disassembling the microphone is not a trivial task (the exposed dual‑diaphragm microphone capsule could easily become damaged) and so I presume these options would be left to the dealer to alter, if necessary.

An old concept combines with new technology to give the best of both worlds — a classic‑sounding valve condenser mic with modern levels of performance.