PreSonus have expanded their AudioBox range with two compact interfaces that will work with your Mac, PC or iOS device.

The AudioBox iOne and iTwo are the most recent additions to the popular line of USB interfaces from PreSonus, sporting a familiar blue paint job and adding iOS compatibility to the specification sheets. The larger of the devices features two simultaneous mic, line and instrument inputs, an input-versus-playback mix control for direct monitoring, plus MIDI I/O. Meanwhile, the iOne has a single mic preamp, one instrument input and is devoid of line inputs or MIDI ports (a simple on/off toggle switch is included for direct monitoring here). Unlike many competing iOS-ready interfaces, no additional cables or adapters need to be purchased to start recording, and the package is augmented by the inclusion of an ‘Artist’ version of the manufacturer’s own Studio One DAW software, plus a handy way of moving work in progress from the iPad to the computer.

The build quality of both boxes is very respectable on the whole. The sturdy aluminium cases have an even-colour finish and chunky, industrial-looking bolts on corners. There are, however, some sharp edges where holes have been cut for the input sockets, and even the edges of the case could be a little smoother to the touch. Unlikely to cause injury perhaps, but this does detract from the overall quality. The buttons feel a little bit ‘hollow’ when pressed, but gain and headphone level pots are more solid, with gentle clicks to assist with setting and matching levels. The chunky main volume dial is pretty sturdy too, and doesn’t wobble about like the knobs of some competing devices. The various controls are laid out sensibly on the front panel, with a signal activity/clipping LED included on each input to act as a simple level meter.

When connected to a computer, the iOne and iTwo are bus powered through the supplied USB cable. For use with an iPad, the interfaces are first connected to a charger using the USB cable (ie. the charger plug supplied with the iPad) and then connected to the iPad using its own 30-pin or Lightning cable. Unusually, the charging icon isn’t shown on the display of the iPad in this configuration, although Presonus maintain that a ‘trickle’ charge will reach the iPad to avoid a drain in power. A support article on the web site suggests that apps running in the background should be manually killed and flight mode selected to avoid battery drain. During testing with a first-generation iPad Mini, the battery did in fact slowly drain when using the Capture Duo app, losing charge more rapidly on more intensive apps such as GarageBand. I consider this not an inconsiderable shortcoming as it renders extended sessions impossible without having to stop recording to recharge. The associated ‘battery range anxiety’ detracts from the would-be relaxed atmosphere of recording on the iPad — very frustrating!

The driver installation package for Windows is reached via a download. On the Mac side, no driver is required as the interfaces are class compliant. However, the hardware does require Mac OS 10.8 or later (despite 10.7.5 being listed as the minimum specification on the packaging). Commendably, PreSonus supply a user-friendly operation manual as an additional download also including tutorials for recording a range of instruments, processing and mixing tips, and even a recipe! Following product registration, the Studio One Artist software is downloaded. The installation packages are rather large: around 3 to 5 GB for the main application with the software instrument soundsets. The download runs into many more gigabytes still when users select options for third-party content (eg. the free version of Native Instruments’ Komplete player).

The Capture Duo app for iPad is available for free from the App Store. It offers an incredibly simple way to record sketches as lossless audio files without the bells and whistles of virtual instruments or loops. You record tracks on the app and then, cleverly, the app sends the project over to Studio One on the computer via the Wi-Fi network. The feature is extremely helpful, considering that alternative apps such as GarageBand fail to offer a method for moving recording projects across to the computer for more detailed editing and mixing. The downside, though, is that the free version is limited to only two tracks; you have to pay £7.99$9.99 to get the full 32-track recorder, so this extra cost needs to be taken into account when purchasing one of the devices.

The entry-level Studio One Artist is an incredibly worthy inclusion, rather than being bundled software you might never use due to limitations. Unlike ‘starter’ packages from some other manufacturers, there is no audio track limit and it has a wide range of useful plug-ins. Notably, these include a surprisingly capable amp simulator with additional stomp-box effects, a passable digital reverb, an impressive range of monitoring utilities, including real-time frequency analysers/phase checking, and a full seven-band equaliser. These features alone make Studio One Artist a very strong contender for audio recording and mixing when compared to its competitors.

The interfaces feature two balanced line outputs and a Kensington security slot. The USB 2 socket connects to either the computer or iPad charger plug via the supplied USB cable, whilst the iPad is connected to the Device port using its own power cable. The iTwo adds MIDI I/O.Added to the capable audio facilities, there is also a multitude of software instrument patches. Among these are some perfectly decent synthesizer, drum and pad sounds that wouldn’t be out of place in a finished production but, as you might expect, sample-based presets such as pianos are only really suitable for demo material. Nevertheless, there’s enough to get you started before wanting to add any additional third-party software instruments. 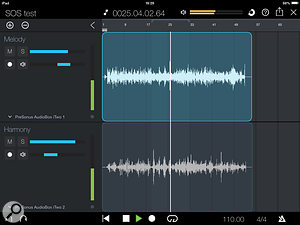 The Duo Capture iPad app. Whilst there are only very basic mixing controls (volume and pan per track), projects can be sent via Wi-Fi to the Studio One DAW software on your computer. A paid upgrade is required to access the full 32-track version.

All the software is straightforward to operate. On the iPad, the Capture Duo app offers simple level and pan controls plus basic editing features, allowing the user to concentrate on recording decent takes, and I found it fairly straightforward to get a project underway in Studio One. The simple approach to direct monitoring works fairly well on both interfaces: a 50/50 mix is fine in almost all applications and helps to avoid any latency that would be experienced when monitoring through software (particularly with iOS). Personally though, I’d prefer to have the option to pan the input signals hard left and right in the monitor mix to help separation, and the headphone amplifier could be a little louder for some applications.

When monitoring real-time effects through the software on the iPad (eg. using an amp simulator in GarageBand) the resulting latency is bearable on all but the fastest of musical passages. In Studio One, virtual instruments can be triggered with no discernible latency; in testing, the interfaces handled low buffer settings without any nasty side effects. 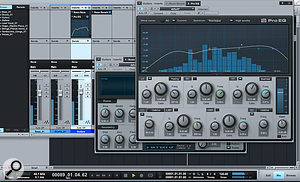 Mixing with Studio One Artist. The entry-level DAW offers a range of capable audio plug-ins including a full seven-band equaliser with real-time spectrum analysis and digital room reverb.In terms of audio quality, I found the iOne and iTwo to be just fine. No obvious noise is apparent on inputs and the preamps are perfectly functional, but you shouldn’t expect miracles in the quality of the converters. I took the time to compare the playback quality of uncompressed audio between interfaces to the on-board sound from my MacBook Pro. At similar listening levels, the iOne and iTwo gave slightly clearer reverb tails on the reference tracks and an very slightly fuller low-frequency response. Whilst these are only very small differences that don’t really ‘wow’ the listener, the interfaces are well up to the task for recording in a home studio.

All in all, the AudioBox iOne and iTwo offer a useful feature set, good sound and build quality and a refreshingly useful software bundle. For the home studio, these are well worth a look, but it’s unfortunate that the iPad integration isn’t quite as refined as it could be. Recommended.

Although it costs more, the Apogee One works with Mac and iOS (but not Windows) and provides up to two simultaneous inputs including a useful internal condenser mic. There’s no MIDI I/O, but direct monitoring is taken care of by an app, which includes the option to vary pan and volume for each input in the monitor mix. The Roland UA22 Duo Capture EX is a closely matched contender to the iTwo in terms of specification, and its solid build quality and respected preamps make this well worth your consideration. However, it does require the Apple Camera Connection Kit to make it work with an iPad, and sample rates are limited to 48kHz. The Alesis iO Hub is an entry-level, two-input audio interface for Windows, Mac and iOS. It too requires the Apple Camera Connection Kit as an additional purchase, and a 9V battery is also required to supply phantom power to condenser mics when used with an iOS device — so I’d say this is more readily suited to those who record using dynamic mics.

Attractive, affordable packages for recording on computer and iPad. Neat iOS integration and useful bundled software are definite plus points, but those requiring higher-quality preamps and more flexible direct monitoring may want to explore other options.