So, overall, despite a couple of personal caveats there really is a lot to like here and I was very impressed by both the MVX150H and its optional BC112-150 cabinet. If I were still gigging in a loud electric band I'd happily take an MVX150 head and BC112-150 cab on stage, because not only does this combination sound great but it's also light in weight, and thus so much easier to lug around than an all-tube 100W head and a 4x12. But it's not all about the convenience; I wouldn't hesitate to use either the amp or the cab if they turned up on a studio session.

So if you have need or lust for a versatile, great-sounding, 150W tube-type amp, which isn't ridiculously priced and doesn't break your back, the MVX150H could very well tick all your boxes. You shouldn't ignore the BC112-150 cab either — that Celestion Redback really is a rather tasty-sounding loudspeaker.

At around the MVX150H's price, you might want to look at the Marshall DSL100HR 100W reverb head for the real deal or the Bias Mini Guitar from Positive Grid if you're into modelling. Hughes and Kettner's Grandmeister 36 head and Vox's own AC30 Custom head are other all-tube possibilities that shouldn't be ignored if you're not running into a 4Ω cab. 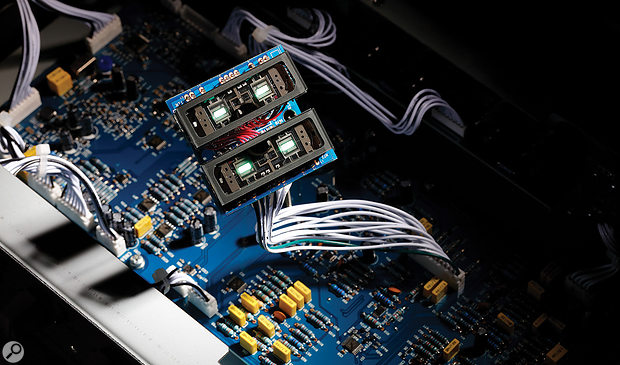 The 6P1 NuTubes that lie at the heart of this amp design may not look like conventional valves, but they do behave in the same way.

Vox are generally regarded as one of the greats of tube-amp design, but a less widely known fact is that they were enthusiastic adopters of transistors in their guitar and bass amps, launching the T60 in 1964, followed in 1966 by the hybrid UL series. The latter featured transistorised preamplifiers and tube-powered output stages across the range, and fuzz circuits in the guitar amps. While Vox continued to produce both solid-state and all-tube amplifiers thereafter, the hybrid concept lay dormant until 2001, when it was resurrected in the Valvetronix range. These amps, which have continued to evolve since then, employ a single 12AX7 as a power stage to drive the input of a solid-state Class-D amplifier, thus boosting the amplifier's output power to a practical level, but use a modelling preamp stage.

The MVX150 builds on the Valvetronix approach, in the sense that it uses both a tube and a Class-D amp in the output stage, but it drops the modelling altogether in favour of a tube preamp. The other notable feature of the MVX150 is that its tubes are not the traditional guitar-amp types, but Vox's miniature 'NuTubes', which gives me the excuse I need to discuss the various efforts that have been made over the years to find direct replacements for vacuum tubes. The only truly successful example has been solid-state replacements for tube rectifiers. Audio tubes (triodes, pentodes and the like) have proved a much more difficult nut to crack — although it has to be said that several companies have had some success in this area.

In 1972, US company Teledyne introduced the Fetron, a device based on high-voltage JFETs. It was developed to provide cost-saving replacements for the 6AK5, 6AM6, 6CB6A, 12AT7, 12AU7 and 12AX7 tubes in telephone exchanges. Fetrons were also sold as part of instrument upgrade kits for oscilloscopes and other types of test equipment. Sadly, the Fetron disappeared into oblivion in the 1990s, as its tube-replacement markets first shrank and then vanished. To the best of my knowledge, Mesa/Boogie are the only manufacturers ever to have used a Fetron in guitar amps, fitting Teledyne's TR1009 as a switchable alternative to a real 12AX7 in the V1 position of the late-model Mark 1 and the Mark IIA and IIB — it was an attempt to avoid the problems arising from microphonic preamp tubes in high-gain situations.

As far as I can discern, only three companies currently produce solid-state, drop-in, fit–and-function replacements for audio tubes. England's Phaedrus Audio have successfully focused their efforts on replacement tubes for classic microphones. US-based Roberts Audio Technology offer the RetroValve and Russia's AMT Electronics the Warm Stone, both of which appear to be direct replacements for the iconic 12AX7 preamp tube, with Roberts also producing 12AT7 and 12AY7 replacements.

Although the JFET is a semi-conductor that can be made to behave like a triode tube (and is, therefore, used quite commonly in electric guitar-related effects pedals and preamplifiers) it can only approximate the performance of a triode. Fortunately, the Vacuum Fluorescent Display (VFD) is a device that has both the structure and the vacuum of a triode tube. Invented and developed in the late 1960s by Noritake Itron in Japan, the VFD retains a niche presence in electronic musical instruments and other appliances (microwaves, car dashboards and audio equipment, for example) that are required to operate in a variety of environmental conditions and light levels. Being a true, directly heated triode, the VFD was seen to have audio potential, and a development collaboration between Korg and Noritake Itron resulted in the 2016 launch of the NuTube 6P1 (http://korgnutube.com/pdf/Nutube_DatasheetV1E.pdf), a miniature, low-power (1.7mW per triode / 5-80 V DC), dual-triode, glass-envelope device, intended for use in audio applications and in musical instrument amplification. However, its low gain (12 as opposed to a 12AX7's 100 ) rules it out as a direct 12AX7 replacement and, to my mind, positions it more as a signal-processing device that can add the characteristic tube harmonic distortion and overtones to audio passing through it. 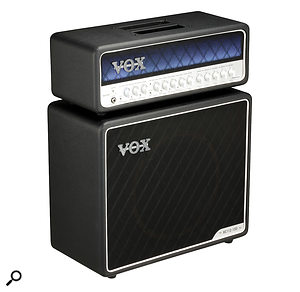 The BC112-150 cabinet, released alongside the MVX150H, is loaded with a Celestion G12H-150 Redback speaker.Sent along with the MVX150H provided for review was its optional matching BC112-150 speaker cabinet, which is an oval-ported, semi-open-back cab, fitted with a 4Ω version of the Celestion G12H-150 Redback (a UK–made loudspeaker). If you're intending to run with two Vox 1x12 cabs, you'll need a pair of the standard 70W 8Ω BC112s instead of the 150W variant, to keep you within the amp's minimum 4Ω loudspeaker impedance requirement. The MVX150H is also available as a combo (the MVX150C1), which is also fitted with a 4Ω Redback. However, if you decide to add an extension cab, the internal Redback is bypassed, begging the question as to why the combo version has only one external loudspeaker jack...

A versatile, good-sounding amplifier with a real tube character from three proper triodes which can deliver pristine clarity, crunch, overdrive and flat-out distortion, plus a glorious bottom–end thump on demand. And its companion cab is rather tasty too!