If your workflow is a casualty of the closure of MobileMe, it's probably time to start looking for alternatives...

With the recent demise of Apple's MobileMe service, now replaced (sort of) by iCloud, Mac users lost a useful file-sharing tool in the form of the iDisk. This was essentially a 'cloud' drive — offering 20GB as standard, but upgradable to larger capacities — and integrated into the Finder so that it behaved like any other hard drive (albeit a rather sluggish one at times). Any time you wanted to share files or folders too big to email, such as DAW projects, uncompressed audio files, CD images and Quicktime movies, you could put them into your iDisk Public folder and send a link to your collaborators and contacts.

As we move into the OS 10.8 Mountain Lion era, any sort of direct replacement for iDisk (from Apple, at least) looks unlikely. But there are other options out there for sending and sharing large files and folders.

Probably the best-known cross-platform 'web disk', Dropbox gives you 2GB storage for free when you sign up at www.dropbox.com. You can increase that to 18GB by evangelising the service and earning sign-up 'referrals' from friends and colleagues. Beyond that, you have to stump up, with $9.99 per month (or $99 a year) buying you 50GB of space. 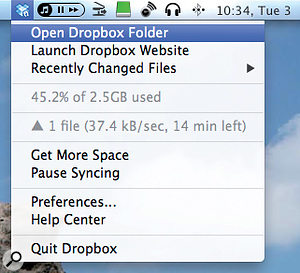 Dropbox integrates into the Mac Finder at least as smoothly as Apple's iDisk did.To use Dropbox in its most intuitive, iDisk-like way, you have to install an application and associated files on your Mac (OS 10.4 or later). Installers are also available for Windows, Linux and various mobile platforms. When that's done, you'll see a new menu-bar item and a 'Dropbox' folder inside your Mac's home folder. To share something (a file or folder), first copy it into this folder. Dropbox syncs it up, in the background, with the cloud storage, and the menu bar item gives you feedback about progress. Then open the Dropbox folder, right-click on the file or folder you want to share, and choose DropBox/Get Link. A browser window opens, from which you can copy the URL web address to send to someone in an email, for example. For uploaded folders, you can also choose Dropbox/Share This Folder. Again, a browser window opens, but pre-configured with a form to send out an email to multiple collaborators.

Very similar in concept and operation to Dropbox is Google Drive. If you already have a Google account, you may well be able to dive right in at drive.google.com, otherwise you can register there as well. The 5GB free storage Google Drive offer beats Dropbox's initial allowance and, while there are no referral size bonuses, an upgrade to 25GB costs only $2.49 a month, and a healthy 100GB is even better value, at $4.99 a month.

Again, the most tightly integrated Mac experience is achieved by installing the Google Drive application (good for OS 10.6 and later), though there's currently no equivalent to Dropbox's Finder contextual menu for quickly generating sharing links and invitations. Instead, you go to Google Drive's menu-bar item (yes, it has one of these as well) and choose 'Visit Google Drive on the web'. You can right-click your files and folders there to share them, and everything works in a very clear and straightforward way.

The way that Dropbox and Google Drive integrate with your Mac — running as applications and keeping a local 'offline' folder sync'ed with the cloud storage — is great… sometimes. It's actually a pain, though, if you want to upload and share large amounts of data but you don't have bags of local hard disk space, as is frequently the case for MacBook owners with solid-state drives, or if you want to upload hours of audio, for example, directly from external hard drives.

To their credit, Dropbox and Google Drive do offer a way to exclude certain folders from local sync, configured via their Preferences. But, in fact, I frequently prefer to disable the local sync'ing shenanigans by just not running the applications at all, and only using these services' web interfaces. Everything is still possible — uploading, managing, sharing and deleting — but without local copies being involved. 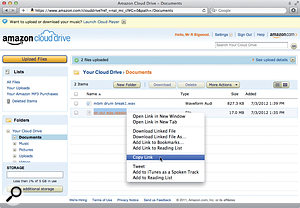 Amazon's Cloud Drive is a less invasive alternative to Dropbox and Google Drive. Here, I'm right-clicking to copy a file-sharing link in its web browser interface.It's for this reason that I'm quite keen on Amazon's web disk service, called Cloud Drive. You get 5GB of free storage, which should be ready to go from www.amazon.com/clouddrive if you already have an Amazon account — and who doesn't? While there is an associated Mac application that you can download, it doesn't do any local sync'ing, and just helps a bit with accessing the web interface quickly, and uploading things from the Finder. The only catch, at present, is that there's a 2GB upload size limit, and the free 5GB can't be upgraded in the UK and most other European countries. It's probably only a matter of time, though…