The different circuit types available in Logic's Compressor are well worth a closer look — but what are they based on, and what do they actually do?

Early versions of Logic Pro's Compressor plug‑in, while commended for its easy‑to‑use and clear interface, acquired something of a reputation for being sonically so‑so. It actually reminded me of some low‑cost hardware units; all the features you'd need, but not exactly the compressor you'd choose to use if you had something with more character available. With the release of Logic Pro 8, the Compressor was significantly upgraded, but as the interface was practically unchanged, many users retained lingering suspicions about its usefulness. These days, Logic Pro's Compressor could be the first that you turn to rather than the last.

The use of compressors has been covered extensively in Sound On Sound in the past, for example, in the article 'Compression Made Easy', September 2009 (/sos/sep09/articles/compressionmadeeasy.htm). Logic Pro's version has all the controls you'd expect to find on a fully featured plug‑in, but there's more to compressors than parameters; they usually impart a 'sound' to any audio passed through them, and some hardware units have a sonic loveliness that is extremely desirable to many, which is why they are in such demand and why companies such as Universal Audio and Waves go to such great lengths to emulate them in software. Hardware compressors utilise specific technologies to control signal levels, and these, along with circuit‑induced distortions, are what the companies are trying to model.

The Circuit Type pull‑down menu is where you'll find Logic Pro's take on these emulations, and you may want to refer to the reference box opposite that outlines the particular characteristics of each type of circuit, along with descriptions of some classic hardware units that feature them.

Logic's Compressor has a Circuit Type pull‑down menu, which is where you can start to explore the different sounds available to you.

In some respects, you could look at these circuit types as sophisticated tone controls (with added distortion), as they all have a subtle, yet audible, effect on the sound. However, if you're trying to specifically emulate classic compressors, you'll have to know a little bit more about how the originals work. A brilliant reference document can be found at Universal Audio's web site, in the shape of the UAD2 manual, but their whole site is a treasure trove of information for those of us interested in classic compressors (www.uaudio.com/media/assetlibrary/u/a/uadmanual.pdf).

Hardware compressors often have operational and electronic quirks, the latter of which are difficult to emulate unless you resort to sophisticated modelling. However, Logic Pro's Compressor will allow you to add the 'flavour' of many classic compressors and, in many cases, the flexibility afforded by the extra parameters will allow you to better fit the compression characteristics to your audio.

The hardware unit is an optical‑based compressor with valve electronics, so if you want to try to emulate it, the first thing to do is to select Opto from the Circuit Type menu. Clicking on the little arrow at the bottom of the Compressor plug‑in window reveals several extra controls. If you choose 'Soft' as the Output distortion type, you can simulate a little of the tube distortion effect of the LA2A, though you may prefer to add it via a dedicated distortion or tube emulation plug‑in inserted on the channel strip before (and, perhaps, after) the Compressor, to emulate input and output distortion.

The LA2A only has a few physical controls, but the 'traditional' compressor parameters are there, albeit often at a fixed or limited range of values, and these are partly what give the hardware device its distinctiveness. The compression ratio is ostensibly fixed at 4:1, but fluctuates depending on the frequency of the incoming signal. To emulate this, you'd want to experiment with the ratio depending on the input signal type, but don't drift too far from 4:1. The LA 2A has a soft‑knee characteristic, so set the Knee parameter to 0.9 or greater. This reduces the rate at which the compression effect kicks in at the threshold point, the control of which is effectively equivalent to the hardware device's Peak Reduction knob.

All Aboard The SSL 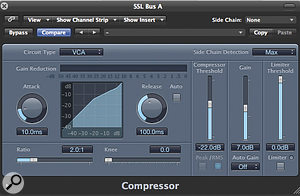 The original SSL Bus compressor had switchable values for Attack, Release and Ratio settings. This functionality is not available in Logic, but you can quickly recall different 'SSL' settings by storing presets with the appropriate values.A large part of the '80's sound, SSL's Bus compressor is a VCA‑based device that is still much sought after and now emulated in software by the likes of SSL themselves, Waves, Universal Audio, and Cytomic, with their 'Glue' plug‑in. One of the characteristics of the SSL is that it has switchable values for Attack, Release and Ratio settings, unlike Logic Pro's Compressor, which has continuous controls for these parameters. The SSL values are as follows:

If you store Logic Pro Compressor Presets with these values, you can quickly recall different 'SSL' settings. The SSL Bus compressor's Auto Release value is dependent on the audio passing through it and, while the Logic Pro Compressor's Auto setting seems to be affected by the low‑frequency content of the audio, it doesn't behave the same as the SSL control, so you'll have to adjust the Release manually to suit.

Gain reduction starts at the selected ratio right at the threshold value on the SSL compressor, so set the Knee on Logic's Compressor to 0.1 to simulate this effect. By using the above combinations of Attack, Release and Ratio and adjusting the Threshold to suit, Logic Pro's Compressor can be used to get some of that famous 'glue' effect on drum buses or whole mixes. Of course, there's nothing stopping you trying out other circuit types or adding some distortion. We can sometimes get too hung up on 'big name' equipment when we're after a specific effect, but moving away from specific emulations might suit your audio better.

A common trick in modern music production is bleeding off a little of a drum mix to an aux, processing it there with distortion and some over‑the‑top compression, then mixing a little of this back with the original. This technique allows you to maintain the clarity of the drums while adding a bit of bite and aggression. Logic Pro's Compressor lets you do this without using auxes.

These are based on the electronics that different compressor types use to perform gain reduction.

FET: Uses Field Effect Transistors. Compressors based on these designs have a 'valvey' sound, but are also capable of pretty fast response times. Examples include the Universal Audio/UREI 1176.

Opto: Uses a lamp and photoresistor. By their nature, optical compressors react quite slowly to transients, which can be a good thing in some cases! Examples include Teletronix's LA2A and the Joe Meek/Ted Fletcher designs.

Platinum: This is Logic Pro's original compressor 'model' and it can still be useful in some situations, as it has a fairly transparent quality.

ClassA_R & ClassA_U: Quite what these emulations are based on is anyone's guess, but the names suggest variable 'mu' devices combined with Class-A amplification, similar to devices from Manley Labs.