The Sampler Control panel is easy to use but still provides plenty of creative sound design options. Here, I’m turning a kick drum sample into a pulse sound.

Groove Agent SE 5 offers all Cubase users a good selection of drum and percussion sounds but sometimes it’s nice to roll your own, particularly if you’d like some alternative percussive sounds such as pulses and tickers — a favourite of film/TV composers but also useful rhythmic ear candy in all sorts of electronic music. Cubase has some cool tools that can be used for this type of task, so let’s explore.

One Slice Or Three?

For this worked example (and the audio clips that accompany it on the SOS website: https://sosm.ag/cubase-0621), we’ll create three types of sound: a deep pulse (heartbeat); a ticker (clock‑like sound); and a short woosh riser. There are plenty of options for sourcing sounds to start with, including hitting some objects around your studio/house but, for the example I simply picked a drum loop with sonic potential. Cubase provides various options for percussive sound design, but for this example I’ll focus on the Sampler Track, whose super‑friendly UI makes life particularly easy.

Create an empty Sampler Track and open the Sampler Control panel in the Lower Zone, and you can drag and drop your drum loop into this panel. Switching the Playback Mode to Slice (new in the Sampler Track for Cubase 11) will, by default, slice your loop based on its obvious transients, then map the slices across the MIDI note range, so you can easily audition each hit to identify the best candidates for sound design.

If you click on a slice you like, it gets highlighted in orange. Ideally, you’d now be able to use the Sampler Control’s Transfer To New Instrument button to send the selected slice to a new instance of the Sampler Track but sadly it isn’t one of the available ‘new instrument’ destinations — hopefully, that’s a feature that Steinberg might add at some stage, but the workaround is easy enough. Having taken careful note of the position of the drum hit within the loop, switch the Playback Mode to Normal, then click and drag to highlight the required part of the loop (select slightly more than the original slice itself; we will tidy up the selection in a minute). Then, on the Sampler Control Toolbar, press Trim Sample (it looks like a pair of square brackets). The rest of the original waveform will disappear so you can focus on your selection. The waveform outside the selection hasn’t been deleted; it is just hidden from view.

To isolate a second slice from our loop, duplicate the first instance of the Sampler Track. Then, on the Toolbar, press Revert To Full Sample. The full loop will reappear and you can isolate a further source. This process can be repeated until you have the required number of sounds and Sampler Tracks.

The new Slice mode is great for auditioning sounds in a drum loop, but it would be even better if you could then send a selected slice to a new Sampler Track instance!

Given our ‘low pulse’, ‘ticker’ and ‘short riser’ targets, I picked as my starting points a kick drum, hi‑hat and a splashy electronic cymbal sound. With each on its own Sampler Track, you can fine‑tune the selection start and end points in waveform displays. Now for the fun part: tweaking these starting points. With sound design, there aren’t really any rules: you just experiment until something sounds good (or weird, or wonderful, the choice is yours!). Still, a few directions naturally suggest themselves with this sort of material...

For the kick drum, I used the Sampler Control panel’s Pitch section to pitch‑shift the sample down one octave, to emphasise the low end. In the Amp Mod section, by adjusting the envelope’s attack stage, you can transition between a harder sound (with more of the initial ‘click’) to a softer one. I went with the latter here, for a more subtle pulse sound. In the Playback Mode section, I also selected Audiowarp’s Solo mode so that I could experiment with the Formant control. This is often used to avoid weird artefacts when pitch‑shifting vocals, but it’s ripe for abuse in sound design and can be great for ‘adding some weird’. In the Filter section, I lowered the low‑pass filter’s cutoff to remove some high end and applied a dollop of Resonance and Drive for extra interest.

The Sampler Control panel’s options may be easy to use, but they can radically alter your underlying sounds.

For the ticker sound, I shifted the pitch of my hi‑hat sample up two octaves. I then used a band‑pass filter and set the cutoff and resonance controls to shape the overall character.

For the short riser, I used the Reverse button on the Sampler Control’s Toolbar to reverse the cymbal sample. I then used the waveform display’s fade‑in option to emphasise the rise in volume of the reversed sound with time, applied some fairly extreme pitch‑shifting (down 3 octaves) in the Pitch section, and added a low‑pass filter in the Filter section. The result was almost like white noise and the Playback mode presents some interesting choices for this kind of sound. In Normal mode, both pitch and playback speed (resulting in longer or shorter rise times) can be controlled by MIDI note pitch. But if you select Audiowarp playback and then the Solo Mode and Tempo Sync options, while you’ll still get changes in the riser pitch with different MIDI notes the time of the riser will remain the same in all cases. Both configurations can be useful — which is best depends on the composition.

The Sampler Control panel’s options may be easy to use, but they can radically alter your underlying sounds. Still, Cubase has plenty of other processing options. The various saturation or distortion plug‑ins are always worth trying but more basic tricks are worth a try too: it’s well worth experimenting with low/high‑cut EQ in the Channel Settings window, to refine the ‘space’ occupied by each of your sounds so they don’t tread on each other’s toes. If your DIY sounds are being used to create a ‘tension’ cue (as in the accompanying audio examples), the addition of some reverb and delay would be in order too; a little dotted 1/8th note delay on a ticker‑style sound can provide some cool rhythmic options.

As things currently stand, you have to create separate MIDI parts for each individual Sampler Track to build a complete performance and, personally, I prefer to program parts for these sorts of percussion sounds on a single track. This makes for easier MIDI editing or use of MIDI plug‑ins such as Beat Designer or Step Designer to create pattern‑based performances combining all the sounds. If your Sampler Track sound design ‘kit’ consists of up to four sounds, there’s a neat solution to this, in the form of MIDI Sends. 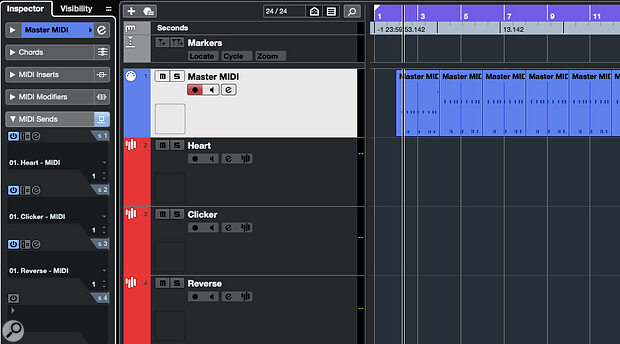 Using MIDI Sends on a ‘master’ MIDI track allows you to create and edit your MIDI performance more easily while still sending the MIDI data to multiple Sampler Tracks.

First, create an empty MIDI track that’s not associated with any virtual instrument. This will be your ‘master’ MIDI track. In its Inspector panel open the MIDI Sends panel. Once you activate a send slot, you can click on the MIDI output field and specify where the MIDI data will be sent… including any Sampler Track! If you leave the respective Effects fields empty, all MIDI data on this ‘master’ MIDI track will be passed to the MIDI output field destination unaltered.

Then, for each Sampler Track, use the mini keyboard display at the base of the Sampler Control panel to specify a MIDI note range that each track will respond to. I specified C2‑B2 for my low pulse sound, C3‑B3 for my ticker and C4‑C7 for my short rise sound. The ‘master’ MIDI track can then be used to record and edit the MIDI performance for all three sounds, much as you would with a VSTi drum kit but with the convenience of the super‑easy sample/sound design offered by separate Sampler Tracks.

One I Made Earlier

There is one more step that’s optional but also very useful. If you select both your master MIDI track and all the associated Sampler Tracks, and then right‑click, you can choose ‘Save Track Preset’ from the pop‑up menu. This creates a multitrack‑based Track Preset that you’ll be able to recall in any future project. Once you have recalled it, your master MIDI track and all the Sampler Tracks will reappear in your new project, with all the samples and sound design settings intact. Just remember to check that the audio output routing for the Sampler Tracks is suitable for the new project and you can start work on your next cue.