Making Electronic Music Without A Computer By Rory Dow 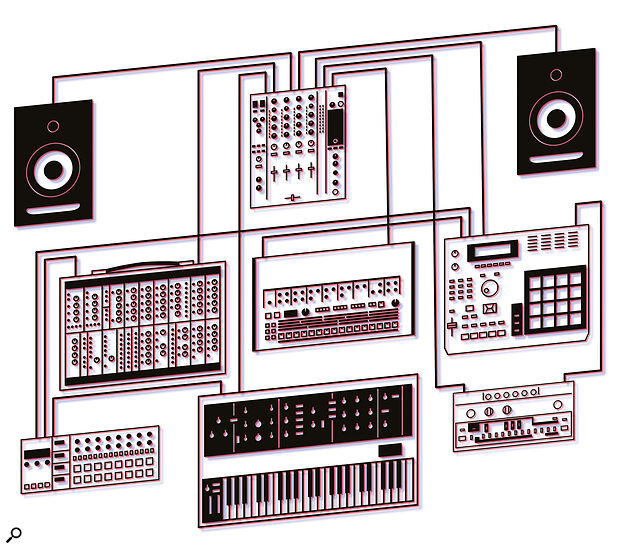 We look at the history, the theory and the practice of making electronic music without a computer.

If you’ve been on the internet in the last 10 years, you’ve probably stumbled across the phrase ‘DAWless jamming’. It’s a mildly clumsy expression for making electronic music without a computer. For older readers, this won’t seem like a new thing, but for anyone brought up in the age of computers, the DAW is the obvious first step in an electronic musician’s journey. But what happens after that?

The focus of DAWless jamming tends to be on solo performances where pre‑programmed drum machines and sequencers provide a framework around which experimentation and fluidity are still possible, both in the sound and arrangement. A DAWless jam can provide anything from the structure for a new song to a six‑hour live set in the club. The machines are the orchestra and the performer is the conductor.

Where Did It All Start?

Whilst the first instrument to use electricity as a sound source dates back as far as 1876 (Elisha Gray’s Musical Telegraph), the first popular electronic instrument was the Theremin, designed and built by Léon Theremin in 1920. Whilst these instruments paved the way for electronic music, it wasn’t until the invention of the drum machine — the Rhythmicon in 1930, again by Léon Theremin — that the idea of using machines to generate real‑time musical performances really took off.

It would take another 40 years before the use of drum machines began to infiltrate popular music in any significant way. Sly & the Family Stone’s ‘Family Affair’ was the first number‑one pop single to feature a drum machine (the Maestro Rhythm King MRK‑2) in 1971. Even then, it wasn’t until the 1980s that the drum machine, synthesizer and sequencer took a proper hold over popular music.

Built in 1948, Raymond Scott’s Electronium was a beautiful and innovative modular synthesizer which housed an ‘automatic composition machine’ which would allow the user to develop musical phrases. This could be considered the first synthesizer/sequencer combo. It would take Buchla and Moog another decade to arrive at much the same point. In 1964, the Buchla 100 synthesizer contained the first commercially available sequencer with the Moog Modular sequencer module arriving a few years later.

After this, sequenced music began to filter into the mainstream. Artists like Tangerine Dream and Klaus Schultz embraced the sequencer in the early 1970s. Donna Summer’s ‘I Feel Love’ exploded into the number‑one spot in 1977, and although it used sequencers they were painstakingly multitracked. The Moog modular, the song’s primary instrument, consistently went out of tune and had to be retuned mid‑take. At this point, in the late 1970s, sequencers and synthesizers were still too expensive for anyone but the very rich and successful. It was cutting‑edge technology which often cost the equivalent of a house or a car.

It was during this period that the first seedlings of electronic jamming began to sprout — specifically the idea that multiple machines could run in synchronisation. In the analogue domain, modular synthesizers working with CV and gate signals could accept an analogue clock to synchronise their sequencers. A drum machine is essentially a complicated clock, and so even without a dedicated clock output, a drum machine can still be used to synchronise a sequencer. Musicians in Germany during the late ’60s and early ’70s were the first real pioneers of these techniques. ‘Kosmische musik’ (or Krautrock as the British press contemptuously labelled them) made great use of sequenced elements in their music and laid down the foundations for ambient and techno music in later decades. 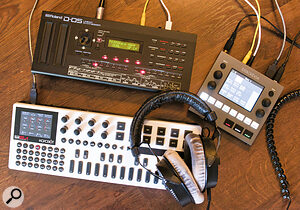