This August represents the tenth anniversary of Apple shipping the original iMac, so we take the opportunity to sit back and reminisce on how Mac technology has changed for musicians over the last decade.

One hundred and 20 months. 3653 days. 87,672 hours. 5,260,320... Well, you get the idea. No matter how you look at it, 10 years is quite a long time — and in terms of music technology, it seems even longer. Ten years ago our Macs were beige boxes, the G3 processor was an object of desire, Emagic, Steinberg and Opcode were still independent companies, and musicians made music with applications like Logic Audio Platinum 3.5, Cubase VST/24 4.0 and Pro Tools|24. If you couldn't afford Digidesign's audio hardware, you'd have been making the most of your Mac's inbuilt audio ports, and the lucky ones might have been using something like a Korg 1212I/O card. It really is astonishing to consider how technology changes.

It's also astonishing to consider how companies change. Ten years ago Apple was considered anything but a success; and despite the return of Steve Jobs the previous year, few could have (or, indeed, would have) predicted the rejuvenation of the company's iconic brand, which has seen Apple become both relevant and desirable for a whole new generation of consumers and musicians.

But perhaps the most interesting thing is that it was 10 years ago when two of the seeds for Apple's current success were planted: firstly, the purchase of the in-development Final Cut video-editing software from Macromedia, and secondly, the release of the iMac, which began shipping almost 10 years ago to the day from when this article will be published: August 15th 1998.

At the introduction of the iMac, a few months before the product shipped, Steve Jobs said that it came from "the marriage of the excitement of the Internet with the simplicity of the Macintosh." And although the iMac was indeed the computer aimed at both the consumer and education markets that would make it easy for people to get online, the then-interim CEO said the letter 'i' meant more to Apple than just the Internet, showing a slide that presented four other words: individual, instruct, inform and inspire. 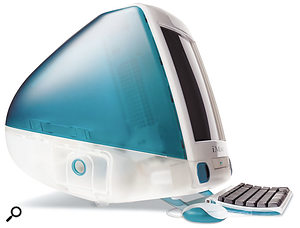 The original Bondi-blue G3 iMac began shipping 10 years ago this month. Aside from the CRT display, it still looks surprisingly modern and distinctive.Giving such meaning to a single letter was a technique that had been employed at Jobs' previous company, NeXT, where the lower-case 'e' in the company's logo had been suggested by the legendary American designer Paul Rand. In designing the logo for Jobs, Rand deduced that a lowercase 'e' would both provide visual contrast and also stand for education, excellence, expertise, exceptional, excitement and e=mc2. Whether or not Apple's 'i' was inspired by Rand's earlier thinking, it's interesting how this prefix has lasted for 10 years, even though many people who purchase Apple products today may not give a thought as to what the letter 'i' in their device's name might actually mean. One could argue that the reason such a branding idea has stuck is because it actually had substance — an ideal championed by Rand in terms of design — as opposed to being a simple gimmick. But the substance of the i-branding has stayed relevant, and the use of the 'i' is as appropriate today for the iPhone as it was 10 years ago for the iMac.

In addition to a distinctive name, the iMac also had a distinctive design, with the computer and display encased in a translucent Bondi-blue plastic shell. At the time, Jobs said that the iMac "looks like it's from another planet — and a good planet. A planet with better designers." And it's interesting to remember the influence the iMac's design had on other products; for a time it seemed like every manufacturer wanted to tap into the zeitgeist of the iMac by substituting opaque plastics for something more colourful and translucent. Remember the translucent printers, Zip drives and even domestic household goods? It suddenly seems so long ago.

The original iMac shipped with a 233MHz G3 processor featuring a 512k Level-2 cache, and the fact that it offered a cache was actually a big deal, since Intel's Celeron processor (used in lower-cost Windows computers at the time) initially had no Level-2 cache, in order to reduce the chip's cost. The iMac also had a 4GB hard drive, a 24-speed CD-ROM drive, and 32MB of memory; and while these specifications seem ludicrous by today's standards — arguably they weren't even optimal for running demanding software at the time either — they were just about adequate to run music software of the day.

Despite the iMac's aesthetic appeal, there were two aspects of its specifications that shocked both existing and prospective Mac users: firstly, there was no floppy disk drive; and secondly, the iMac eschewed the standard ADB (Apple Desktop Bus) and RS422 serial ports in favour of two USB ports, making Apple the first company to ship a USB-only computer without any legacy connectivity.

Many publications cited the lack of a floppy drive as the reason the iMac would fail, and while it was inconvenient for some users — especially those running music software that relied on a floppy drive as a means to authorise their Mac to run software such as Cubase and certain plug-ins — most people were eager to ditch their floppy disks in favour of newer, higher-capacity storage technologies that were becoming more affordable, such as CD-R. Other companies soon released USB floppy drives to fill the void, while developers removed floppy dependencies from their products.

The lack of ADB and serial ports was also inconvenient for Mac musicians at the time. While the ADB port was mostly used to connect the keyboard and mouse to your Mac, it was also used for connecting copy-protection devices, such as Emagic's pre-XSKey dongle for Logic, and PACE's pre-iLok device (the iMac would even inspire the name for a copy protection device), which was employed by companies like Waves.

With no serial ports, there was also no way to connect existing MIDI interfaces to the iMac, and although various serial-USB adapters became popular, companies soon began to release not just MIDI interfaces with a USB port, but audio interfaces as well. While Opcode are mostly remembered for their software — notably OMS, the system used by a large number of Mac users for working with multi-port MIDI interfaces, and Vision, the popular audio and MIDI sequencer — they were also one of the first companies to produce a line of MIDI and audio interfaces for the iMac. 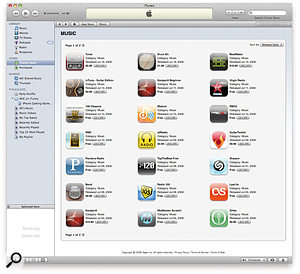 Ten years later, the iMac of today is quite different when compared to the original model. For one thing, it has an Intel processor, which would have been inconceivable in 1998 — a time when Apple were showing TV commercials featuring a snail carrying a Pentium II processor on its back. But with the latest range of models adopting a sleek aluminium and glass design, and offering tremendous performance to the end user, the iMac is now seen as a device, both functionally and aesthetically, that sits comfortably and blurs the edges between the professional and consumer markets.

Another big difference with the iMac of today is that the original iMac initially shipped with Mac OS 8.1, while just 10 years later we have the sixth major version of OS X, an operating system that seemed almost like it might never arrive in 1998. Although musicians were slow to adopt OS X, few would be able to cope with what would now be seen as a highly primitive system.

For example, when you consider how easy it is to work with MIDI interfaces these days in OS X, thanks to Core MIDI — and remember the joy of setting up OMS and trying to get it to work with non-Opcode applications like Cubase and Logic — it's hard to remember why the transition took so long. In many cases, a new MIDI device can now be connected while your sequencer is running, and the fact that Core MIDI can simply tell the application of a change in your Mac's MIDI hardware, so the application is able to automatically accommodate the change, would have seemed like black magic in the days of the classic Mac OS.

On the subject of software, when Apple acquired technology from Macromedia in 1998, they didn't mention that Final Cut was even the technology in question, stating that the motivation for the acquisition was "to enhance future versions of its widely used QuickTime software." As we now know, Final Cut was the first of many purchases, beginning in the same year as the iMac was released, that saw Apple assemble an incredible arsenal of professional applications for media creation. However, Apple didn't just use their high-end technology to only supply software for professionals. Since the early days of Apple, Jobs has seen personal computers as tools that can empower the world, and in the year following the Final Cut acquisition, in 1999, the company released not just Final Cut Pro, but iMovie, the easy-to-use consumer version of the same technology, enabling anyone to create polished video productions.

Looking back now, it's quite incredible to consider the progress that has been made since 1998, particularly if you consider the software instrument revolution. And if you'd looked back 10 years in 1998 to 1988, you probably would have reached the same conclusion for that period of time. In 1988, musicians were just starting to embrace computer-based sequencing and notation systems, and this happens to be the same year that the first version of Finale was released for the Mac. So given the improvements we've seen in these last two decades, I can only look forward to what we'll be looking back on in 2018.