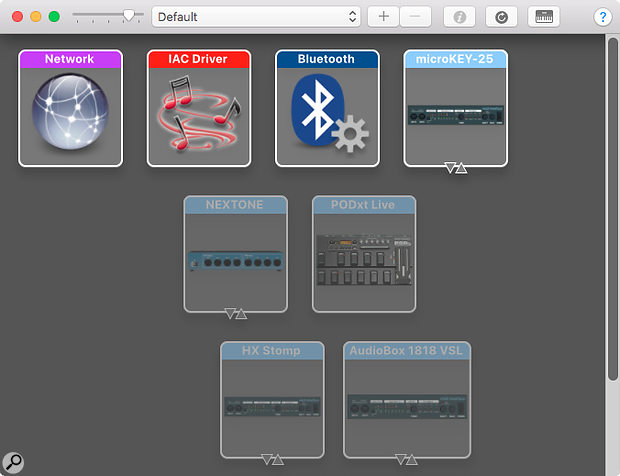 Screen 1: The IAC Driver is key to routing MIDI from one Logic track to another.

Logic's MIDI plug-ins are great, but getting access to the data they output can be tricky. Here's how it's done.

Those MIDI plug-ins that pop up in green in Logic's Instrument Channel FX slots can be very useful in creating something impressive from a modest input — the Arpeggiator and the Chord Trigger, for example, which produce complex results based on you playing or programming in just one or two notes. However, one major frustration is that these plug-ins don't facilitate the simple recording of their outputs, so although the audio results might sound impressive, your MIDI track still contains only the trigger notes that you played before they reached the MIDI plug-in. This is extremely annoying, as the Chord Trigger in particular is a great tool for knocking out a first draft of string parts, but in most cases you'll then need to thin out the notes, tie some across bar lines and so on to get the results sounding authentic. I'm sure the Apple guys could have built in this useful facility, but don't despair, as there are a couple of ways to do it.

After some searching around I discovered that there is a fairly straightforward way to record the processed MIDI data without having to use any third-party hacks or apps, and though it isn't as straightforward as a 'Make it so' button, it doesn't take long and once you've done it a couple of times you'll be able to do it very quickly.

One major frustration is that these plug-ins don't facilitate the simple recording of their outputs, so although the audio results might sound impressive, your MIDI track still contains only the trigger notes that you played before they reached the MIDI plug-in. 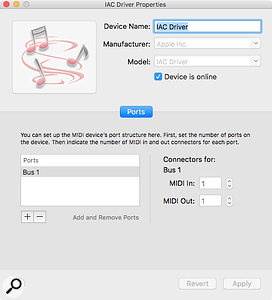 Screen 2: Before you can capture the output of your MIDI plug-ins, the IAC Driver needs to be set to 'online'.The secret tool that makes this all possible resides on the MIDI page of your Audio MIDI Setup utility, which can be found lurking in the Applications / Utilities folder. Here you'll see icons for your various MIDI devices, but there's also one labelled IAC Driver (see Screen 1 above), and unless you've visited it before, its icon will probably be dull, signifying that it isn't active. Click to turn it on, then double–click to open its properties, where you need to check the 'online' box (Screen 2). You can leave this set up for next time you need it. The IAC Driver is involved in internal MIDI routing and can be a powerful ally in working around some of Logic's limitations.

With the IAC Driver active and online, we're set to start the process. First, instantiate a MIDI plug-in such as Arpeggiator or Chord Trigger on the desired instrument track, pick a suitable instrument and then record something. As outlined before, only your trigger notes will be recorded but you'll hear the result of the MIDI effects in their full splendour. Once you're happy with the result and have finished sorting out note lengths, timing and so on, use Logic's Duplicate Track function (the 'other' + sign box to the right of the one you usually use to create new tracks) to open a new instrument track with identical settings. 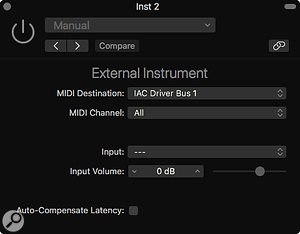 Screen 3: The track that is to receive the desired note data must have its MIDI Destination set to IAC Driver Bus 1.Next, use the instrument select box on the original track containing your trigger notes and choose Utility / External Instrument in place of the original instrument. The Info window should show MIDI Destination as IAC Driver Bus 1 but if not, go in and set it in the menu (Screen 3). Now remove the MIDI processing plug-in (Arpeggiator, Chord Trigger etc) on your duplicated track, and set it to record from the start of the region above containing your trigger notes. The processed data from your original trigger track will now be recorded into your new track. Once done, disable the External Instrument plug-in to avoid more processed MIDI data being recorded when you don't expect it.

It's that simple, and now you can go in and edit the MIDI data in the usual way.

While I've pointed out the shortcomings of Logic not having a built-in means to send the output of MIDI effects to plug–ins not in the same Instrument channel strip, it is actually possible if you're prepared to step into geek world, but unless they know you there, it can get a bit tricky. Essentially, you use the Mac's IAC Driver to take specific MIDI data from the MIDI plug-in and make it available as a global controller for any plug-in that wants to use it. This involves a fair bit of knitting in Logic's dreaded Environment page in order to route the MIDI control data to the required destination, but it can be done if you are prepared to persevere with it. 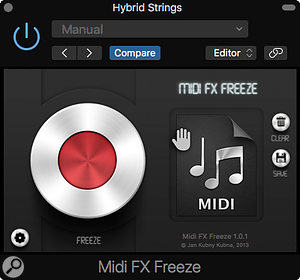 Screen 4: The free MIDI FX Freeze plug-in.If you prefer the third-party route, the freeware MIDI FX Freeze plug-in from www.audiocr.com will also allow you to capture the output of your MIDI plug-ins — though it does so in a slightly different way, by generating a separate MIDI file that you must then re‑import into Logic.