The New Tracks dialogue can be persuaded to create multiple tracks of different types in one go, without needing the mouse

There are many ways to set up Pro Tools tracks, and not all of them are created equal!

One of the fascinating things about DAW software is that there are often many ways to achieve a particular result. This could also be seen as a frustration, though, and it probably means that some of us get into the habit of doing things in ways that are not as efficient as they might be. A classic example in Pro Tools is the creation of tracks within a Session. This can be carried out manually in several ways, while tracks also get created automatically when media or Session data is imported.

Ring In The New

A natural place to start is the New Tracks dialogue, accessed from the Track menu or using the shortcut Command+Shift+N (Ctrl+Shift+N on Windows). Many people revisit this dialogue repeatedly to create a single track type at a time, reopening it each time a different track type is created. This is not necessary, and as creating tracks is something you are going to do in every Session you create, it's probably worth learning to navigate it without using the mouse. To populate your session with all the tracks needed in a single operation, use the following shortcuts (Windows users should substitute Ctrl for Command):

Familiarity with this family of shortcuts makes track creation extremely fast, and Track Presets — which we'll discuss later — can also be accessed from the Track Type menu. For those of us still using Diginet-based control surfaces such as the D-Control and D-Command, the same shortcuts translate directly onto these surfaces too, and although the current Eucon-based surfaces offer direct access to Pro Tools functions thanks to their deep integration with the software, the convention as laid out in the New Tracks dialogue is still there. The most accessible entry point into Eucon is the excellent PT|Control app on iOS. If you are an iPad user and you haven't yet checked it out I strongly recommend it, particularly if your pockets aren't deep enough for an S6! In the Soft Keys section on page 136 (accessible directly from page 1) we find the familiar parameters from the New Tracks dialogue, which is automatically opened when accessing this page.

If you are in a real hurry, or are creating additional tracks mid-Session, you can also take advantage of a family of track-creation operations based around double-clicking with the mouse. Since Pro Tools 11, double-clicking on empty space in either the Edit or Mix windows will create a new track of the same type and width as the last new track created in the Session. Adding Command (or Ctrl on a PC) will create an audio track, adding Ctrl (Windows: Start) will create an auxiliary track, Shift creates a master track and Alt creates an instrument track.

All of these double-click shortcuts follow the channel format (mono, stereo and so on) of the previously created track. If there's no precursor to follow, the new track will default to stereo. There isn't a modifier to choose mono or stereo.

When importing audio or MIDI into Sessions, you have the choice to import it either to the Clips List or to new tracks, which are automatically created on the timeline. This choice applies both to clips imported using the import dialogue and anything dragged and dropped from Finder/Exporer or from a Workspace browser. I mention this because many people overlook the option of importing to the Clips List when importing media. Going straight to the timeline might seem like the obvious choice, because that's where you ultimately want the clips to end up; however, going via the Clips List lets you add them to the timeline in stages, and with additional options, courtesy of the last item on the Clips List drop-down menu, accessed from the round button with the downward-facing disclosure triangle. Timeline Drop Order allows the user to change what happens when dragging multiple clips from the Clips List to the timeline. The default is top to bottom, meaning each clip starts from the same time and new tracks are created for every new clip. Left to right imports the clips one after another along the timeline on a single track.

Importing audio via the Clip List gives you this additional option as to how it should be placed on the timeline.When it comes to automatically creating multiple tracks in a single operation, the long-standing solution has been to use Import Session Data to pull them in from another Session. However, if you regularly need the same tracks set up as a starting point, templates offer an easy alternative. Pro Tools installs several factory templates, identified by their PTXT file extension, and creating a custom template is as easy as choosing 'Save as Template' from the File menu.

Pro Tools 2018.1 officially introduced yet another alternative: Track Presets. This is a feature that parts of the Pro Tools community had lobbied for for years, wanting a way to recall chains of plug-ins to individual tracks in a similar way to Logic Pro's Channel Strip Settings. However, when it eventually arrived, Avid did far more than create a plug-in librarian. Track Presets allow the saving of not just chains of plug-ins but also media, on tracks and groups of tracks. For instance, you could save a drum tracking Track Preset containing multiple audio and auxiliary tracks, plug-ins and routing. It's a very powerful and very complete solution, which is definitely worth exploring. 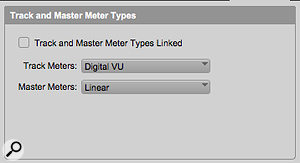 You can choose a separate meter type for Master Faders. 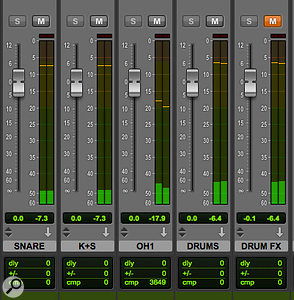 Fat meters: one of few options for customising the look of the Mix window.