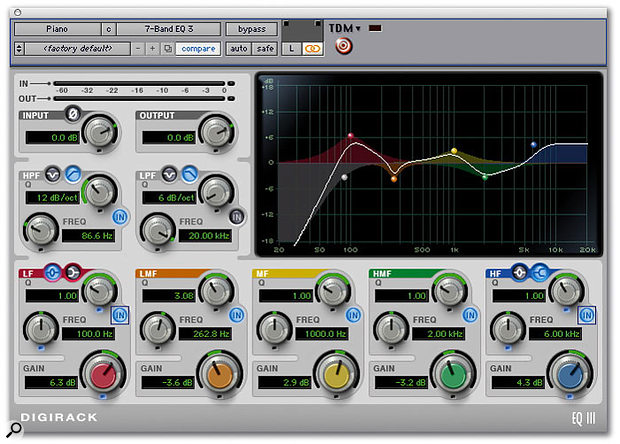 This month sees a high-quality, free EQ plug-in gracing the Digirack suite, some intriguing options for collaboration via the Internet, and a host of updates.

There's plenty of news from Digidesign this month, including major launches such as Pro Tools M-Powered and Pro Tools 6.9, which was released just as we went to press. There'll be more on v6.9 next month, while M-Powered is covered in depth elsewhere in this issue, but there's no shortage of smaller items to tell you about in Pro Tools Notes.

First up, Digi have released a new free plug-in: EQ III (shown above) is a 48-bit EQ plug-in available for Pro Tools and Avid systems. The latest addition to the Digirack suite of plug-ins, EQ III supports TDM, RTAS, and Audiosuite formats, and is available in one-, four- and seven-band configurations. As well as conventional parametric bands, EQ III includes selectable shelving filters and settings plus separate high-pass, low-pass, and variable-Q notch filters. However, be aware that EQ III operates as a mono or multi-mono plug-in only, with stereo and multi-channel tracks supported through multi-mono operation.

EQ III works on all Pro Tools HD and Pro Tools LE systems running Pro Tools 6.7 and higher on Mac OS X and Windows XP, as well as Avid Xpress, Avid Xpress DV and Avid DNA systems. Although it hasn't been tested by Digidesign on Mix systems running v6.4, users have reported it works successfully provided you have at least v6.4.1cs3 of Pro Tools installed. However, on Mix hardware it will only be available as an RTAS and Audiosuite plug-in, as the TDM version has been written specifically for HD/Accel cards.

Two further words of warning regarding EQ III: first, do not attempt to install it on a system running Pro Tools v6.2.x or lower. If you do, you will have to delete some files by hand and then re-install Pro Tools from scratch! Second, there is no compatibility between EQ II and EQ III. EQ III is 'in addition to' EQ II not 'instead of', so you will still need EQ II to open any of your previous sessions that use EQ II.

As will be apparent from the screenshot, the user interface is a vast improvement over EQ II, with nice knobs and a graphical display similar to that of the Waves EQ plug-ins. The reports on EQ III are already very complimentary, with lots of people preferring it to the Waves Q series and some even rating it more highly than the Waves Renaissance EQ; others are comparing it to the Sony and McDSP EQs, which for a free plug-in is praise indeed. Digidesign are already talking about an update with some user interface improvements, and there is unconfirmed speculation that they might bring out a new compressor, which in my opinion would be a long-overdue improvement.

This month also sees two announcements that will be of interest to users seeking to collaborate and work across the Internet. Source-Connect is a Pro Tools plug-in that uses the 'voice over IP' technology that makes it possible to make phone calls via the Internet, enabling you to make audio connections between Pro Tools systems anywhere in the world.

Source-Connect enables direct-to-timeline recording of real-time, broadcast-quality audio with an AAC codec and requires a T1, cable or DSL Internet connection of at least 300kbps bandwidth. It is cross-platform, so Macs can connect with PCs and vice versa. Source-Connect works with Pro Tools TDM or LE version 6.4 or later; you will also need an iLok and a minimum 2GHz PC running Windows XP or minimum 1GHz G4 Apple Mac running OS X.

Digidesign have updated their Digidelivery server software to version 2.0. This update enables Server-to-Server Relay, adds the sender's user name to the deliveries list, and fixes a bug with work order entries, along with other minor fixes and improvements, and all Digidelivery administrators should update to this version. Digidelivery is the first module of Digidesign's collaborative system, which is based around two Ethernet network units and allows you to exchange any kind of file of virtually any size with anyone in the world. Pro Tools media files can be automatically included with the Session file, and the system has 128-bit encryption security and lossless compression for speed and reliability.

The plug-in formally known as Finalis (see last month's Notes) has changed its name to Finis and has been updated to v1.0.1, with a few small bug fixes. It's available from Elemental Audio (www.elementalaudio.com).

Digidesign have updated their Revibe TDM plug-in to v1.1cs1, fixing a problem with certain Revibe reverb types where Ls and Rs channels of a surround mix were not properly fed to the reverb algorithm.

Meanwhile, Audio Ease (www.audioease.com) have updated their Altiverb convolution reverb plug-in to version 5. You can now choose either iLok or challenge-and-response copy protection, while there's a new positioning control and four-band EQ, internal level meters, input and output controls for front, rear, centre bleed and LFE channels, separate gain and delay controls for the Direct, Early Ref and Tail sections, a CPU load control and a Reverse reverb mode. Internal test samples can now be triggered from the Mac's keyboard, preset switching is automatable, and there's three-band damping. Also included in this new release are presets ranging from the Amsterdam Concertgebouw to the back of a Ford Transit van!

Antares have announced the release of their Auto-Tune TDM Production Suite for Mac OS X. It includes the TDM versions of Auto-Tune 4, which corrects intonation problems in vocals or solo instruments in real time, and Microphone Modeler, which is designed to impose the characteristics of one microphone on material recorded with another. 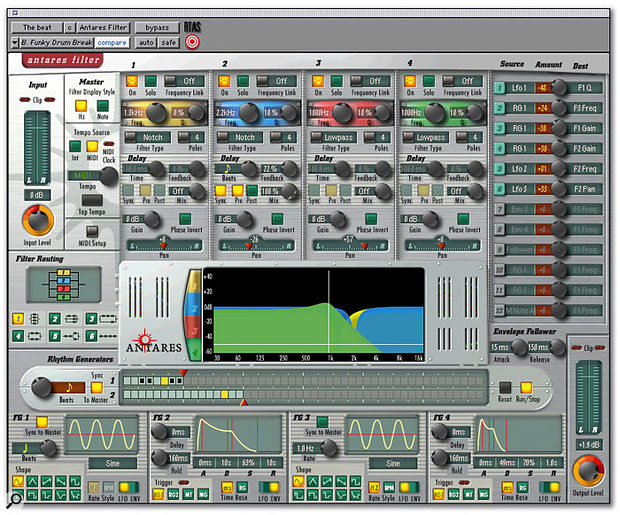 The second is Antares' Filter, which features four stereo multi-mode filters, a complement of control sources, modulation capabilities, and features optimised for rhythmic loop-based applications. The third RTAS plug-in is Tube, a valve simulation offering a range of effects warmth to serious distortion.

Finally, it's not often we mention a book in this column, but here is one that has come to my attention. It's called Pro Tools Surround Sound Mixing, and is written by Rich Tozzoli, who describes himself as a 'surround sound guru'. In it he covers pre-production, recording, setup, mixing and delivery of surround music, and discusses formats such as DVD-Video, DVD-Audio, and SACD, showing how Pro Tools can be used to deliver mixes for these various formats. The book also covers encoding mixes for Dolby Digital and DTS, mixing to picture, and other information for working with Pro Tools.

The bonus DVD-Video disc includes over a dozen 5.1 examples of surround sound production with individual explanations for each example.