Pro Tools 6.1 adds Rewire support for both TDM and LE users. Here's a look at what it is, how it works, and how to get the best out of it.

Pro Tools made a major step forward recently when version 6.1 emerged with comprehensive Rewire support. Rewire is a software technology, developed by Propellerhead Software (of Rebirth and Reason fame), which allows two stand-alone audio applications to work closely together. Specifically, a 'Rewire client' program can route multiple channels of audio internally into the Pro Tools mixer. In turn, Pro Tools (the 'Rewire Master') can route its MIDI tracks to destinations in the client program. Additionally, the two program's transport controls and timelines are automatically sync'ed together.

What's particularly attractive about the scheme is that it all happens with very little input from the user. For the past few years it's been possible to achieve similar results on the Mac (using Pro Tools's Direct Connect to route audio, and OMS to create internal MIDI connections), but Rewire can do more with its 64 channels and its solid sync'ing, is much simpler, and is supported by a wider range of software.

Rewire inputs are brought into Pro Tools tracks via the Rewire RTAS plug-in.There's not much to learn in order to take advantage of Rewire, as the system intelligently configures itself when you launch the two programs. Your main job is choosing the routing of audio and MIDI. I've been using Pro Tools 6.1 with Reason 2.5, so I'll describe the procedure based on this combination. Hopefully, these basic steps will translate smoothly to other programs.

Step 1: launch Pro Tools. The only rule to remember with Rewire is to load the Master application first, and quit it last. Pro Tools is pretty smart, though, and will warn you if you try to quit while a Rewire client is running.

Step 2: launch Reason. Reason will detect that Pro Tools is running and load up in such a way as to be immediately ready to run as a client. The Reason Hardware Interface module (see screen shot) will indicate that Reason is in Rewire slave mode.

Pro Tools MIDI tracks automatically see instruments in the Rewire slave program.Step 3: create Rewire inputs in Pro Tools. Inputs are accessed from RTAS plug-ins inserted in standard audio tracks or aux input tracks. The use of RTAS means that Rewire is more flexible in LE, as TDM systems cannot insert RTAS plug-ins on aux input tracks. If you have LE, you should definitely use aux input channels, whereas TDM users will need to use record-armed audio tracks. The screen shot (left) shows an example. The plug-in is named simply Reason and has a pop-up channel selector to pick from the 64 available connections in Reason (I've picked channel 3).

Step 4: connect something in Reason. If Reason is fired up with the default song, you'll have a mixer module with the main stereo outputs connected to Rewire ports 1 and 2 (always labelled Mix L and R). When using Rewire it makes more sense to connect your Reason sound modules directly to the interface module so they are routed directly to individual channels in Pro Tools. Otherwise you'll end up with two mixers to deal with, and lose the advantage of Pro Tools's mix environment and plug-ins. In the screen shot above you'll see that the Subtractor and Malstrom modules each have their own channels in my Pro Tools Session.

Connecting Pro Tools MIDI tracks via Rewire is so simple and elegant that it's hardly worth explaining! The screen shot above will probably tell you most of what you need to know. Here, I've created a MIDI track, clicked on the output selector, and by some voodoo all the instruments in the Reason song are presented for selection. Sweet. The Transport linking and sync are just as clever. As soon as you've made a connection between Pro Tools and Reason, hitting Play in either application will start up both. Sync between the Pro Tools timeline and Reason's sequencer is automatically handled without any messing about with timecode or Beat Clock. In fact I was amazed to see that even the left and right loop locators will follow each other when moved in either program, and looping can be switched on or off from either side.

A quick warning if you're planning to rush out to buy one of the new G5 Macs: if you've got Digidesign PCI cards they may not be compatible — ever. Mix Core and Farm cards are fine, as are the HD Core and Process boards, but earlier TDM systems (such as Pro Tools 24) are physically incompatible with the G5's PCI buss. This includes the lower clock-speed G5 models that don't use the newer PCI standard, as they still don't supply the voltage required by the older cards. Most notable among the incompatible systems is the Digi 001. The full list of cards that won't work is: PT|24 and PTIII TDM components (d24, old DSP Farm, PTIII Core, Mix I/O interface connector), Audiomedia III, Project, Project II, Samplecell II, Digi 001. 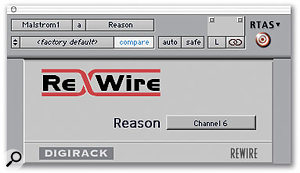 Two channels can be brought into a stereo track via a multi-mono Rewire plug-in. Switch off the Link button (linked rings icon) to set the L and R separately.Stereo connections: Rewire audio ports can be mono, or linked as stereo pairs. In Reason, Rewire channels 1 and 2 are linked as stereo, with all other channels designated as mono. In Pro Tools there are stereo and multi-mono versions of the Rewire/Reason RTAS plug-in which can be inserted on stereo tracks or aux inputs. The stereo plug-in will only show up the one stereo pair (Mix L-R) so for other stereo inputs you'll need to use the multi-mono plug-in. The important point here is that you'll need to unlink the L and R channels of the plug-in using the Link button in the top right of the plug-in window (see screen shot below). You can now select the L and R sides of the plug-in separately (again from the buttons on the top right) and select the two Rewire inputs.

Recording Rewire inputs: Unlike many other Rewire master programs, in Pro Tools it's easy to record inputs to disk without having to bounce one track at a time. Simply create audio tracks, and route the outputs of your Rewired aux input channels to these tracks using Pro Tools's internal busses. With TDM systems, where you have to come in via audio tracks, you'll still need to buss to other tracks. This is due to the signal path in Pro Tools audio tracks, where audio is recorded pre-inserts.

Buffer and CPU settings in Pro Tools: When running in Rewire mode, Reason (like other Rewire clients) runs under the umbrella of Pro Tools as far the CPU is concerned. You should push up the CPU limit in Pro Tools's Playback Engine settings in the Setups menu to account for this. You should also consider pushing up the hardware buffer setting to ease the strain when there are lots of connections. Having said all that, performance is surprisingly good. I'm running an 800MHz Apple iBook with an M Box, and Rewired a song with 16 channels to Pro Tools LE and it didn't even blink.

Mac OS 9: Not running PT6 because you're sticking (or stuck) with Mac OS 9? There's a way of taking advantage of Rewire technology, using a clever program call Refuse. Refuse was featured in Pro Tools Notes in September last year, and can be found at www.refusesoftware.com.

Pro Tools 6.1 is available for Windows XP and Mac OS X for most Pro Tools sytems. If you've already got version 6.0, the upgrade is free, and can either be downloaded from www.digidesign.com (you'll need your 6.0 serial number), or picked up on CD from your Digidesign dealer. The upgrade from 5.x is US$195 (TDM) or US$75 (LE).