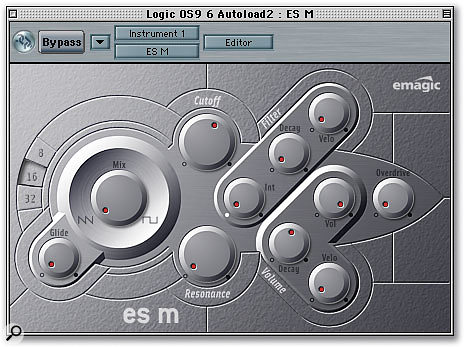 Logic has a number of simple synths built in, and they're surprisingly useful if you know what you're doing, so here's some advice on getting the best out of each one. Plus there's a bumper crop of sequencing tips to make your sessions faster and more productive.

The last few versions of Logic have shipped with three built-in virtual instrument plug-ins — four if you count the Klopfgeist pantomime horse simulator, which personally I don't! For those who simply have to know, Klopfgeist produces a kind of polyphonic resonant 'blunk' with variable 'blunkness' and adjustable Note Off damping. It can be used to create staggeringly banal bass sounds and blips or to play a briefly amusing version of 'Popcorn', but other than that its only practical use is as a metronome sound. By contrast, although the other three 'free' instruments are still fairly basic when compared with 'hand over some real money' plug-ins, they are nevertheless useful, and can be made more interesting by combining them with Logic's effect plug-ins.

ESM (depicted above) is a very simple monosynth based around a single tone oscillator, the waveshape of which is continuously mixable between sawtooth and square. Three octave-range settings are available (8, 16 and 32) as well as variable glide/portamento. The tone oscillator feeds into a classic low-pass resonant filter with Cutoff (frequency) and Resonance parameters, where the cutoff frequency may simultaneously be modulated by an envelope decay time control and by velocity. 'Envelope' may actually be too generous a term to apply here, as the amplitude envelope section comprises only a Decay control, with the option to utilise varying degrees of keyboard dynamics. The final stage is a variable Overdrive control. Though this synth looks pathetically simple, it's capable of delivering simpler monosynth lead tones, but it really works best for bass sounds, where its sound architecture makes it very capable of emulating classic TB303 basses, particularly when the waveshape knob is set between the two- and three-o'clock positions.

To get the most mileage out of this little synth, I've found it useful to employ additional Logic effects plug-ins. For example, Phase Distortion works rather better than the built-in distortion to add edge and complexity to the sound, though if you do decide to use the built-in distortion to any extent then you might find it useful to insert one of Logic's high-cut filters after the ESM to tame the raspy high end — unless that's what you're after! Adding delay to create echo also helps lead lines enormously, and if you don't want the echoes to get in the way too much then try the Tape Delay plug-in, where you can soften the sound of the repeats.

ESP is another conceptually simple synth, though it works polyphonically, as its main purpose is to generate pad sounds. The oscillator can work over a three-octave range, while the waveform is mixed using six sliders controlling triangle, sawtooth, rectified, sub-octave (-1), sub-octave (-2) and noise. A single modulation control works both ways from centre to provide either filter or pitch modulation, the depth being controlled by how far away from centre the knob is positioned. A further knob sets the modulation rate and the modulation seems to be either triangular or sinusoidal. By default your keyboard's mod wheel increases modulation depth. 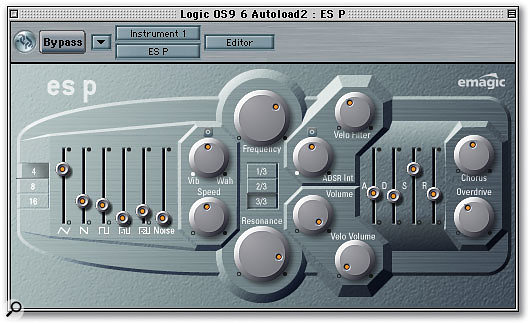 The ESP's filter section is again a simple resonant low-pass design that has three buttons to select keyboard tracking, which goes from 3/3 (regular linear tracking) via 2/3 to 1/3. The filter frequency may also be modulated in either direction via the synth's single ADSR envelope, while there's also a control for mapping velocity to filter frequency. Amplitude may be modulated via the ADSR envelope and again by velocity. Variable chorus and overdrive sections are included, and with only a little experimentation there are lots of Roland Juno-style pads to be had. Logic's Mod Delay plug-in is useful to add further space and movement to these pad sounds, and, as with ESM, a high-cut filter is useful for taming the top-end grit where the distortion has been used. There are also some very nice gentle sweep effects to be had by setting the resonance to between 60 and 70 percent, then using the LFO modulation section to sweep the filter at around 50 percent and at a rate of 0.1-0.15Hz. Overdrive works well to add richness without fizz at settings below 50 percent. 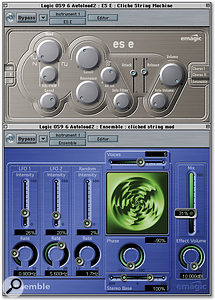 Here you can see settings for creating a generic string machine patch.ESE is ostensibly an ensemble string/pad synth, but, like the others in the range, it can be also be used to generate leads and bass lines. It is somewhat simpler than ESP, having a single knob to sweep the source waveform between sawtooth and square via all the possible pulse-width permutations. Again the oscillator may be switched over three octaves, while pulse-width modulation is furnished via a dedicated control (which doubles as a vibrato control when the sawtooth wave is selected as a source). This has its own variable-rate modulation LFO, but be aware that you can modulate the pulse width right down to zero at extreme settings, in which case the sound disappears! The same resonant low-pass filter is used, offering envelope or velocity modulation only, and the envelope section has been simplified to offer just attack and release controls.

Velocity sensitivity is controllable in the usual way, but what sets this synth apart from the others is the inclusion of two chorus settings and one ensemble (multi-chorus) setting. With attack and release both set at around 50 percent, you can conjure up some pretty authentic vintage string machine tones, though patching the Logic Ensemble plug-in after the unit and selecting the Solina String Machine patch adds much needed richness to the existing ensemble engine. You can see my own version of settings for creating a string machine cliché in the screenshot (right).

Just because Logic's built-in virtual instruments are very simple and they come free with the software, don't assume that they're simply toys (other than Klopfgeist, which will require several updates before it qualifies as a toy!). With a little care, they can emulate the type of vintage analogue synth that you'd normally have to pay a lot of money for, and by augmenting their sounds using Logic's plug-in effects, you can push their sonic capabilities a lot further than you might at first imagine. Phase Distortion is brilliant for use on all mono synth lines and percussive sounds, while the Chorus and Delay plug-ins can add life to even the cheesiest patch! Also, as these instruments are Logic's own plug-ins, you can automate all the key parameters in real time, which can be particularly useful for string-like parts, as you may need to vary the attack time depending on how fast you're playing. If you happen to have the Emagic Hammond organ emulation plug-in, you can also use the rotary speaker effect as a separate plug-in, which works very nicely on pad parts.