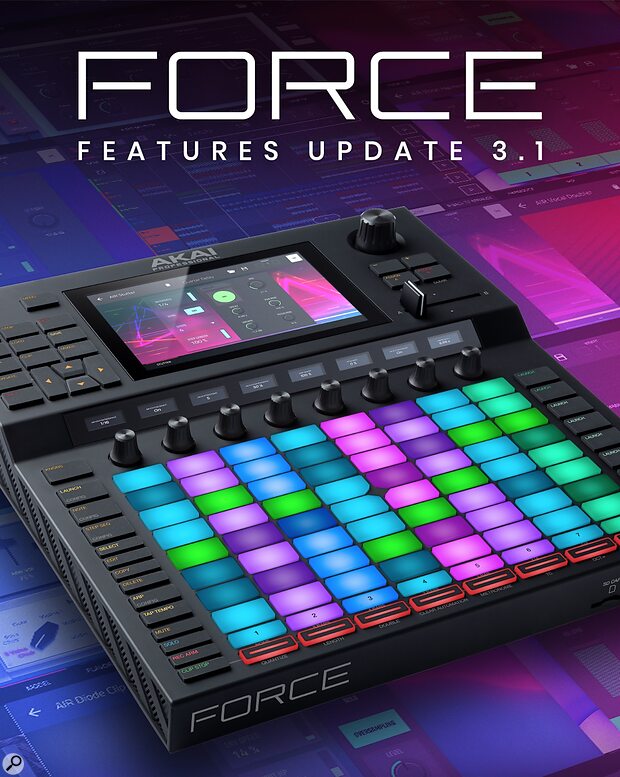 Akai's all-in-one grid-based music production system, the Force, has received yet another major firmware update. Last time, it was version 3.05, which addressed one of only two 'cons' we identified in our original review — the lack, on launch, of a full 'song' mode.

This time, in version 3.1, they've tackled the other 'con': the inability to stream audio direct from its internal storage disk (previously, any samples you wanted to play had to be loaded into its 2GB of RAM). Now, any audio you've got stored in the Force, either in its 16GB integral drive or on any disk you've installed in its drive bay, is instantly accessible for use in your studio and live productions.

But there's a whole lot more to Force v3.1 than that! The new firmware adds compatibility with any class-compliant audio interface, so you can route up to 32 discrete channels of audio into and out of the device via a compatible USB interface.

Other enhancements include more flexible mixer routing, thanks to the new submix, return and master groups, automatic sample key detection, and a host of new instruments and effects. See Akai's bullet-point list of updates below for a full run-down, and click the video to see Force v3.1 in action.