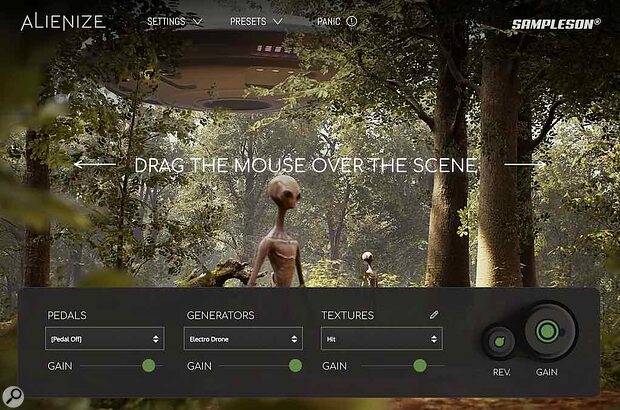 Virtual instrument manufacturer Sampleson have released Alienize, a new instrument that has been designed specifically for creating cinematic soundscapes, with a particular focus on science fiction scores.

The instrument's audio is generated from a mix of granular, wavetable and subtractive synthesis combined with sample playback, and Alienize uses the position of the user’s mouse cursor over the GUI to modulate the resulting sounds. This process can also be automated within a DAW, or assigned to a MIDI controller to be controlled by CC messages. The instrument includes 41 different sound modules cover a range of source material including , and each one responds to the gesture control.

The scaleable GUI is largely empty, with the majority of its space dedicated to capturing cursor movements. Some gain controls for the generated sounds are present along the bottom of the interface, along with a global gain control and a single control to adjust the overall amount of the plug-in’s built-in reverb.

Alienize is support on Windows 7 or later, and macOS 10.7 and above. It is available in VST3 and AU formats, and there is also a standalone app version. There is no AAX version however, meaning that Pro Tools is not supported.

Alienize is available now from the Sampleson website for an introductory price of $39 until 31 October 2022, after which it will be priced at $59.