The night before Superbooth 2019 opened, Swedish performance synth manufacturers Elektron announced (and immediately put on sale) a keyboard version of last year's Digitone FM synth groovebox, demoing the instrument at their new 'studios' on Friedrichstrasse in central Berlin, a couple of minutes' walk from the former Checkpoint Charlie. The premises, which were opened to the public for the first time for the Digitone Keys launch, are part shop, part demo facility, part meeting/training space, and part venue for performances and visual arts collaborations — all 'very Elektron'! 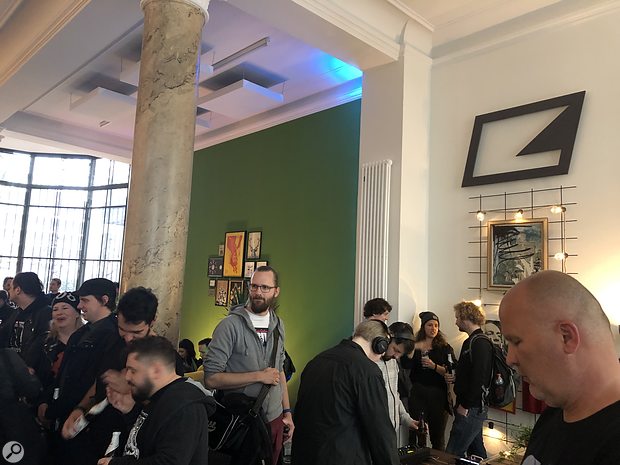 The opening night at Elektron's new studios in Berlin's Friedrichstraße, where the Digitone Keys was launched.

Digitone Keys has the same eight-note polyphonic, four-part multitimbral FM synth engine, subtractive filters, built-in effects and powerful performance sequencer as the original tabletop Digitone (see our review from SOS September 2018 [www.soundonsound.com/reviews/elektron-digitone]), but sets it next to a 37-note velocity- and pressure-sensitive keyboard with aftertouch, and adds modulation and pitch wheels (a surprising first for Elektron), portamento, four independent rear-panel stereo outputs (one for each multitimbral synth part), and eight assignable knobs above the keyboard, allowing users to access eight parameters of choice for real-time tweaking as they play. Sounds can be distributed across the keyboard for playback with the Multimap facility, which also allows players to set up single-key triggering of sequencer patterns from different parts of the keyboard. 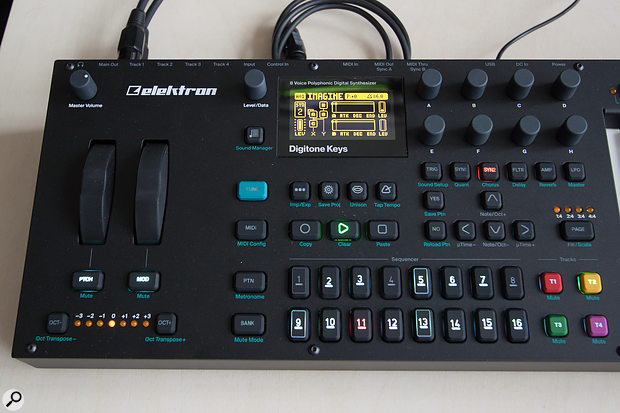 The sequencer and sound-shaping controls are all found at the left-hand end of the Digitone Keys.

The physical layout of the Digitone Keys, with all the controls from the original Digitone up the left end and the keyboard on the right, recall the similarly 'long and narrow' layout of Elektron's first keyboard instrument, 2004's MonoMachine. Readers with long memories will recall that Elektron claimed the design came from a desire to make it possible for one player to play the keyboard on the right while another manipulated the sound separately at the left end — and also that they were simply bored of instruments with the sound-shaping controls above the keyboard...!

The Digitone Keys retails for £1180$1299, and a limited run was immediately available to buy direct from Elektron's site, but just over a day after the launch, all of these instruments had already sold out. Prospective customers will now have to wait for the Digitone Keys to arrive in shops, which will take a few weeks.

To see and hear the Digitone Keys in action, check out the video below, which was shot on the Elektron stand at Superbooth on the first day of the show.