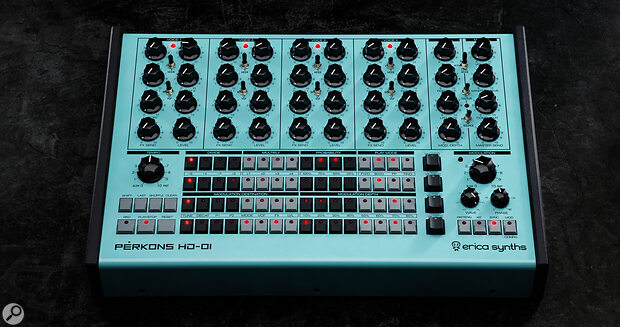 We don't use the term 'absolute beast' lightly at SOS, but in the case of Erica Synths' new drum machine we think it's more than warranted. Named after the Baltic god of thunder, the Pērkons is a four-voice percussion synth that combines digital sound generation with an analogue multi-mode filter per voice.

It's also a four-track step sequencer with numerous bells and whistles, such as parameter automation, 4x division/multiplication, per-step ratcheting, four shuffle algorithms and probabilistic triggering. It's also a mixer, with direct outputs per voice, a master output (including a dedicated headphone jack), and a built-in analogue bucket-brigade delay. Oh, and it's also got an overdrive circuit and an optical compressor strapped across the main mix.

The remaining I/O comprise clock send/receive, per-voice velocity sensitive trigger inputs, and per-voice send and receive sockets for incorporating your own hardware pedals and effects units. There's an SD card slot present round the back too, for saving and recalling your kit and pattern memories.

The Erica Synths Pērkons is thus a self-contained percussion powerhouse, as well as an object of considerable beauty. It's priced at $1999 in the States and €1650 (exc VAT) in Europe, and we want one!