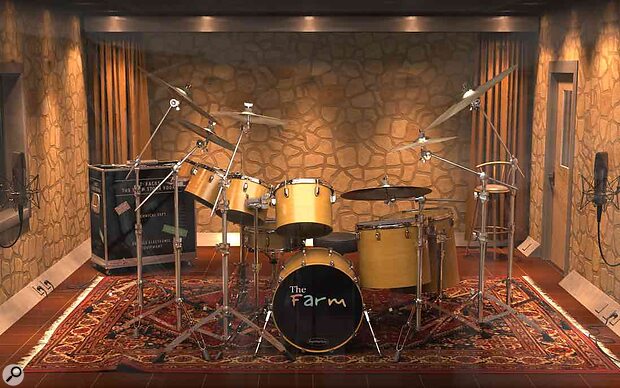 IK Multimedia have announced the release of The Farm Stone Room, a new reverb available for their T-RackS 5 software suite and as a standalone plug-in. Combining a faithful reproduction of the stone room at Genesis’ Fisher Lane Farm studios with a modelled SSL Listen Mic Compressor, the reverb aims to help users recreate Phil Collins’ legendary drum sound.

With the original Townhouse Studios closed, Genesis enlisted the original engineer, Hugh Padgham, to build a drum room to exactly the same specifications at their Fisher Lane Farm facility. IK Multimedia were given exclusive access to the space, aiming to capture and preserve its distinctive sound in software form.

The Farm Stone Room offers two room reverb channels: Stereo Room, which has been captured with a pair of Neumann U87s, and Mono Crush, which offers the signal from an STC 4021 ‘Ball and Biscuit’ microphone. Each of the channels is equipped with Level and Pan controls along with an EQ (a fixed three-band for the former, and a three-band with semi-parametric mid-band for the latter).

The Stereo Room channel also benefits from a Width control and a transparent compressor section equipped with Threshold and Mix parameters, whilst the Mono Crush channel features the modelled SSL Listen Mic Compressor. Threshold and Mix controls are once again provided, with the section offering an aggressive compression character capable of providing the distinctive drum sound associated with tracks such as Phil Collins’ ‘In The Air Tonight’, Genesis’ ‘Mama’ and Peter Gabriel’s ‘Intruder’.

A Reverb section provides users with Pre-Delay, Decay, Size, and High-Pass Filter parameters for shaping their reverb sound, and there are also switchable Curtain Open and Curtain Closed modes, offering a choice between brighter and darker overall tones.

The plug-in models the EQ and dynamics sections of an SSL 4000G, the console used at both Fisher Lane Farm and Townhouse Studios.

T-RackS 5 is supported on PC’s running Windows 7, 8, or 10, and Macs running macOS X 10.10 or above. With this latest release, T-RackS is now also natively supported on Apple Silicon processors. As a standalone plug-in, The Farm Stone Room is available in AU, VST2, VST3, and AAX formats.