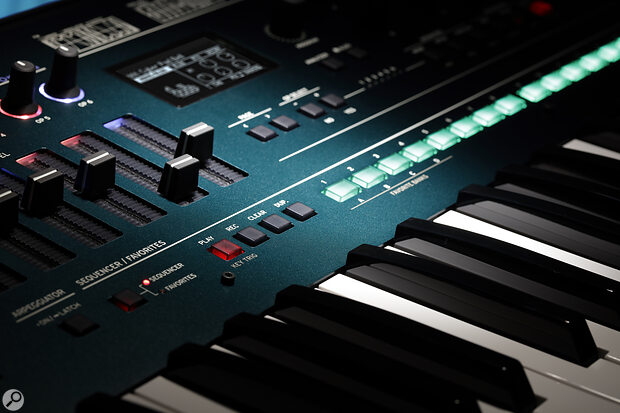 Hot on the heels of Korg's recently revealed Nautilus workstation comes a new FM synth, called OpSix. It follows a similar form-factor to the same company's WaveState, from its shallow wedge shape to its 37 mini keys, and includes a 16-step sequencer too.

There the similarities end, however. Whereas the Wavestate generated sounds using a proprietary Korg technique called Wave Sequencing (in which multiple waveform samples are played sequentially, and crossfaded between, to create evolving sounds and textures), the newcomer uses frequency modulation, a method of synthesis made famous by Yamaha's DX series synths. 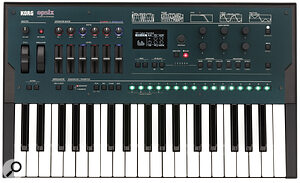 As its name suggests, the OpSix is a six-operator instrument, with each of its vertical faders and attendant knobs controlling the level and tuning of each operator. This hands-on control sets the OpSix apart from other FM synths, which have in the past been notorious for being unintuitive at best and often arcane.

In a bid to make FM synthesis even more accessible, Korg have also fitted the OpSix with a traditional filter section, which offers 11 different modes including an emulation of the Korg MS20's low- and high-pass filters, and a recreation of the LPF on the classic Polysix.

Further tone-shaping options are provided by the OpSix's three effects slots, into which you can insert any of 30 different processors, these including all the mainstays such as delay and reverb, plus compression, rotary speaker effects and more.

In terms of connectivity, the OpSix features MIDI in and out on both standard 5-pin DIN sockets and over USB, presents its stereo audio output on a pair of jacks plus a headphone socket, and features one last jack socket on the back for a damper pedal.

The OpSix is due to go on sale in December, and will carry a price of £699. Check out the video below to hear it in action.