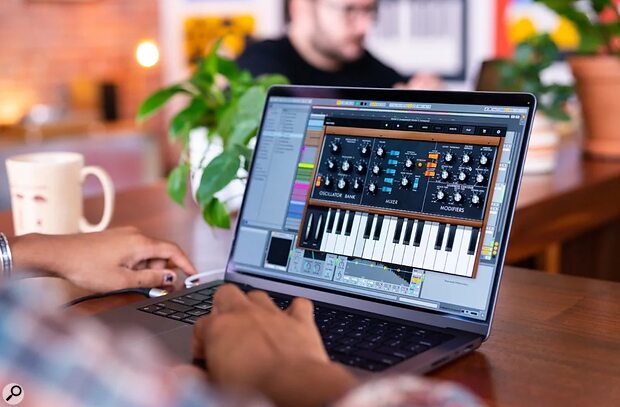 Moog recently launched the Minimoog Model D App, a software recreation of their legendary monophonic synthesizer. First released solely for iPhones and iPads, the Minimoog Model D App has now already been updated for use with macOS, allowing it to run on all Mac computers equipped with Big Sur or newer, and it is compatible with all major DAWs.

Now optimised for both iOS and macOS, anyone with an Apple device can jump in and play, whether using a macOS device through Audio Unit v3, using a VST3/AUv2 wrapper, or as a standalone sound design tool.  All the controls from the original Minimoog Model D are closely modelled in the app version, as well as several improved features which were not present in the original.

The app includes over 160 presets ranging from organ patches and vintage bass tones to sci-fi sounds and soft, pastoral leads. There is also a random preset generator function, the ability to play chords with up to four-note polyphony, a built-in arpeggiator, real-time looping recorder with unlimited overdub capacity, a ping-pong stereo delay module and a wide-range stereo time effect.

The Moog Minimoog Model D App is available now for iPad, iPhone and Mac from the Apple App Store for £25.99$29.99.