The company have now released Kore 2, and added new features, including built-in sounds derived from NI's Absynth, FM8, Guitar Rig, Kontakt, Massive and Reaktor software instruments. To compliment the sound engines, there's a library of over 500 Kore Sounds, which includes content by US-based sample programmers Sonivox. Each sound can be assigned up to eight variations, then a neat morphing interface can be used to mix between the variations. 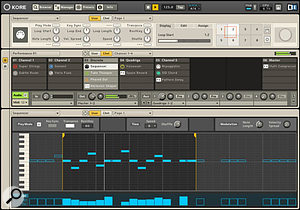 Another new feature is a sound browser that, according to NI, "takes the acclaimed 'find sounds fast' paradigm of the system to the next level". Users can now audition sounds directly from the browser using a new Prelisten feature, and an improved Quick Search function enables file browsing in a fashion that's not dissimilar to iTunes.

But it's not just the software that has been updated. After surveying Kore customers, NI chose to do away with the audio interface features of the original hardware module, and cut it down to a controller-only unit. It therefore doesn't carry the input and output knobs on the top panel and it's also slimmer, as there's less electronics inside. 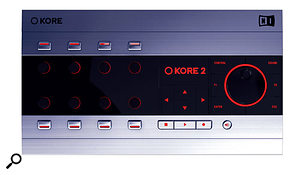 Despite the changes to the system, current Kore users will be able to benefit from the software update, and their hardware will be compatible with the new features in version two. Kore 2 costs £329 and should be shipping in June.

What's more, if you buy Kore 1 now from your nearest retailer, you'll be eligible for a free upgrade to Kore 2, as soon as it becomes available.