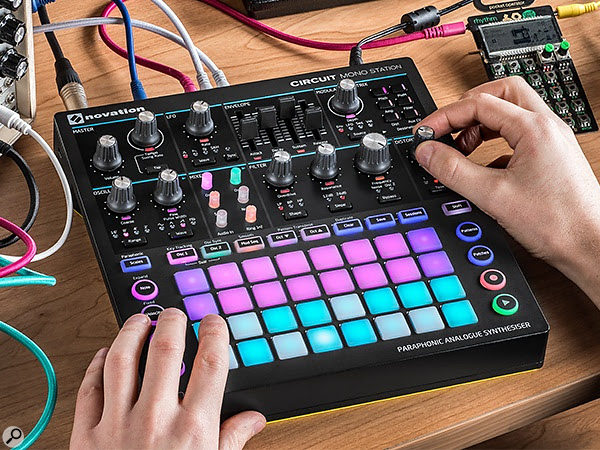 For a first stab at the renascent groovebox genre, the Novation Circuit got an awful lot right. Portable, powerful and fun to use, this self-contained instrument combined the grid-based sequencing of the Launchpad controllers with analogue-modelled synth and drum sounds. Now Novation have added a second unit to their groovebox range, and this time it’s a dedicated analogue synthesizer with a wealth of hands-on controls.

Launching alongside their brand new eight-voice polysynth, Peak, at the Superbooth show in Berlin, the Circuit Mono Station is a paraphonic analogue synth derived from the Bass Station. It has two oscillators with individually controllable sync and tuning parameters and a choice of four wave shapes (sine, triangle, saw and square with variable pulse width), plus a sub-oscillator, ring modulator and noise generator. The single multi-mode filter offers high-, low- and band-pass shapes at 12 or 24 dB per octave, and features frequency, resonance and overdrive controls. With a separate three-mode distortion effect also on board, the Circuit Mono Station looks like no shrinking violet.

The LFO, offering saw, triangle, square and sample and hold wave shapes, and envelope both feed into a four-by-eight modulation matrix giving a good degree of control over pitch, pulse width, amp, filter, distortion and even CV. This is coupled with thoughtful features like the use of sliders rather than knobs for the envelope and a single, prominent depth control for the mod matrix, suggesting that Novation are once again aiming for an instant, intuitive user experience.

All of this sits above the same 32 velocity-sensitive pads found on the Circuit, this time controlling a choice of three sequencers — two oscillator sequencers and one modulation sequencer. The pads can also act as a keyboard in Scales mode. Up to 64 patches can be stored on the Circuit Mono Station, and can then be backed up to Mac or PC via the USB port. There are plenty of other physical connectors too, with audio in and out, MIDI in, out and thru, clock in and out, and CV and gate outputs.

The Circuit Mono Station will cost $499/£479 and will be available from July of this year.