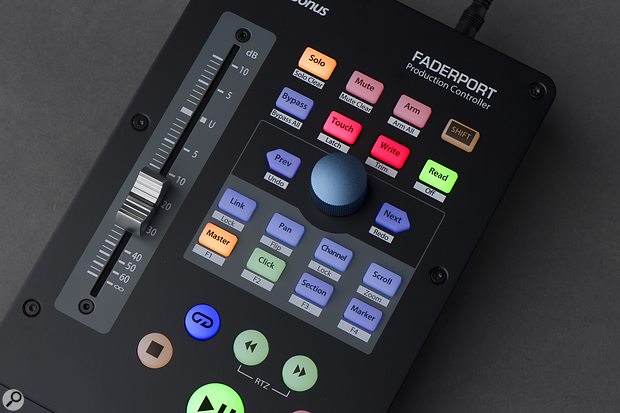 The original FaderPort was pretty revolutionary when it was introduced over a decade ago — with only a single touch-sensitive fader, DAW transport controls and various channel controls, it was simple to use. "Simple though it is, the Faderport makes operating a DAW far more pleasurable than working by mouse and keyboard alone” said Paul White in his June 2007 review.

Today, PreSonus have unveiled an update to their single-fader design incorporating some of the new features seen in their recent FaderPort 8 and FaderPort 16 designs.

The new FaderPort keeps the 100mm touch-sensitive moving fader but the key difference is in the integration with a variety of DAWs, rather than just Studio One. Modes are available for Studio One, Pro Tools, Logic Pro, Cubase and Ableton Live. What’s going to come in handy the most is the new session navigator which allows you to link adjacent channels, pan, scroll, zoom, nudge regions, drop markers and quickly dedicate the fader to your Master fader.

As before, all the standard transport controls are also present and correct — play/pause, stop, record, cycle, fast-forward and rewind, as well as an RTZ (return to zero) function. There’s also a footswitch input, allowing you to punch in and out of record while playing. In addition, automation modes can be easily invoked on the front panel, as can channel solo, mute and record arm.

The Studio 2|4, meanwhile is a 2-in, 4-out USB recording interface which critically features a USB-C connector. Offering two mic/line/inst inputs, two balanced line outputs, a headphone output with separate feeds, plus MIDI I/O on 5-pin DIN. It operates at sample rates up to 192kHz with bit depths up to 24-bit.

PreSonus are additionally touting their improved front-panel metering which should make recording at a sensible level easier. It ships with two cables — a USB-C for those on newer machines and also a USB-C-to-A. As with all PreSonus interfaces, it comes bundled with a full copy of Studio One Artist DAW. It will retail for $149.It will retail for £139.