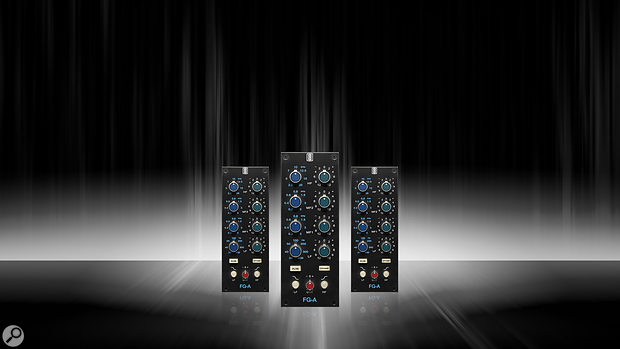 Plug-in purveyors Slate Digital have introduced their latest emulation of a classic piece of studio hardware. The new plug-in, dubbed the FG-A Vintage American Equalizer, is a recreation of the revered API 550 four-band EQ. The original garnered acclaim thanks to its use of all-discrete 2520 op-amp gain stages and its 'proportional Q’ curves. The idea behind proportional Q is that as a frequency is boosted, the filter bandwidth narrows. This makes for an EQ that can be both surgical and gentle depending on the gain setting. "Another claimed advantage of this approach is the minimisation of the 'phase-shift sound,' which afflicts many equalisers” notes Technical Editor Hugh Robjohns in his 2007 review of the API 5500.

This is far from being the first time we’ve seen a plug-in recreation of the API 550, though. Authorised versions have been created by Universal Audio and Waves, as have some unauthorised versions, from the likes of Volko.

Where the Slate Digital FG-A aims to stand out from the crowd is in its handling of nonlinear colouration. According to the company’s literature, "nonlinear coloration is dynamically dependent on the settings, which is something that we found in the hardware but not in any other emulation of the hardware. Therefore, pros will likely hear something unique about the FG-A, even if they have similar plugins from other developers.” Given the technology they’ve brought to bear for the rest of their plug-ins, this is an intriguing prospect.

Slate Digital additionally claim that the 550’s exact proportional Q curves have been modelled in their offering. On the feature side, the topology of the plug-in can also be varied depending on the EQ settings so the analogue colouring can be added before or after each band.

In the below video, CEO Steven Slate lets us hear the EQ plug-in in action. He claims that the high frequency band can be pushed without ever sounding harsh, and describes it as “some of the smoothest, clearest top end you’re gonna get out of any EQ.” The saturation also sounds pretty convincing at 3.14 in the video. Take a listen for yourself.

FG-A is available right now to those with an Everything Bundle subscription, which gives you access to all the Slate plug-ins. You can also buy the plug-in outright for an introductory price of $149 (ordinarily $179).