Tascam have announced the upcoming release of a new Sonicview digital console series. Comprising 16- and 24-channel console options, each with built-in 32-bit/96kHz multi-channel USB audio interface functionality, and a Dante-equipped stagebox, the range offers a powerful and versatile solution to the recording, touring, installed sound and broadcast markets. 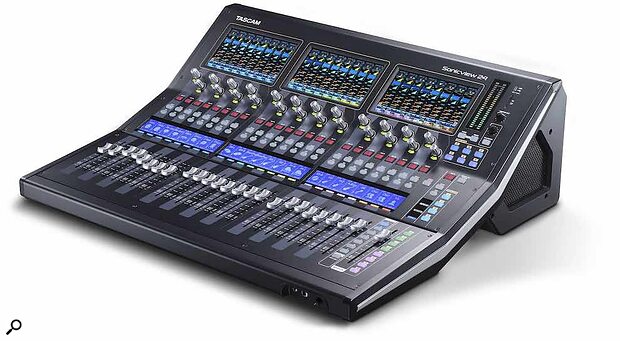 The larger of the two consoles, the Sonicview 24, features 24 motorised channel faders and three touchscreens.

The series features two new consoles, the Sonicview 16, and Sonicview 24, with the former offering 16 physical input channels and motorised faders, and the latter providing 24. Both consoles employ Tascam’s HDIA microphone preamps and share the same internal architecture, which supports a total of 44 input channels (40 mono and two stereo channels), along with 22 flexible output buses, a main stereo output bus, and an internal SD/USB stereo recorder.

Both variants also utilise the company’s newly developed VIEW (Visual Interactive Ergonomic Workflow) user interface, which offers quick and convenient control over all system parameters via built-in touchscreens (of which there are two on the Sonicview 16, and three on the Sonicview 24) and user-definable buttons.

Three different viewing modes are available: Channel Strip View mimics the layout of an analogue mixer by displaying a row of parameters for the channels placed below the screen, Module View displays any two sets of chosen parameters for a single channel (or three sets in the case of the Sonicview 24), and Individual View allows each screen to display a custom selection of functions for any channel or group.

As you’d expect with a modern digital console, a wealth of processing options are available, with every channel able to utilise any or all of the 11 following processors or routing options: Input/Pre-fader Delay, Phase, Digital Trim, High-Pass Filter, Gate/Expander/De-Esser, 4-Band Parametric EQ, Compressor/Ducker, Solo, Mix 1-22 Send/Pan (Pre/Post), FX 1-4 Send/Pan (Pre/Post), and Fader/Pan/Mute to L/R. 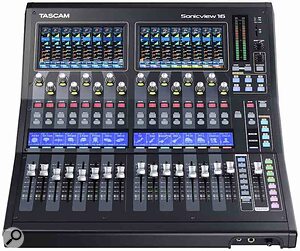 The Sonicview 16 features the same internal architecture, but in a smaller frame with less local I/O.Both consoles boast eight DCAs for easy control over groups of channels, and programmable layer keys allow users to assign to custom combinations of channels and buses to the motorised faders. Each of the 22 flexible output buses can be configured as subgroups, aux outputs, or matrices, and are equipped with a 31-band graphic EQ, real-time analyser, four-band parametric EQ, compressor/ducker, and a delay function.

In addition to the local I/O, which is provided on an assortment of XLR, TRS, and RCA connectors on the rear panel of each console, the Sonicview 16 and 24 both feature a 64-channel Dante interface, and are capable of functioning as a 32-bit/96kHz multi-channel USB audio interface.

Their capabilities can be enhanced further still with a range of optional expansion cards, which deliver features such as on-board 32-track recording directly to an SD card, additional analogue outputs, and MADI or AES/EBU digital connectivity.

A Wi-Fi router can also be connected via the console’s Ethernet port, allowing remote control via the free Tascam Sonicview Control software, which is available for macOS, Windows, and iPadOS platforms.

In addition to the new consoles, Tascam have also introduced the SB-16D Dante-equipped digital stagebox. Capable of being used as a freestanding device or being fitted into a rack, the unit comes loaded with 16 analogue microphone/line-level inputs that employ the same HDIA preamps as the mixers themselves, and 16 line-level outputs.

The SB-16D’s preamps can be controlled remotely from either of the Sonicview consoles, and once connected, all of the stagebox’s inputs and outputs are displayed on the mixer’s touchscreen and can be assigned in the same way as the local I/O.

Those who need more than 16 channels can simply connect multiple units together, and because the device communicates via Dante, it’s possible to use an SB-16D with any other Dante-capable Tascam product. The stagebox also features eight channels of GPIO (General Purpose Input/Output) to offer control when being used with Dante systems made by other manufacturers.

The first official showing of the Sonicview series will take place between 31 January and 3 February 2023 at the ISE show in Barcelona, with a final release date yet to be confirmed. Pricing is as follows: