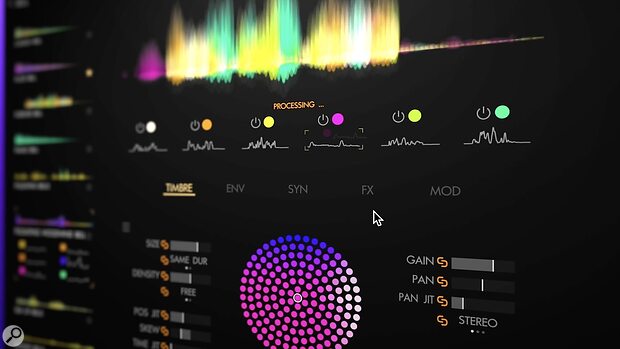 Novum allows users to generate up to six independent layers from a single sample. Samples can be dragged and dropped onto the GUI, where they are ‘decomposed’ into the six layers, each one equipped with its own set of timbre, filter, envelope, effects and modulation controls. The instrument also provides the ability to lock a sample in place, and then browse through presets which are then combined with the imported sounds, offering dozens of unique variations within seconds. 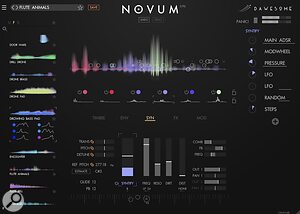 Tracktion Novum GUIIn addition to the more familiar envelope, filter and modulation controls, the plug-in’s timbre tab offers a unique way to introduce variation to layers, which the creators have called the ‘Timbre Flower’. This feature presents the sound as a circle made up of selectable dots with the original sound placed in the middle, and variations of that sound mapped to each of the other dots. Tracktion say that soloing a layer and experimenting with the feature is the best way to understand its capabilities.

Check out the walkthrough video below, where creator Peter V demonstrates Novum’s capabilities.

The plug-in is available in AU and VST3 formats, supported on macOS 10.11 and above, and in VST3 on Windows 10 and 11. Native support for Apple’s M1 and M2 processors is also provided.

Novum is available now, priced at $179. Tracktion are currently offering an introductory price reduction of 30%.