When German DIY electronics whiz Moritz Klein and trailblazing Latvian developers Erica Synths join forces, you know something special is afoot. As mki x es.EDU, their goal is “to teach people with little to no prior experience how to design analogue synthesizer circuits from scratch”. An ambitious undertaking indeed. The resulting nine kits include a sequencer, wavefolder, noise and S&H module, a mixer, VCF, envelope generator, mixer and PSU, as well as the VCO and dual VCA. 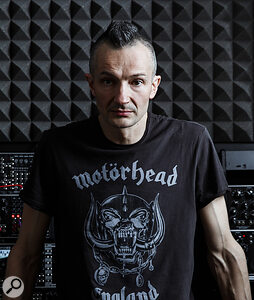 Girts Ozolins.Here, Klein and Erica Synths founder Girts Ozolins take the SOS Q&A on their respective journeys into modular, some of their favourite modules, and reflections on their own work.

On their entry into modular

Girts: I grew up in a small village and from early childhood had a drive to invent things. I didn’t have any reasonable tools, advice or examples from others to follow in my teenage years but I still built things like a velomobile, a delta plane — which luckily didn’t fly — I turned an accordion into an aqualung and all sorts of totally crazy stuff! When I was in primary school, I ‘borrowed’ from the library a book about DIY electronics and totally fell in for it. Back then Latvia was a part of the Soviet Union so we were basically isolated from information from the outside world, but I subscribed to DIY monthly magazines available in the USSR. At the beginning of the ’90s I moved to Riga, the capital city of Latvia, to study and to become a physics teacher. Then Latvia gained independence, the market opened and Western‑produced electronics become available.

Around 10 years ago I decided to make an electronics DIY kit for my son. It consisted of small boxes, each hosting a component — an LED, a potentiometer and so on — connectable via patch cables to make electronic circuits. When I had about 20 different boxes developed, I searched the internet for the schematics of ‘something that makes sound’ and came across [DIY synth site] Music From Outer Space. In the next three to four years I built DIY projects in all possible formats. In 2013 I started to sell my own DIY kits on forums, and soon after registered a company, Erica Synths. 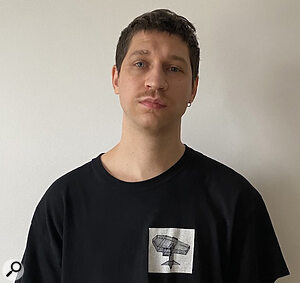 Moritz Klein.Moritz: My first proper contact with synthesizers actually happened quite late, in my late 20s. I grew up in a rather small German city that nevertheless had a tight‑knit, super active metal and hardcore music scene. I played drums and occasionally sang in multiple death metal and hardcore bands. At some point I made the decision to move to Berlin for a master’s degree in cultural studies. Expecting a much bigger and much livelier band scene, I was initially disheartened to find that most people there preferred to record techno jams in their bedroom instead! To find out what the fuss is about, I bought myself a [Korg] MS20 Mini and started fooling around with it. Turns out that plugging cables into patch points to create weird, sci‑fi‑ish sounds is great fun! Even more fun, it turns out, is figuring out how these things work under the hood, which is what I’ve been doing ever since.

Girts: I’ve built huge DIY Buchla 100 Series, Buchla 200 Series and Serge Modular systems for our residency studio, and they are awesome; both in terms of user interface and sound. They offer quite a different modular experience and are highly inspiring. For Eurorack, WMD physical modelling percussion modules are great. On the more experimental side, the Genki Instruments and Instruments Of Things gesture controllers are ones that stand out, because I treat Eurorack as an open, experimental system to be used with a bunch of weird external controls.

Moritz: I have a confession to make here: I’ve never actually bought any Eurorack modules! The mki x es.EDU prototypes are the first — and only — ones that I own. So I’ll have to divert the question a little and instead talk about my go‑to synths. I bought an old Korg Poly‑800 some time back, which I really love for lo‑fi, grungy‑sounding pads. Especially the weird, crude sawtooth oscillator shines when stacked up in an intricate chord. On a similar note, I got myself a Roland TR‑606, which sounds delightfully ding‑y, especially the kick and hi‑hats.

On working together as mki x es.EDU

mki x es.EDU VCO module.Girts: I had an idea of developing easy‑to‑build, affordable and educational DIY kits several years ago. We at Erica Synths were — and are constantly — busy with super advanced projects, so I tried collaborations with several students from Riga Technical University but it didn’t work out for several reasons. I almost dropped the idea, but then I discovered Moritz’s YouTube channel and realised that he had already done about half the work! We got in touch and within a few months had all the modules for the system ready in tangible form. After another two months we launched the first module — the EDU DIY VCO [reviewed SOS June 2022].

Moritz: When I uploaded my first YouTube video, I wasn’t expecting the project to really go anywhere. I was just excited to be sharing this cool little thing that I somehow made work. One year later, when Girts and Eliza [Aboltina] contacted me with the proposal to collaborate on a line of DIY kits, it really made my head spin. I almost declined the offer because I felt like I might not be up to the task. Thankfully Girts convinced me to give it a shot anyway. Working on this has forced me to consolidate everything I’ve learned, which feels super valuable.

Girts: At the moment we have nine modules developed and are launching them one‑by‑one, every month. We decided to develop all the necessary modules to put together a classic, fully East Coast modular system. So, mki x es.EDU kits are not only a great way to make your first steps into electronics engineering, but also a good investment in a musical instrument!

Moritz: I think the full system manages a tricky balancing act. From an educational standpoint, the individual circuits need to be as stripped‑down and simple as possible, so that learning about them doesn’t turn into a chore. From a musical standpoint, you still want your modules to be as versatile and interesting as possible. Which usually means that the circuits become more complex. The mki x es.EDU circuits are extremely simple, but the full system still has a few tricks up its sleeve that make it more than just a standard monosynth — be that the aggressive wave folder, the loopable envelopes that you can use as additional oscillators for harsh FM sounds or the grungy diode‑based distortion on the three‑channel mixer.

Girts: For me a modular synthesizer is a bright example of diversity of the world we live in today. Every musician or hobbyist has a choice of thousands of modules from various manufacturers and can come up with a unique instrument. And, I believe, no other musical instrument has such a potential of building communities, making collaborations, sharing information and creativity. This you can feel in every single modular event and community. I love it!

Moritz: I love the fact that these instruments manage to get so many people interested in electronics! Especially those who would’ve never touched a resistor or capacitor otherwise. It’s awesome talking to so many people online that made the leap of faith, bought a breadboard and are now neck‑deep in op‑amp lore.