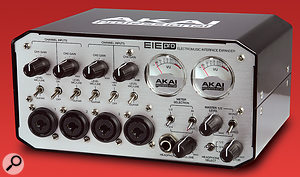 The silver and black EIE (or 'Electromusic Interface Expander') Pro is the follow-up to Akai's first foray into audio interface production — the EIE — and builds on the company's considerable reputation for manufacturing user-friendly, durable hardware. This flagship model was inspired by market research from potential customers who wanted to be able to use all inputs simultaneously at higher sample rates (a function limited on the original EIE) and the resulting product was adorned with a new paint job and 'Pro' badging.

The full complement of features is given in the 'Vital Statistics' box elsewhere, and includes four mic/line/guitar inputs with preamps, four insert points, four balanced outputs, MIDI In/Out connections and a powered three-port USB hub. All of this is contained within a sturdy metal housing featuring throw switches and a pair of illuminated VU meters. Sample rates of up to 96kHz are available at 24-bit resolution. 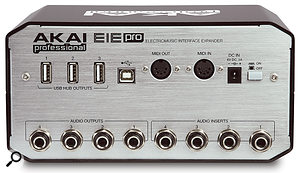 The EIE Pro's rear panel features four audio outputs and four audio inserts on quarter-inch sockets, three powered USB ports, a USB B port for connection to your computer, MIDI I/O sockets, an input for the external power supply and an on-off switch.

Out of the box, the retro stylings and sturdy construction become obvious. The case is solid, the controls feel positive, and the colour scheme and materials are cleverly co-ordinated to mirror current trends in computer design.

On the front panel, all the important controls are immediately accessible. The four 'combi' connector inputs can be individually switched between mic/line and guitar level, while phantom power is separately switchable for input pairs 1/2 and 3/4. Given the recent resurgence in popularity of ribbon microphones, which may not be happy with phantom, this is a neat move that outsmarts other competitors at the price point. Throw-switch operation goes even further to ensure that phantom power is only applied when required, and contrasts favourably with the 'soft' push switches of similar devices. (One of the throw switches on the review model was a little tough to operate, but should loosen up with continued use). The ability of all four inputs to work at guitar level is also quite a rarity, and will surely appeal to those who like to record multiple guitar and bass parts 'straight in'. Being able to have both a guitar and bass plugged in while also tracking a couple of vocal microphones is another significant selling point. The preamp doesn't include a sensitivity pad or high-pass filter, but neither would typically be expected at this end of the audio interface market.

Beneath the glow of the VU meters, switches are provided to select the input or output pair being metered. Next to these, a master output-level control is provided, along with a mono/stereo switch. This is handy both for checking mixes for mono compatibility and creating a mono headphone mix when monitoring inputs at source (otherwise inputs appear to be panned hard left and right while you're recording). A single headphone output is provided here, with a switch to select the source to be monitored. Finally, a Monitor In/Out control is used to set the balance between inputs monitored at source and output (playback) level. This simple, yet effective approach provides zero-latency monitoring and follows a trend most readily associated with the original Digidesign M-Box interfaces. Notably, when recording is finished, this control needs to be set to maximum level ('out'), as otherwise it attenuates the output level monitored by the VU meters.

The rear panel is home to the balanced jack outputs, insert points, MIDI I/O connections and a three-way USB hub. There ought to have been sufficient space here to also include a second headphone output — perhaps just a duplicate of the first. This could be considered quite an omission, given that the four input channels open up a number of possibilities beyond a one-man-band affair. The EIE Pro also dispenses with any form of digital connection on the back plate. This is not surprising, given that the unit is designed to be an all-in-one recording solution that provides good connectivity with external equipment via its array of analogue socketry. While digital connections are invariably handy for additional inputs, they usually come at the expense of limiting the number of simultaneous analogue inputs available, which in this case would be at odds with the product's concept.

The interface is powered by an external power adaptor, and while an internal supply would have been ideal, it would, no doubt, have added cost and weight. A flick through the Quick Start Guide reveals that the unit is not intended for rackmounting, and I feel that Akai may have missed a trick in this respect. The 'Pro' badging of the unit, the provision of insert points and lack of bus powering all make it an ideal candidate for rackmounting alongside other professional external units. A rackmount kit, and perhaps even a range of external processors that utilise the same size of case, would surely represent attractive 'add-on' options for the satisfied EIE owner. 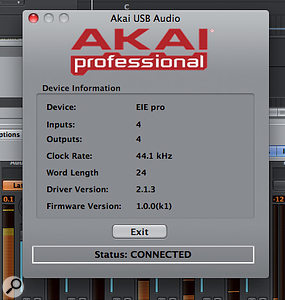 The EIE Pro Panel software displays the current status and configuration of the audio interface, including bit depth and sample rate. For simplicity, all settings are controlled directly from within the DAW or system sound preferences.

Setup is incredibly simple and involves the installation of a driver from the supplied disc, followed by connection of the interface using the provided USB cable. While similar devices rely on elaborate software 'consoles' and control panels, the EIE Pro installation includes only a modest 'status' panel that displays current settings and would just be required for occasional reference. I was up and running in just a minute or so and proceeded to install the Cubase LE (v5) software bundled with the interface, in preparation for capturing a few test recordings. An Akai Professional edition of Ableton Live Lite is also bundled with the unit.

During a recording session, operation is a straightforward and tactile experience. When you're flipping switches and setting gain, it really does feel as though you're operating a high-end vintage outboard unit, and there is a certain feel-good factor associated with this. No instructions are required to get up and running, in my opinion, since the layout of the controls is highly intuitive. All technical configuration — sample rate, bit depth and buffer setting, for example — can be freely controlled using the audio preferences within your digital audio workstation.

Using Cubase, I captured some acoustic guitar and accordion parts using a selection of condensers and an inexpensive ribbon microphone. The lowest buffer size of 64 resulted in an acceptably short latency time, so I was able to monitor through the software (Monitor control turned fully to 'Out' position) with an added reverb send while recording; using two inputs, the interface coped effortlessly with these demands. The preamps offer a good deal of gain, and seem relatively noise-free, even when boosted to maximum level (some 51.5dB) to accommodate for the low sensitivity of my ribbon mic. The EIE Pro's headphone amplifier delivered a sufficiently strong signal to drive my high impedance (600Ω) cans, so volume at lower impedance ought to be plentiful. 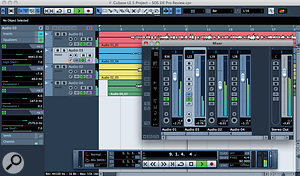 Recording tracks using the bundled Cubase LE software. Once the audio interface is selected and all inputs/outputs are enabled, Cubase handles audio recording and editing with ease. This version supports up to 48 audio tracks, 64 external MIDI tracks and 8 virtual instrument tracks; processing functionality can be easily expanded by downloading freeware third-party VST plug-ins.Initially, when I was setting and monitoring levels, force of habit kept me glued to the software meters on screen. However, things soon changed when an unexpectedly aggressive accordion chord caused the VU meters on the EIE Pro to clip for the first time. They're normally illuminated in tasteful white light, but each meter changes to red illumination when its corresponding input or output clips (depending on what is being metered). Despite my initial shock — and the dimly lit room resembling a lacklustre disco — this feature proved incredibly valuable while I was recording and playing at the same time. My attention was drawn away from the minute detail on screen, and instead any further clipping would be flagged up by a red light being spotted out of the corner of my eye. This is really conducive to producing better takes, dispensing with the visual clutter of the computer screen, and it would also be useful for helping you to keep an eye on levels when moving microphones further away from noisy fans and hard drives.

In further tests, I made use of the MIDI input to trigger a range of sampled instruments within Logic Pro. An even smaller buffer size of 32 samples was achievable here, and instruments were triggered and played back without any undesirable clicks, pops or noticeable latency throughout the session.

Far from considering it a gimmick, I found that the powered USB hub worked well throughout the recording session to mount and power a pen drive and a portable hard drive. It would be a useful location for tucking away copy-protection devices for plug-ins and represents a huge expansion in USB connectivity for notebook users like myself.

The Akai EIE is an incredibly well-specified audio interface that looks and feels far more expensive than its modest price tag would suggest. It's simple to operate and, with minimal configuration, is capable of yielding excellent results from the outset. Shortcomings are few and far between, although the single headphone output could prove a problem for some potential buyers. In short, the EIE Pro is a joy to use; a thing you could really grow to love!

The Tascam US600 and M-Audio Fast Track Ultra are probably the closest to the Akai in terms of specification and price. These alternatives offer great value for money, and in some respects more impressive feature sets. For example, both interfaces feature digital connections, and the Fast Track features six analogue outputs and dual headphone sockets. However, there is something distinctly alluring about the design and function of the EIE Pro. The VU meters, the full complement of insert points, sensible paired phantom-power switching, multiple guitar inputs, rugged construction and USB hub move this unit ahead of the competition on a number of counts, in my opinion.

A retro-styled, robust audio interface that offers excellent analogue input/output and MIDI connectivity at an attractive price. The simplicity of installation and operation will appeal to users wishing to get up and running with minimum fuss. Highly recommended.