Looking for a compact controller keyboard costing not much more than a bag of chips? Look no further... 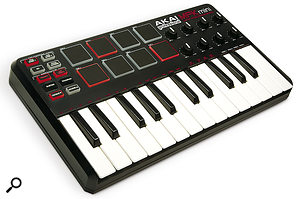 The Akai MPK Mini 'laptop production keyboard' is the third member of Akai's MPK family of USB MIDI controllers to be featured in the pages of Sound On Sound. We began with the neat and tidy, medium‑sized MPK49 (SOS February 2008), progressed to the impressively compact MPK25 (SOS October 2009), and now find ourselves presented with the really, seriously, all‑joking‑aside, very, very small MPK Mini.

While the MPK25 managed to squeeze a couple of octaves' worth of full‑size keys into a device only a few inches wider and deeper than an average laptop, the MPK Mini adopts a more radical approach to space‑saving, eschewing full‑size keys in favour of miniature ones, resulting in an overall desktop 'footprint' of just 6x13.6 inches. That's a couple of inches narrower than the average laptop, with the whole of the MPK covering just the QWERTY keyboard part. Small, in other words.

Installation is simple. The keyboard is properly plug‑and‑play and requires no special drivers to be installed. Windows and Mac OS are supported, and a software patch editor (see below) is supplied for both. Minimum system requirements aren't specified, but any relatively recent computer should be OK. The device is powered via USB, and attaches to your computer with the supplied USB cable (with a standard, flat 'A-type' plug at one end, and a mini 'B-type' at the other). The keyboard has no power switch, and is automatically 'on' as soon as it's connected. A brief, 10-page, manual is included in PDF format on the installation disc.

At first glance, the MPK quite closely resembles its larger brethren. Constraints of space (and no doubt cost) mean there's no LED display, and neither are there pitch‑bend or modulation wheels. However, there are the familiar MPC‑like drum pads, and there are eight assignable knobs, just like on the larger MPKs. Well, more or less.

The percussion pads are velocity‑sensitive, and made from thick, heavy‑duty rubber, with black, slightly matte‑feeling faces and translucent sides that are illuminated by backlights when a pad is struck. They're just large enough to accommodate two index fingers side‑by‑side, to play simple 'rolls'. I suspect that, due to cost constraints, these aren't identical to the pads on the larger MPK controllers, but they're very playable nonetheless, and rival the pads on some controllers costing quite a bit more than the MPK Mini.

The unit's 10 remaining buttons are made from the same material as the pads, and are also backlit. They consequently feel reassuringly rugged and are easy to see even in low lighting conditions.

The eight knobs are all standard pots — there are no endless rotary encoders. The caps of the knobs are made from a lightweight plastic which, despite an embossed pattern of ridges, felt slightly slippery to me. The knobs are also not very tall, standing slightly less than a centimetre proud of the top panel. This is good in that they're much less susceptible to damage in transit, which might otherwise be a concern, since they don't feel quite as robustly attached as one would ideally like, but it also makes them a bit fiddly and difficult to get a hold of. They're also quite closely spaced, so if there are two parameters you want to be able to tweak simultaneously, you'd be wise not to assign them to adjacent knobs — although, to be fair, this is true of some larger controllers too.

The miniature keyboard is somewhat reminiscent of the tiny, battery‑operated Casio home keyboards many of us will have grown up with. The comparison is not altogether fair — the MPK is more sturdily put together, and its keyboard is velocity sensitive — but there are similarities: the keys have a lightweight and springy feel, and the keyboard is small enough to feel cramped for anyone with large-ish hands. The keyboard spans three octaves, although a pair of Octave up and down buttons can be used to shift the effective range up or down by four octaves in either direction. 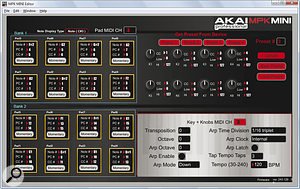 The MPK Mini's editor software can be used to edit and create presets and to set arpeggiator functions.

The MPK Mini can store four different presets, each one being a record of the parameters (MIDI CCs or Program Change messages, for example) assigned to the different controls. To edit or create new presets, you need to use the software editor supplied. This provides a clear and easy‑to‑understand visual representation of the device's inner workings, where settings can easily be made and adjusted. Presets can be loaded from and saved to files on your computer, and sent to and received from the keyboard via USB.

A group of top‑panel buttons changes the mode of the eight drum pads. 'Pad Bank 1' and 'Pad Bank 2' allow you to switch between, by default, two banks of eight assigned MIDI notes, for triggering samples or other instrument sounds. When 'Prog Change' is activated, two banks of eight Program Change messages are available, and when the 'CC' button is lit, two banks of eight Continuous Controllers can be accessed. Note, Program Change and Continuous Controller numbers can easily be assigned to each pad (in each of the two banks) with the supplied software editor, in an at‑a‑glance view of all assignments. In the editor, you can also adjust the behaviour of each pad (in each bank), choosing between either 'Momentary' (normal drum pad behaviour) or 'Toggle' (the pad becomes a latching on/off switch).

Beneath the pad mode buttons is a pair of buttons for controlling the MPK Mini's built‑in arpeggiator: one to switch it on and off, and a Tap Tempo button to manually set its tempo. Further settings are made via the software editor. The arpeggiator can be set to use its own internal clock, or to sync to an external source (the sequencer of a DAW application on your computer, for example). Arpeggio resolution can be set to quarter, eighth, 16th and 32nd note durations, each with triplet variations, and the arpeggiator can generate patterns in several different modes: Up (notes are played from lowest to highest); Down (from highest to lowest); Inclusive (lowest to highest and back again, with lowest and highest notes retriggered at either end of the run); Exclusive (like Inclusive, but the highest and lowest notes are not retriggered); Random (a random sequence); and Order (notes are played in the order in which they were held down on the keyboard).

There are several low‑cost, miniature USB controller keyboards on the market at the moment, aimed at the budget‑conscious user who wants a MIDI controller that's extremely portable and economic in its use of space. The MPK Mini probably offers more, in terms of options and flexibility, than anything else in the same size and price bracket. Its arpeggiator is an additional bonus, and not one you'd necessarily expect in a controller at this price. Its miniature keyboard will not appeal to everyone, however, and some may bemoan the absence of pitch‑bend and modulation wheels. The eight assignable knobs are potentially very useful, but I think the caps could really do with being a fraction taller and a little less slippery.

The drum pads are where the MPK Mini really comes into its own. They're sturdy and quite playable, and feel as if they must have been borrowed from a more expensive controller. If drum or percussion programming is your first priority, and you need something small, cheap and portable, you're unlikely to find anything much better than the MPK Mini.

The MPK Mini doesn't have many direct competitors. Korg's Nano Key and Akai's own LPK25 are cheaper and even smaller, but lack the assignable knobs and pads. Alesis's Q25 lacks them too, but makes up for it with larger keys, and proper pitch‑bend and modulation wheels.

The MPK Mini strikes a good balance between price, size and functionality. There's not much else on the market offering quite so many features in quite such a small package, quite so affordably.