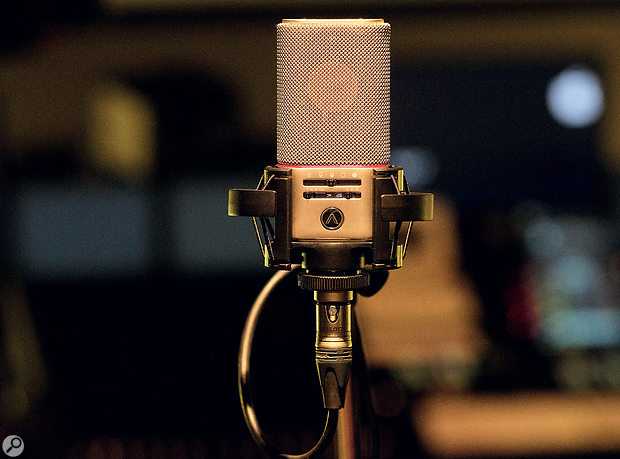 Austrian Audio may be a new name, but their first mics have an unrivalled pedigree. Are these the true heirs of AKG's classic C414 EB?

When studios embraced phantom power and moved away from valve microphones, two large-diaphagm capacitor mics became ubiquitous. Versions of both are still in production: but whereas the Neumann U87 is still recognisably the same mic today, AKG's C414 has been through numerous redesigns.

Each iteration of the 414 has improved its technical specifications, but many would argue that something more valuable has been lost along the way. The current C414 XLS may boast state-of-the-art self-noise figures, LED indication of polar pattern and other mod cons, yet it's the very early C414s that fetch astronomical prices on the second-hand market. The reason lies with the core component that defines a microphone's performance: its capsule.

Originally developed for the C12 and used in early versions of the C414, AKG's 'brass ring' CK12 was an engineering marvel that has been described as the most complex microphone capsule ever produced. Like most large-diaphragm capsules, it was based on the Braunmühl-Weber principle, generating its cardioid characteristic from an acoustic labyrinth formed of a series of circular backplates with holes drilled in them. However, AKG's complex and innovative implementation of this concept gave them more independent control over the pressure and gradient components of the sound than was available in the classic Neumann large-diaphragm capsules. A well-tuned 'brass ring' CK12 thus offered excellent frequency response characteristics both on- and off-axis, among many other good qualities.

Unfortunately, there was a down side to this sophistication. Entirely handmade, the capsule was labour-intensive, inconsistent and difficult to manufacture, with a high rejection rate — I have been told the entire factory typically produced only one CK12-based mic a day. Eventually, AKG became so frustrated by the challenges of producing the 'brass ring' version that they replaced it with a different design, visually identifiable by the use of a white plastic ring around the outside. This change took place more than 40 years ago, and since then, numerous different capsule designs have appeared in successive generations of C414s. As far as many audio engineers are concerned, however, the original remains the best.

Like many sought-after vintage items, the CK12 has attracted cloners and modern boutique manufacturers. A few of the latter, notably Tim Campbell of Campbell Transmitter, have succeeded in creating excellent CK12-alikes, but they are still handmade in small quantities and thus not a viable option for use in mass-market mics. Meanwhile, Far Eastern factories churn out capsules that look outwardly like the 'brass ring' CK12; but, internally, most are copies of the simpler Neumann K67 design and don't sound like CK12s.

Several years ago, a group of AKG's own engineers embarked on a research project in their spare time. The idea was to revisit the CK12 design and create a new capsule which had the same sonic virtues, but could be manufactured more consistently. They measured the best-sounding CK12s they could find and investigated alternative materials and techniques that would enable those characteristics to be reliably reproduced.

At the same time, however, the company's owners decided that their priorities lay elsewhere, and chose to transfer mic production away from its traditional home in Vienna. More than 20 of AKG's core engineers found themselves without a role. They responded by establishing a new company called Austrian Audio to complete their research into the CK12 and develop a new range of microphones. Two years after the company was incorporated, the first of these have at last come to market, and expectations are high. 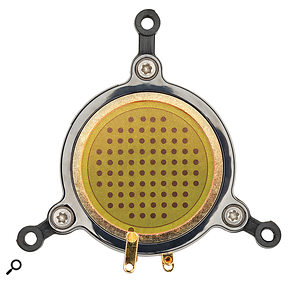 Austrian Audio's CKR12 capsule employs the same sophisticated backplate design as the 'brass ring' AKG CK12 — compare the pattern of holes visible in this photo — but can be manufactured much more consistently.The initial product range consists of two large-diaphragm capacitor microphones, both entirely manufactured in Vienna and based on Austrian Audio's new CK12–inspired capsule. The black OC18 has a fixed cardioid polar pattern, while the silver OC818 offers multiple polar patterns, plus some interesting additional features which I'll come to in a minute. Both mics incorporate a pad with -10 and -20 dB settings: the former is implemented by reducing the polarisation voltage to the capsule, to protect the internal electronics from overload, while the latter reduces the output gain to protect downstream devices. A high-pass filter is also built in to both models. Engaged at 40 or 80 Hz, this operates at 12dB/octave for removal of unwanted subsonic content; in the third position, the 12dB slope is operational below 80Hz, and there's a gentler 6dB/octave roll-off between 80 and 160 Hz to compensate for proximity effect. 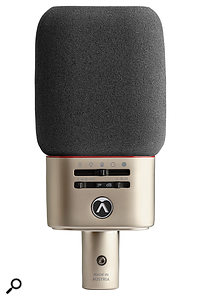 The silver OC818 (above) and black OC18 employ the same shell, but in different colours, with the fixed–cardioid OC18 lacking a pattern control. Both models here are sporting the foam windshields. 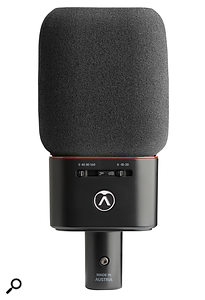 The all-important backplates in Austrian Audio's CKR12 capsule are closely modelled on those of the CK12, and it too is handmade, but it also incorporates some intriguing innovations. The most obvious visual change is that the iconic brass ring has been replaced by a black ceramic surround. This apparently enables the capsule to be manufactured more consistently, and is also comparatively immune from changes in temperature and humidity. And, whereas the original CK12 was fixed to a conventional pedestal-type mount, the CKR12 is suspended from three flexible rubber grommets. These serve as an internal shockmount, and the removal of the pedestal helps minimise undesirable reflections within the headbasket.

Talking of headbaskets, Austrian Audio have found room for improvement here, too. The distinctive square C414 headbasket was formed of two separate grilles mounted either side of a central frame, from which the lower half of the body was also removable. This arrangement didn't always form the most effective Faraday cage, meaning that the 414 could become susceptible to RFI; Austrian Audio have dealt with this by manufacturing the body as a single piece. The black OC18 and silver OC818 thus look less like C414s and more like expensive hip flasks. It's a distinctive visual aesthetic and a very classy one.

The review mics were supplied with a simple clip that holds the 'stalk' at the base of the mic. A spider mount will also be available, but many third-party mounts won't be usable with the OC mics owing to their unusual shape. The elastic capsule mounts do provide a degree of shock protection, but not as much as something like a Rycote InVision mount.