All CKR12 capsules are closely matched, so it should be possible to use any two mics as a stereo pair (although, obviously, they'll both need to be 818s if you want to use them in stereo configurations that require two non-cardioid patterns). Both models require 48V phantom power, and consume a maximum 3.5mA. They have transformerless outputs with a nominal impedance of 275Ω, and self-noise is specified at 9dB SPL (A-weighted). Sensitivity in cardioid mode is given as 13mV/Pa, and is fractionally higher in the other patterns.

In the multi-pattern OC818, a microprocessor-controlled analogue circuit is used to deliver very precise polarisation voltages to the diaphragms, ensuring that the polar patterns are perfectly consistent. There are no LEDs here: cardioid, omni, figure-8 and hypercardioid patterns are selected using a physical switch, with the advantage that you can tell which one is chosen even with the mic not powered up. In the cardioid setting, a short adaptor cable can be plugged into a mini-XLR socket at the back of the mic to extract the output from the rear side of the capsule as a separate signal. By recording both front and back signals to a stereo track in your DAW, you can then use AA's PolarDesigner plug-in to decode the polar pattern of your choice after the fact (see box). Something to watch out for, though, is that the adaptor cable tends to foul the mic clip, and for this reason I usually used the rear side of the mic as the front in this configuration. 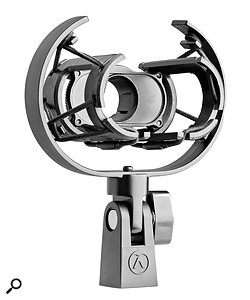 The OC818 and OC18 Studio Sets will include this spider mount as well as the simple clip that comes in the Live Sets.The pattern switch on the mic also has a fifth setting, in which control is handed over to a Bluetooth dongle that can be plugged into the rear socket. Doing so allows you to use an iOS or Android app called PolarPilot to vary the polar pattern through any one of 255 iterations from omni to figure-8, and also to change the pad and filter settings remotely. You need to enter the serial number of each OC818 that is dongled up, whereupon they can be named and managed separately within the app. A meter lets you check whether the mic's internal electronics are clipping, and this is operational even when remote pattern control isn't selected on the mic.

I tested the review mics on a wide range of sources, including electric and acoustic guitars, violin, male and female vocals, and on drums, both as overheads and snare and kick-drum close mics. Many of these are sources where I'd usually use my 'brass ring' AKG C414 EBs, and where possible I put these up alongside the Austrian Audio mics. However, it's important to note that the OC mics are not indended as recreations of the C414. Austrian Audio naturally referred to many existing mics during the design phase (especially the C12, as I understand), but it might be more accurate to say that these mics attempt to show what can be done with the same classic capsule using modern electronics and manufacturing techniques.

After all, in the design of capacitor mics, everything else is secondary to the capsule. It might be possible to achieve a frequency response that looks flat on paper with the aid of clever circuit design and heavily smoothed measurements, but if the capsule is below par, the sound will fall apart as soon as you move off axis, or apply any equalisation; and that 'flat' frequency response will conceal narrow peaks that can't be removed after the fact. Austrian Audio are quite right to emphasise the importance of the capsule, and, in use, it's immediately apparent that their claims about the CKR12 are justified.

These are beautifully clean mics with a supremely balanced sound. They're not sterile or clinical, but neither do they impose their own 'colour filter' on a recording.

The 'brass ring' AKG C414 is a great general-purpose studio microphone, but it's one with a distinctive sound. Bass is prominent and deep, there's a slightly subdued mid-range, and coloration from the output transformer and other components gives it a characteristic sheen in the treble. It's not a transparent mic, but one that adds its own subtle contribution to any source you pass through it. By contrast, the Austrian Audio mics are also great general-purpose studio microphones, but in a slightly different way. It's as though every aspect of their design, from the transformerless electronics to the very open headbasket, has been designed to present the CKR12 capsule's output in the purest possible light. Off-axis frequency response and pattern consistency are even better than on the 414, while the on-axis sound is clear and free from obnoxious resonances. To my ears, the on-axis frequency response is fuller than that of the C414 EB: the low bass has been reined in a bit and the top end is open and relaxed rather than sizzly. The plot I've seen suggests that there are gentle peaks in the cardioid-pattern frequency response at 5kHz and 12kHz but subjectively, I didn't find myself thinking of these mics as 'bright'. The mid-range is richer and more present than on a 414, especially below 1kHz, but it's not boomy, nor forward as on some Neumann mics for instance.

In short, then, these are beautifully clean mics with a supremely balanced sound. They're not sterile or clinical, but neither do they impose their own 'colour filter' on a recording. If something sounds wrong, you can be confident that the problem lies with the source rather than the microphone; and if you do want to lift the top end using EQ, you need have no fear of things getting harsh. And they're as happy capturing whispered vocals and fingerstyle guitar as they are on screaming singers and close-miked kick drums.

Microprocessor control in the OC818 opens up interesting possibilities, and the ability to record both capsules has obvious benefits, with PolarDesigner allowing you to go way beyond conventional pattern selection. Ultimately, however, these are secondary features, because innovations of this sort are worthwhile only if they build on the right foundation. What really matters is the core sound of the mic, and Austrian Audio have used their traditional electro-acoustic expertise to create something a bit special here. Their achievement is even more impressive considering the price at which they've brought these wholly European-made mics to market, with no hint of compromise in the design, the build quality or the sound. The OC18 and OC818 aren't just great microphones for the price: they're great microphones, period.

Probably the most direct competition comes from Lewitt's LCT range, which also boasts an AKG-related heritage and features models that allow the rear capsule's output to be recorded independently. AKG's own C414 XLS is another obvious alternative, and to my mind, the Austrian Audio mics also compete on quality with more expensive models from other manufacturers.

Austrian Audio's open-source PolarDesigner plug-in is available as a free download from their website, in all the usual Mac OS and Windows native formats. It's intended primarily for use with the OC818, but should work with any microphone that allows back–to–back cardioid capsules to be captured separately — obvious candidates include the Lewitt LCT 640 TS, Sennheiser MKH 800 Twin and Pearl ELM-A, as well as the Townsend Labs Sphere modelling microphone. In fact, the functionality of Polar Designer overlaps to some extent with that of the Sphere system's plug-ins, though there is no attempt here to model the characteristics of other microphones. 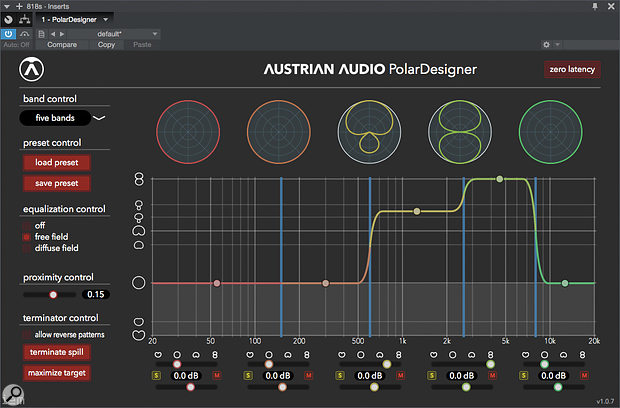 The PolarDesigner plug-in allows the signal to be divided into up to five frequency bands using linear-phase crossovers, whereupon the polar pattern can be specified separately for each band.

The OC818's polar pattern is already near–continuously variable between figure-8 and omni, courtesy of Bluetooth control, but the PolarDesigner plug-in takes this several stages further. It allows the signal to be divided into up to five frequency bands using linear-phase crossovers, whereupon the polar pattern can be specified separately for each band. And if that feels too much like hard work, you can use the 'terminator' control to automatically choose polar patterns either to maximise pickup of a wanted source, or minimise pickup of an unwanted source. Finally, EQ settings allow you to apply high-frequency lift appropriate to free-field or diffuse–field use, and to exaggerate or attenuate the bass tip-up resulting from proximity effect — this last appears to be a straightforward EQ band, and changes the tone of near and far sources equally.

With only two capsules, the OC818's directionality can't be freely steered like that of an Ambisonic mic, but PolarDesigner does nevertheless open up useful possibilities. For example, when you're using the OC818 as a snare mic, spill from the hi-hat is most apparent at high frequencies, so you can set the upper two frequency bands to be figure-8 to maximise rejection of the hi-hat whilst keeping the pattern more open in the mid-range. This was pretty much the setting that the 'terminator' control came up with when I fed it some hi-hat spill and asked it to maximise rejection; as far as I can tell, this is how you're supposed to use it, though there's currently no documentation, nor any guidance as to how much audio it needs to hear in order to 'learn' where the spill is coming from.

In the OC18 and OC818, Austrian Audio have combined old-school expertise with clever innovation to deliver really special large-diaphragm studio microphones at a compelling price.