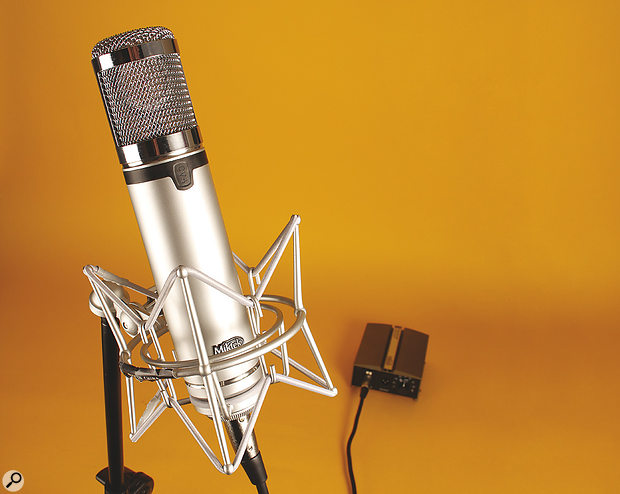 Nashville-based Miktek shouldn't be short of chances to test their mics — but how did they fare in their first ever SOS review?

I'd imagine that, being based in Nashville, Tennessee, Miktek had no shortage of places to test their CV4 large‑diaphragm valve condenser microphone before they finalised the design and put it into production. Their design aim was to produce a valve mic that sounded big and warm, while also being airy and smooth at the high end. So what can make a microphone sound like this? Obviously, the capsule plays a large part in the sound of any microphone, but the quality of the electronics, and particularly the output transformer, also has a significant influence.

The CV4 utilises Miktek's own MK9 capsule, a dual‑membrane, one‑inch capsule, skinned with five‑micron Mylar, onto which is evaporated a 0.4‑micron layer of gold. Miktek pride themselves on the precision with which they machine and assemble their capsules, including the critical diaphragm‑tensioning process, but they also stress the importance of the AMI BT4 transformer built for them in the US, which they say delivers a classic sound with the extended low‑frequency response associated with the best vintage valve microphones. For amplification, the circuit uses a NOS (New Old Stock) Telefunken EF800 valve.

While the mic has vintage leanings, the power supply looks very modern and is built into a tough aluminium extrusion with switchable 110V/230V input settings. This links to the mic using the included seven‑pin XLR cable, and a rotary control on the PSU allows the user to select from nine polar patterns, all the way from omni, through cardioid, to figure‑of‑eight. There are no pad or LF roll‑off switches on the mic or the PSU.

According to Miktek, the CV4 is ideal for recording single vocalists (it doesn't say how it fares on married ones!), and is also well suited to recording acoustic instruments such as piano, string ensembles and winds. Additionally, they recommend it for use as overheads on a drum kit, for ambient room miking, and for recording vocal ensembles.

Miktek hand‑build the CV4, using components sourced from multiple locations in the US, Europe and Asia. Testing is done in Nashville, where each mic is packed with an individual frequency‑response graph. The mic comes in a wooden box with a simple swivel‑mount, and this is packed inside an aluminium 'camera' case with the power-supply unit, mains cable, the aforementioned seven‑pin XLR cable and a wire‑frame elasticated shock mount. There's also plenty of practical user information in the manual, including suitable miking techniques for common instruments and vocals.

Constructionally, the microphone follows classic lines, with a cylindrical body finished in satin silver, a chromed basket, a couple of tasteful trim rings, and a company logo on what is the 'hot' side of the mic when it's used in one of the cardioid modes.

Internally, the mic looks robustly engineered, and the output transformer appears rather more substantial than those of many other tube microphones. All the circuitry is mounted on two printed circuit boards, high‑quality capacitors and metal‑film resistors are used, and the ceramic valve-base is mounted in resilient rubber, to isolate it from vibration. Everything appears to be hand soldered, and connections to the valve base are made with PTFE coated wire, which has extremely good insulating properties — as well as the benefit that the coating doesn't melt when you solder the joints! 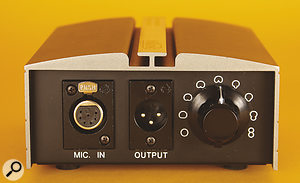 The CV4's power supply doubles up as the polar-pattern selector.The manual's generic frequency response graph shows the mic to be flat within a couple of decibels up to 5kHz, and above this there are a few little wrinkles before the response starts to drop away above 10kHz, being about 3dB down by around 15kHz and some ‑10dB by 20kHz. The quoted frequency response is 20Hz to 20kHz, but as no limits are specified, this doesn't really mean much on its own. The graph is far more informative, and the individual plot supplied with the mic showed the high‑end response to be more extended than the 'typical' curve printed in the manual.

The shape and position of the wrinkles at 5kHz and above changes depending on the polar pattern that's selected, but all are fairly subtle, and there's no suggestion of a deliberate presence peak. These small variations are probably caused by the acoustic effect of the basket and metal bodywork rather than the capsule itself.

Sensitivity is a fairly typical ‑35dBV/Pa, and the self-noise is specified at 16dB SPL which is, again, fairly typical for a valve mic. The maximum SPL is rated at 133dB, so most sound levels can be accommodated without the need for a pad. Because of this mic's extended low‑end response, essentially flat to below 20Hz, a low‑cut filter may be needed on the preamp, especially if you're working up close in cardioid or figure‑of‑eight modes, both of which exhibit the expected proximity bass‑boost. 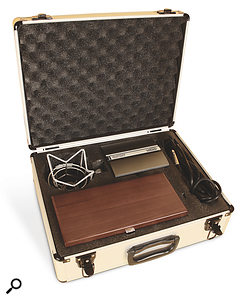 The CV4's wooden box nestles in a hard case that also houses the PSU and included accessories.

I set up the Miktek CV4 alongside my own AKG C12VR, just to provide me with a familiar reference point, and a Violet Garnet, another valve mic that also happened to be on test at the same time. I captured some audio files during the tests, which you can hear at /sos/may11/articles/miktekcv4media.htm. Having found my C12VR to have far more low end than just about any mic I've tried alongside it, I decided to engage its low-cut filter (in the steeper of the two modes), as that seems to deliver a far more usable sound, as well as making a better reference for other mics.

On voice, all three mics worked extremely well, though I really liked the CV4's tonal balance and clarity. It sounded neutral and accurate, but with a bit of flattering magic added behind the scenes, albeit not enough to give the game away, and there was certainly no trade‑off in smoothness or detail. The sense of detail also shone through in the tests on acoustic guitar and hand percussion, where the mic responded well to the instruments' lively sound. On electric guitar, all three mics sounded generally similar, but with some differences evident at the top end. There was no better or worse mic in this case, as all three mics produced great results, the difference between which would be a matter of interpretation and individual taste.

The general tonality of the CV4 is fairly consistent between patterns, although the extra room ambience in omni and figure‑of‑eight modes makes the sound seem more ambient. Similarly, the lack of proximity effect in omni mode can make this mode seem a little thin when compared with the other modes on close‑up sounds, but then that's true of pretty much any multi‑pattern mic.

At $1299 in the US [European pricing had yet to be set at the time of going to press — Ed], the CV4 isn't a budget mic, but it certainly costs a lot less than buying a 'classic clone' and it performs supremely well, not just on voice, but on pretty much anything you point it at. I like its combination of warmth and non‑aggressive detail, the fact that it is well made, and the versatility it offers by throwing multiple patterns into the bargain. This is definitely a mic to add to your shortlist if you want a single, good‑quality mic that can turn its hand to anything without making you spend an inordinate amount of cash.

The Violet Designs Garnet I was testing at the same time as the CV4 sounds quite similar, if a little more polished — but it costs rather more — whereas the MXL Revelation turns in a great performance for a little less cash. Also consider SE Electronics' Gemini 5 and Rode's K2 and Classic MkII.

The CV4 is good-sounding and versatile mic that can hold its head up in the company of more expensive models.