Change For The Better

Once you have made a selection, SLP6 provides you with all sorts of options for transforming that selection. Audio can, of course, be cut and pasted between layers and, on playback, you can solo/mute layers as required. This is useful as you go through the inevitable iterative selection process of trying to isolate a specific element within a complex audio recording.

Continuing the parallels with image editing, the left-side toolbar includes options for erasing, amplifying, cloning, repairing, drawing, panning around the display and zooming, although the behaviour of some of these (for example, Repair Frequency Noise Spray, Spectral Marker and 3D tools) is obviously tailored for the audio context.

As in image editing, you can also move and resize selections. This is mind-bending stuff and the ability to, for example, move, compress or expand a selection up or down to change its pitch properties, or left and right to modify its timing or playback speed, has obvious potential both in sound design and music editing. There are also clear musical applications for things like the Amplifier tool, which lets you easily 'paint' an increase in volume onto specific elements of the spectral display if you need to do micro-scale edits such as bringing an individual bass drum hit up in level. Rather oddly, though, this tool can only add gain: if you want to do the opposite, then you need to visit the Process/Amplitude dialogue, where you can set a negative gain value. It's also worth stating that SLP6 retains its built-in tools for performing tasks such as noise reduction and reverb reduction. The latter is an interesting process and, though it's primarily intended for dealing with unwanted room ambience in location-recorded dialogue, there is nothing to stop you experimenting with it if you need to rescue other types of audio where the reverb treatment has been overcooked.

Thanks to ARA2, SpectraLayers Pro 6 feels just like an integral part of your DAW.

When working in the stand-alone version of SLP6, you can now open either a layer or the current selection, in an external audio editor for more conventional waveform editing. You can define paths for up to three external editing applications within the Preferences dialogue, which can then be selected from the main Edit menu or using a keyboard shortcut when required. This worked smoothly with both Wavelab Pro and Sound Forge Pro on my test system. Once you initiate a 'save' process in your external editor, SLP6 simply imports the edited audio. Usefully, any selections are retained throughout and SLP6's undo feature seems to cope happily with externally edited audio should you wish to step back from any external editing.

Perhaps the most significant new feature added to SLP6 is integration in the other direction: it can now operate as an ARA2 extension in a suitable host. While this does not add new editing functionality, it really does feel like a paradigm shift for making practical use of spectral editing in a music production context. 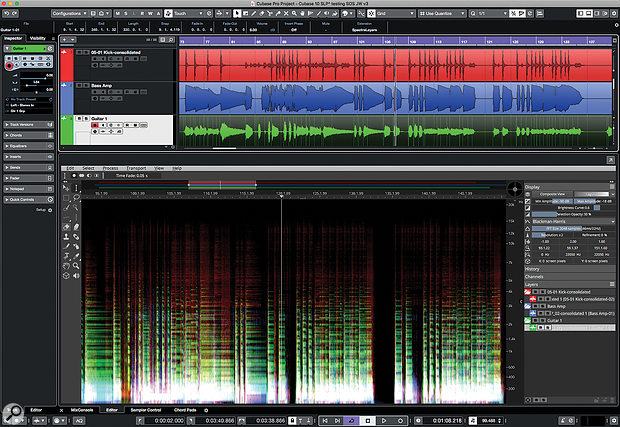 Opening a clip in SLP6 simply requires you to select the required audio clip and then choose Audio / Extension / SpectraLayers. SLP6 then appears within the Cubase Lower Zone, giving you access to the full set of SLP6 menus, tools and sub-panels. And, yes, you can select multiple clips and apply the extension to all of them as a single operation. The clips then simply appear as separate layers in SLP6 that are, rather wonderfully, colour-coded as per the Cubase Project window. All the layer-based operations possible within the stand-alone version of SLP6 seem to work just as well via ARA2, as does SPL6's own History panel if you need to undo an edit or three. The ARA2-based approach makes spectral editing within your DAW a more practical proposition and also a much more powerful one. Even some simple examples illustrate that enhanced potential.

For example, as it's now easy to work with SLP6 on your individual audio tracks right from the mix preparation stage, you can carry out noise reduction on a guitar amp recording or reverb reduction on a vocal tracked in an untreated room just as easily as using conventional plug-ins.

Perhaps more intriguing is the option for using spectral editing as an alternative to 'ducking' through conventional side-chained compression. A typical situation might involve using a compressor to duck a bass guitar by a few dB where the compressor is triggered via a side-chain input from the kick-drum track. Continuing the image-editing comparison, the parallel lies in creating an image mask (a selection with a specific area and shape) from one layer to hide or process another layer. In an audio context, a selection mask might be created from the spectral image of the kick-drum track which is then 'cast' (SLP6 terminology,meaning the selection area is overlaid) onto the spectral data of the bass guitar track, allowing you to visualise the exact frequency overlap between the two sound sources. Once the cast is in place on the bass guitar spectral layer, you could, for example, reduce the amplitude of only the bass guitar's spectral data that lies under the cast (mask) by a few dB, allowing the kick to pop through in the mix where the two sound sources are competing.

The 'casting' process enables some interesting mix options — as here, where a cast is being made from a kick-drum track that will then be used to reduce the amplitude of the bass guitar track where there is spectral overlap between the two.

The process is more time-consuming than using conventional side-chain compression, because you have to manually create the selection mask from the kick-drum track, but it offers surgical precision and full control over the range of frequencies 'ducked', the length of the ducking and the amount of gain reduction. And it works very well. It also made me wonder about related possibilities, the obvious one being to create a selection mask from a lead vocal track and 'cast' that onto all the instrumental backing tracks to knock out a few dB of all the frequencies that are competing with the lead vocal. You could then perhaps add extra level to the non-overlapping elements of your backing tracks, giving the mix more impact, but with less danger of your lead vocal getting swamped.

I'm sure there are plenty of other possibilities too, and thanks to ARA2, SLP6 feels just like an integral part of your DAW. The ease with which you can perform spectral editing on individual tracks as you prepare sessions or mix them, without having to go back-and-forth to an external editor, undoubtedly means that you're just that much more likely to use it than would otherwise be the case.

Existing users will undoubtedly welcome Steinberg's adoption of SpectraLayers and, alongside the headline changes and additions outlined here, will appreciate the raft of more modest refinements version 6 brings. Spectral editing, while perhaps not mainstream, is already an important tool to some post-production audio editors, sound designers and forensic audio analysts. The implementation of ARA2 support ought to increase its appeal to music producers by removing a significant workflow hurdle in terms of DAW integration. It is still going to be a challenge to persuade this market that the editing capabilities it brings justify the not-insignificant outlay, so I hope that Steinberg will already have plans to promote the potential of SLP6 in all its potential fields of application with video tutorials. This would be both helpful for existing users but also be an obvious means of encouraging potential new users to see how the software might be of benefit to them in their own audio work.

So, is spectral editing about to go mainstream? I'm not sure I can answer that question, but Steinberg are undoubtedly moving things in the right direction. It may still be a specialist tool, but SpectraLayers Pro 6 is impressive nonetheless and, through ARA2, now a much more viable option for music professionals.

The most obvious competitor to SLP6 is iZotope's RX7. This comes in three versions: Elements, Standard (the closest in price to SLP6) and Advanced. All offer very useful noise-reduction options, and the Standard and Advanced editions introduce more sophisticated editing tools for tasks such as music rebalancing, breath control, reverb reduction and dialogue isolation. However, there is currently no layer system or ARA2 support.

A less obvious option would be Audionamix's TRAX Pro 3 (currently Mac-only). Although this is a spectral editing environment, it is primarily targeted as the isolation of melodic or vocal elements within an audio file, and automates some elements of the selection process required to do so, although the task remains a challenge and is very much dependent on the source material, whatever spectral editing platform you use.

Finally, SpectraLayers isn't the only spectral editing environment that can be integrated into a DAW. Magix's Samplitude and Sequoia have spectral editing built in, though there is no layer-based functionality and its capabilities are more limited.