We conclude our tour of the new AIR plug‑ins in Pro Tools 8 with neat tricks for filtered rhythmic gating, creating kick and snare tracks from a stereo drum mix, and widening electric guitars.

Like many of the new AIR plug‑ins, the AIR Filter Gate (top right) has been a revelation to me, and with some simple automation and parameter choice, it can produce stunning effects. 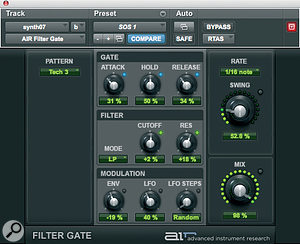 The AIR Filter Gate plug‑in can produce some impressive effects, especially when its parameters are automated (below).

Choose a track with a sustained sound, such as a string pad, and insert the AIR Filter Gate plug‑in, which you will find under the Modulation heading in your plug‑in drop‑down menu. Try some of the presets to get an idea of what it can do: in essence, it is using a gate to chop up the sustained sound, and then applies a filter that can be set to low‑pass, band‑pass, high‑pass or phaser modes. Add in an LFO to provide variation, and it is amazing what this little plug‑in is capable of.

Over on the right‑hand side (see top screen), you can set the rate at which the gate does its chopping, in musical intervals: my favourite is 16th note, followed by eighth note, but I usually extend the release to produce slightly longer pulses. You can use the Mix control to set how much of the unchopped original you want in the mix. Now take a look at the Pattern option on the left‑hand side. This enables you to have your audio chopped according to rhythmic patterns, as opposed to simple tremolo. My firm favourite here is 'Techno 3'.

Once you have a sound you like, try automating some of the controls, starting with Cutoff and Resonance. First, go into Write mode and adjust the Cutoff control to taste, then change to Touch, so that when you let go of a control it drops back to the original setting. Notice that as you are adjusting these controls, a red light next to them indicates that they are automatable.

The AIR Vintage Filter plug‑in (below) is also a neat effect with a few unexpected applications up its sleeve. Instead of using a boring reverb to add some life to a piano loop, put Vintage Filter on an aux track and add a send from the piano loop. Now try setting up the Vintage Filter settings as shown in the screen shot 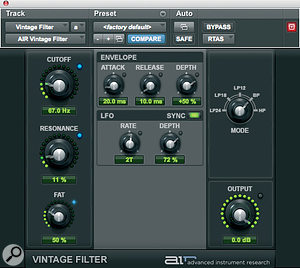 Vintage Filter: an interesting alternative to reverb and delay., and slowly bring up the return fader. What you should hear is an effect that is very hard to describe. It will be adding life and interest to the piano track, but it's not reverb; nor is it conventional chorus or flanging. If you listen to the return on its own (obviously making sure that the send is fed pre‑fade), you will hear a sort of wah‑wah effect, but when this is combined with the dry piano signal in small doses, it adds to the sound in a unique way that some would describe as a vintage chorus effect. It also works in the same lovely, subtle way on guitars, especially acoustics or jazz guitar tracks. Try it! I'm sure you won't be disappointed.

In For The Kill

Have you ever been remixing a track where the drum part consists of a stereo drum loop, and wished you could process the different elements separately? Well, this is a great example of what's possible with the AIR Kill EQ plug‑in. As the name suggests, this is no subtle EQ from the likes of Neve or Flux. This is about getting rid of whole sections of a composite sound, and so is ideal for remixing tracks when you can't get back to the original multitrack.

Take a look at the top screenshot overleaf

Here, I'm sending from a stereo drum loop (leftmost track) to three separate aux tracks which will become my kick, snare and hi‑hat.. I have a stereo track with a drum loop and three pre‑fade sends, each being picked up by an aux track with an instance of Kill EQ inserted. With the aid of these three plug‑ins, I can create artificial kick, snare and hi‑hat tracks from a single loop.

The buttons on the left of the Kill EQ window (below) determine which of three bands — high, mid and low — will be 'killed'. You can then use the Freq and Gain controls to make sure in each case that you get what you want, without what you don't want. For example, I've set the Low Freq quite low to make sure there's no snare on my kick track. 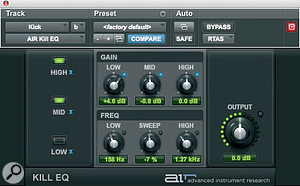 Let's take things further: set up two more aux tracks called Delay and Flange. Set up a send from the snare track to the delay, so you can add some delay to the snare sound, and use the other aux return to set up a flanger effect for the hi‑hat track. As we saw last month, the AIR Dynamic Delay plug‑in can be used to create ducking delays, and this is the perfect opportunity to use one. Send from the snare track to the delay, drop the loop out for a bar or two, and you'll hear how the Dynamic Delay opens up to give a decaying repeat that you don't hear when the track is running. To get that dance feel, on the hats try out the L/R offset on the AIR Flanger plug‑in and see how it opens out the stereo effect.

The AIR Talkbox plug‑in isn't about creating talkback mic effects: rather, it is a plug‑in that recreates the Peter Frampton voice‑modulated guitar sound, for those old enough to remember it. Originally, this was achieved by taking a tube connected to a compression driver (high-frequency PA speaker), and taping it to the vocalist's mic stand, close to the mic. When the vocalist put their mouth over the tube, the sound of the guitar would be modulated by their mouth shape and picked up by the vocal mic. It was an early kind of acoustic vocoder, and Talkbox can reproduce this effect without the plumbing or the loose fillings!

To start with, try it out on a relatively unprocessed guitar track and see how, as soon as you drop this plug‑in on the track, it already starts to do something magical. Try adjusting the Vowel control round to 'AE', then through 'EE' to 'EH', and hear the guitar start to speak these vowel sounds. It's even more effective if you bring the Formant control down to around ‑6. Now sync up the LFO and play with the rate and depth, and it just gets better. If you really want your guitar to speak, by automating the Vowel and Formant controls you can get a very convincing voicebox effect. Not bad for a plug‑in that comes free with Pro Tools 8!

Finally, another new plug‑in in the AIR series is Fuzz Wah. This is mostly self‑explanatory, but I wanted to share one cool trick I discovered for adding stereo interest to a mono guitar part. Take a mono guitar track and duplicate it, using Duplicate from the Track Menu. Leave all the boxes ticked, as you want a complete duplicate in this case (the Duplicate track function is also great when you have a load of plug‑ins and settings and you want to apply them to another track but without the audio, in which case you can de‑select the Playlist options). You should now have two identical tracks. Pan them hard left and right and put an instance of the AIR Fuzz Wah plug‑in on each. On the left, set up the plug‑in with just the Fuzz effect, as in the first screen, below. 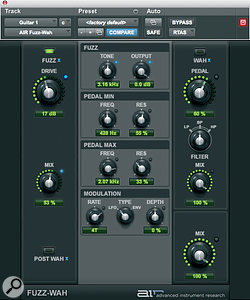 To create an interesting stereo guitar effect, try using two instances of AIR Fuzz Wah, set up as above and below, and panned hard left and right. 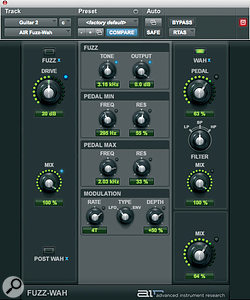 Then, on the right track, set up the plug‑in to have a fairly extreme wah‑wah effect, as in the second screen. Now play the two together: they offset each other and produce a great stereo guitar sound that will work in mono too.

I hope this little series will encourage you to seek out all these plug‑ins and get to know them better. I'm glad I did, because there have been some amazing surprises along the way.

What's In A Bus Name?

When you're creating aux tracks, as in several of the examples I've given here, you'll need to dedicate buses to them, and it's always worth renaming the buses so that you don't have to remember which bus is routed to which aux. Once you have created your send, right‑click it, select Rename and give it an appropriate name.

And while we're on the subject, here's another neat shortcut for naming multiple tracks. Instead of either double‑clicking each track name, naming it and hitting Return, or even using the Previous and Next buttons in the Track Rename window, try this. Once you have named the first track, hold down the Command and right arrow button (Mac) or Ctrl and right arrow (Windows). This will change the focus of the Track Rename window to the next track, saving you time and hand movements going from the mouse to the keyboard and back.