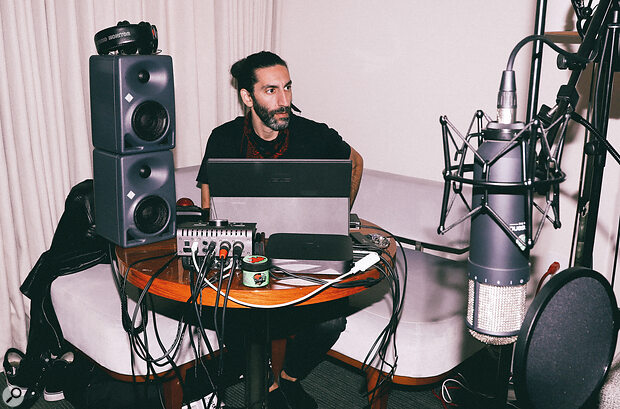 “Performance is the most important thing. Regardless of the recording setup or location, it’s all about the performance. And recording on location helps to keep it exciting. That’s the goal. I’ve spent many hours in the studio in my life, and being able to record professionally anywhere and at any time is just this very cool thing.

“I’m recording YoungBoy at his home in Utah at the moment, and because of house arrest restrictions, we can only work 14 hours a day from 7am to 9pm. In the past we worked 24 hours a day. I’d fly to where he was, set up the studio there and then we’d work for two weeks straight. I sleep in the studio, because I want to be ready to go whenever he is.

“He loves working early in the morning. So if he comes into the studio at 4am, ready to work, he’ll say, ‘Let me hear something,’ and I play him things until he says, ‘Pull that up.’ It’s how we recorded ‘Emotional Torn’ at 4am.”

Jason ‘Cheese’ Goldberg clearly is not a man to do anything by halves, or to conform to a nine‑to‑five mentality, or to do anything else that’s average. For starters, Goldberg’s entire raison d’être as an engineer, mixer and producer is based on mobile recording. For this reason he calls his studio and company Off Road Rec. Within that context, Goldberg does many things that are extreme, whether it’s working at any time of the day, working 120 hours per week, recording seven songs in one day, recording in cars, doing a final mix in five minutes, or putting 37 compressors on one vocal...

‘Cheese’ Goldberg conducts many of these activities when working as the righthand man of rapper Kentrell DeSean Gaulden, aka YoungBoy Never Broke Again, aka NBA YoungBoy, aka Top. Goldberg, meanwhile, picked up his nickname Cheese when he was working at a studio in Santa Monica. He managed to convince the city to stop construction work outside that was making it impossible to record. The studio manager reckoned that Goldberg was “a real Cheese Wiz” and it stuck. 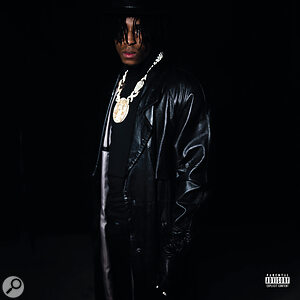 ‘Loner Life’- Written by Kentrell Gaulden, Jason Goldberg, Vilyam Vardumyan, Ethan Hayes, Brian Mitchell and Aaron Gilfenbain. Produced by Hurtboy AG, Hzrd, Haze, Zuus and Cheese.Goldberg played a central role in the making of YoungBoy’s third album, Sincerely, Kentrell (2021), which went to number one in the US, and also on the follow‑up The Last Slimeto, released in August, which went to number two. YoungBoy is as famous for his melodic rapping in the Southern hip‑hop and gangsta rap genres as he is for his problems with the law (he’s almost constantly been in and out of prison and probation since 2016, usually on gun‑related charges), and for being extremely prolific. In addition to his four albums, he’s over the last few years released 21 mixtapes and 68 singles.

“Top is one of the most driven artists I’ve had the privilege of working with,” comments Goldberg. “I think that’s why we get along so well, because I have the same drive. It’s an internal thing that you cannot teach. it’s something that you just need to do. We work really hard. Today, during our 14‑hour session, we recorded seven songs. Yesterday we recorded five. We recorded 300 songs for The Last Slimeto!”

It’s easy to see why Gaulden and Goldberg get on, despite their radically different backgrounds, with the former a 22‑year old African‑American from Baton Rouge in Louisiana, and the latter a white man a generation older from Beverly Hills. Goldberg started out playing bass as a teenager, and developed a keen interest in recording because he wanted to have more control over his music. In 2006, he attended the Institute of Audio Research in New York, continuing on to Full Sail University in Florida.

Afterwards he returned to Los Angeles to begin his internship at Capitol Records and he had the good fortune to run into Hans Zimmer’s engineer Alan Meyerson soon after. Goldberg began working at Zimmer’s studio Remote Control Productions in 2010. This is when the 120‑hour work week rhythm started. Following this, Goldberg worked at Windmark Recording. He’s currently under management with Hallwood Media, who call him “the most sought‑after music engineer in the hip‑hop industry at the moment”.

Goldberg met YoungBoy in 2019, and working with the young rapper provided the perfect opportunity to put his Off Road Rec studio philosophy into action. It’s an approach that came into being over many years. “I spent a decade or so working in professional studio facilities,” Goldberg explains, “in acoustically treated rooms with the best monitoring systems. This tuned my ears, not only to the acoustic environment, but the gear as well.

“Ultimately my ears are my greatest tool, because I take them into any environment, whether recording in a car, a hotel room, a tour bus. I mean literally anywhere. I’ve recorded on Hollywood Boulevard in a fitting‑room trailer. To be able to sit down anywhere at a table and have the equipment and know that nothing has changed in relation to the studio environment, except the space, is something I’m really proud of being able to achieve.”

Some of these recording spaces have indeed been highly unusual and extremely challenging. ‘Life Support’, ‘All In’ and ‘Reapers Child’ from Sincerely, Kentrell were all recorded, mixed and mastered on a moving tour bus, and Goldberg recorded one of the tracks from The Last Slimeto in YoungBoy’s Tesla. 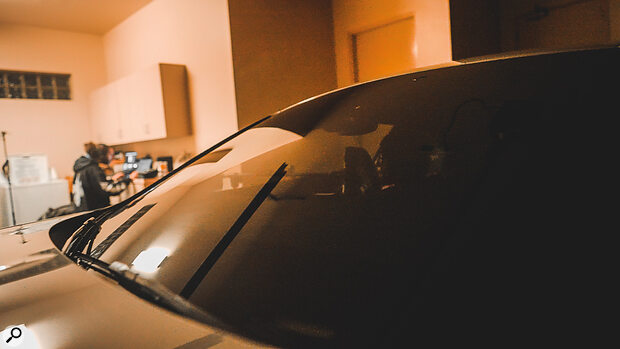 No location is out of bounds if it contributes to a good performance, and YoungBoy’s vocal on ‘Proof’ was tracked in a car.Photo: FlyGuyNick